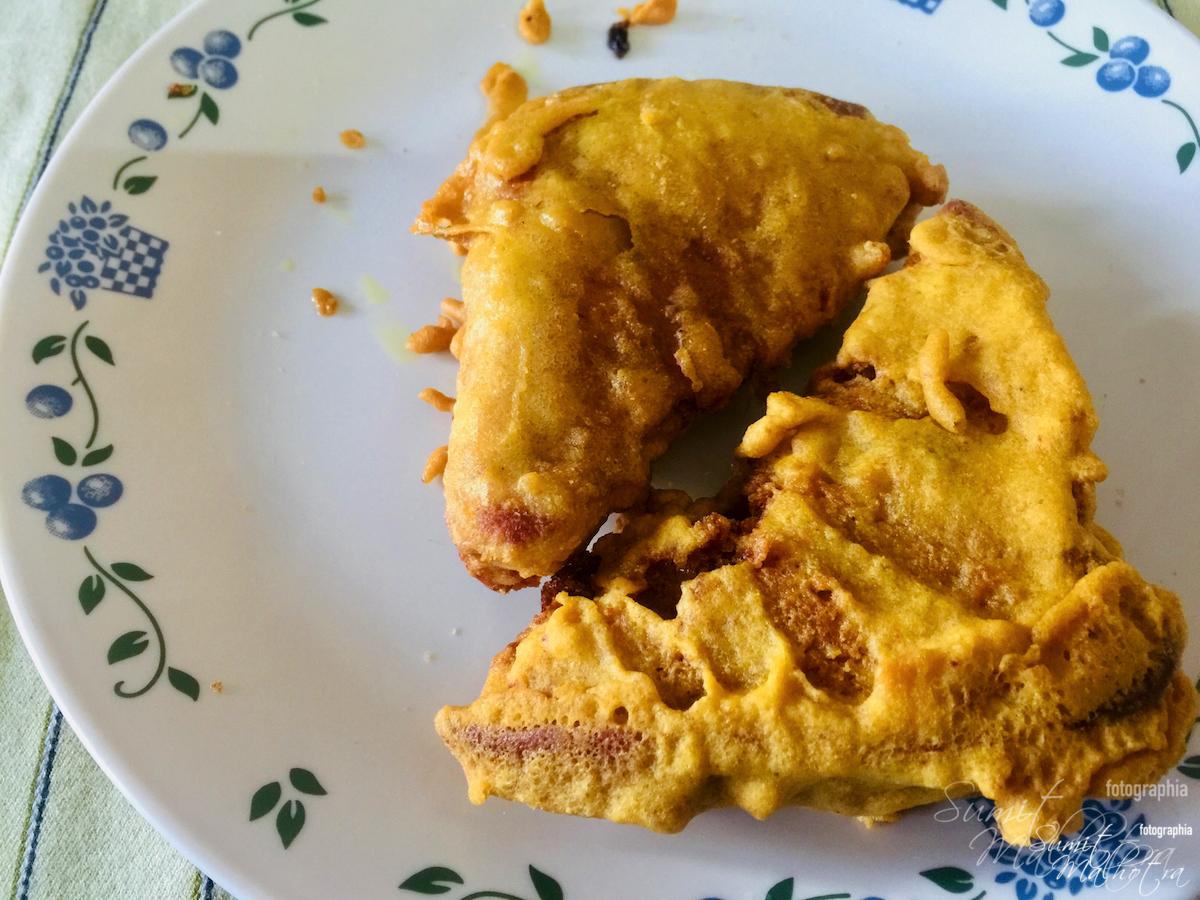 Bread Pakora is a very versatile & totally delightful anytime snack. Indians usually have it as a tea time snack or even breakfast. This aloo bread pakora recipe is relatively easy to make and immensely enjoyable.

Bread pakoras are a very popular Indian snack after Samosas, especially in North India. If stuffed, they are fairly filling so preferred for breakfast as well. It is fairly affordable so preferred. You’ll find at most Indian street food stalls/thelas and small restaurants.

Bread pakoras are basically bread slices coated with a gram flour batter and deep-fried. They may or may not be stuffed with a preferred filling. This is a recipe for making stuffed bread pakoras – an Indian street food speciality.

Part of the appeal of street food lies in the fact that it is so badass, with an aura of unhygienic unhealthiness that — instead of sending the eater running a mile off — makes them crave it almost as if it were the proverbial forbidden fruit.

PAKORAS FOR THE UNINITIATED

There are all kinds of pakoras. You can make pakoras out of almost anything. Usually, if you can dip it in a besan or split Bengal gram flour batter and deep fry it in a kadai, you can call it a pakora.  There are bread pakoras, onion pakoras, gobi (cauliflower) pakoras, paneer (cottage cheese) pakoras, aloo (potato) pakoras, even spinach pakoras. If you’re really daring you can deep fry full green chilli peppers to make chilli (mirch) pakoras There are even egg and tomato pakoras.  The sky is the limit out here.

It is a perfect tea/coffee time snack. You can make break pakoras plain without filling. These pakoras are crunchy outside, spicy and soft inside.

WHAT BREAD SHOULD I USE?

To make these pakoras, you could use brown bread, white bread or even multigrain bread slices depending on your choice. You can cut them diagonally, or have them squared. It is totally your choice.

Take thick bread like sandwich breads and not the fresh soft breads as they will become soggy and may break when we dip in gram flour (besan) batter.

INGREDIENTS FOR A BREAD PAKORA

A bread pakora needs everyday use ingredients usually available easily in your kitchen. And if not, then at a neighbourhood shop. These include your favourite bread, besan (Bengal gram flour), salt, finely chopped green chilli, finely chopped coriander, ajwain, chat masala and turmeric.

You can use the condiments of your choice. But, I recommend Dhaniya Pudina ki Chutney and even tomato ketchup. Serve it with some robust tea and you are good to go. Mini versions of these pakoras work well as party appetizers for kitty party or get-togethers.

The stuffing possibilites for these stuffed pakoras are virtually endless. Use your own creative ideas to come up with stuffings of all sorts that you’ll enjoy.

TO SUM IT UP

Bread Pakora is a very popular Indian snack, especially in North India. It is fairly filling so preferred for breakfast. Being fairly affordable makes it even more popular. You’ll find them at most Indian street food stalls/thelas and small restaurants at nooks and corners of the entire country. 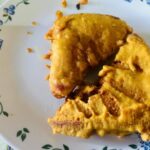