Once Upon a Pizza – Homemade Healthy Pizza Recipe 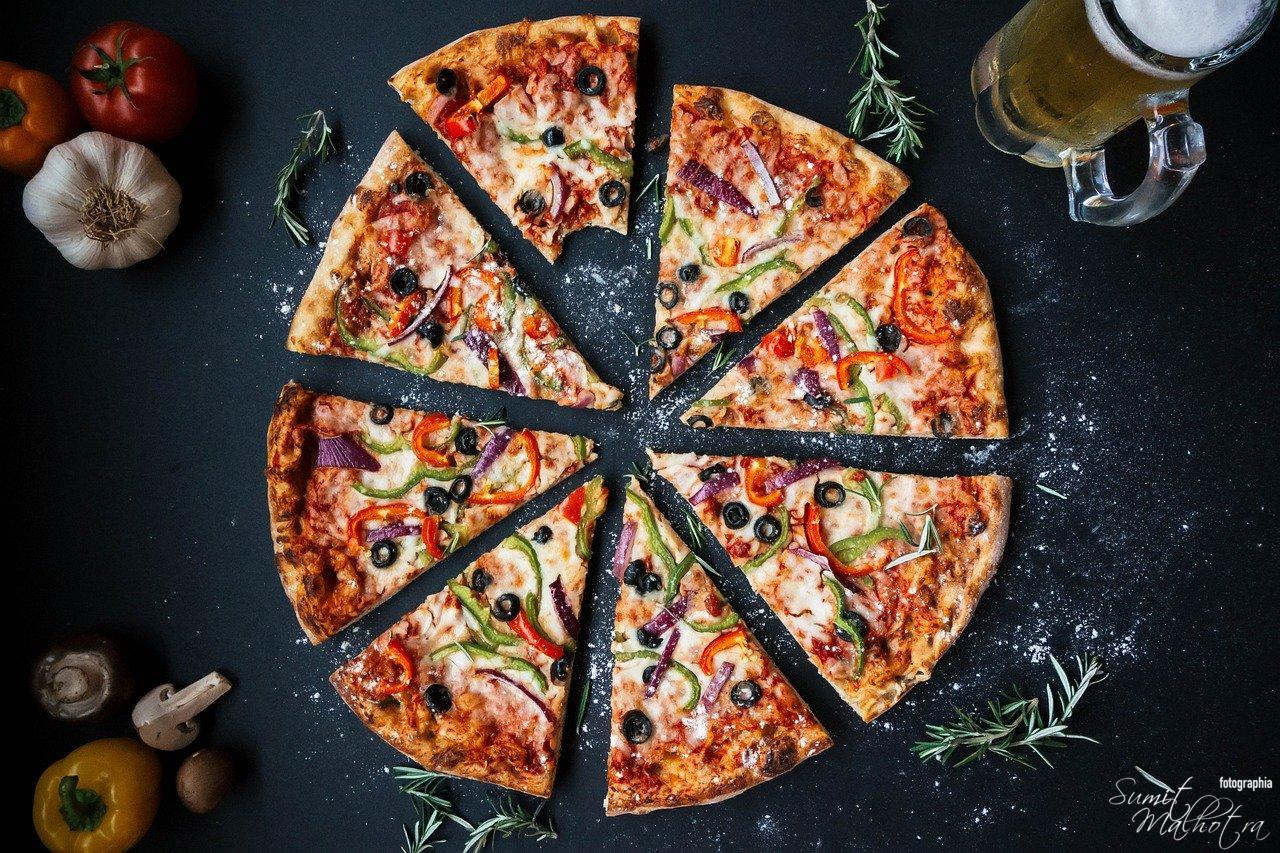 Once Upon a Pizza – Homemade Pizza Recipe

Pizza usually excites everyone across all age groups and is a fantastic hit almost always. In fact, I have not come across a person who says no to the flat, round, crunchy crusted, gooey cheesy bread spread with exotica of toppings. Now this goes for both vegetarians and non-vegetarians.

For all who think primarily “Italian”, when the term “Pizzas” is mentioned may find it interesting to know that Pizza is a type of bread and dish that has existed since times immemorial throughout Middle Eastern and Mediterranean cuisine.

So, it was not just restricted to Italy, where it is one of the national dishes made with the famous Italian tomato sauce and mozzarella cheese.

The word “Pita“, as in bread (not to be confused with “Pitah” or father in the Hindi language), is still commonly used in the Mediterranean and is a staple to them on an every meal basis and may have been derived from Pizza or vice versa.

Historically pita was considered bread for the “poor” and remains reasonably priced all over even today. Even pizzas overseas do not cost an arm and a leg.

Though, in today’s India just a large pizza for an average family of four can set one back by more than a few hundreds of rupees. Throw in some garlic bread, a side order and drinks and one averages a bill that is around Rs. 800. Hence, my guess is that this itself makes pizza a dish which many in India may not easily be able to afford.

Evidently, pizzas are normally found on urban plates and are restricted to the larger Indian cities.

Also, it is interesting to see that in India, pizzas have gone local with toppings like paneer (cottage cheese), tandoori chicken (spiced roasted chicken), chicken tikka (roasted morsels of spiced chicken), and lamb keema (mutton or lamb mince) making a notable appearance and which have been a big hit with the local populace.

Besides localized basic variants available in neighbourhood bakeries and cafe’s to American chains like Domino’s, Pizza-Hut, Papa John’s, Sbarro or gourmet pizzas with exotic and imported ingredients available at specialty Italian restaurants, we have internalized pizzas as our own and with a pizzaz that is unique only to us Indians.

Also, contributing to the girth of Indians are our own local chains like Slice of Italy, Smokin’ Joes, Pizza-Square (they make square pizzas and don’t cut corners :D) to name a few.

As much as we enjoy them and as much as they are scrumptious, pizzas are still considered to be high in total fat, saturated fat, sodium and calories. Hence, pizzas are usually qualified as unhealthy, especially commercial pizzas with their thick crusts, double cheese crusts, cheese-filled rims etc, given their highs in all categories.

One slice may contribute at least 300 calories which when consumed leads an immediate assault on the cardiovascular system. Ask yourself if you have ever felt extremely lethargic after a pizza meal? How true is that?

This just maybe, since commercial pizzerias thrive on serving extra toppings of just about everything in their containers and we just like the idea of adding on at least a generous extra cheese topping always, if not more. Having said and done this a lot of times, I also firmly believe that pizzas can be really healthy. Stumped?

In my opinion and often used practice, if you make your pizzas with the right (and carefully measured) ingredients at home, pizzas can turn out to be quite healthy and nutritious. Pizzas made at home especially with kids involved, make them big hit with the kids. Then the kids make you feel like a superstar when the shower of hugs and accolades comes right to you after the last crunch.

The entire process for making pizzas from the bread to the table is laborious and time consuming especially if you are taking the freshly baked route. However, there are still a few tricks that you can use to cut down on the preparation time. 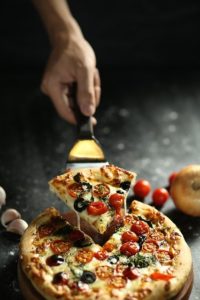 How to speed up the process?

How to make a healthy pizza at home?

How to go about it?

Psst: Be creative with your toppings. Vegetarians can use any combination made from corn off the cob, pineapple, broccoli, mushrooms, capers, onions, tomatoes, olives, peas, roasted garlic, and zucchini.

You can also add nuts to your pizza including, almonds, peanuts, pistachios, pine nuts or walnuts.

For added seasoning and spice, you can play around with chilli, coriander, cumin, cardamom, thyme, kaffir lime leaves and rosemary. A seafood fiesta pizza can add to it prawns, smoked salmon, shrimps, tuna or anchovies.

Load up meatier pizzas with bacon, chicken done in lot of ways including with BBQ sauce, Masala gravy, Cajun spices.

The options are myriad. You can also add chorizo, fried pork, ham, salamis, meatballs, keema, pepperoni, sausages, smoked turkey slices, and even duck if you can lay your hands on it. 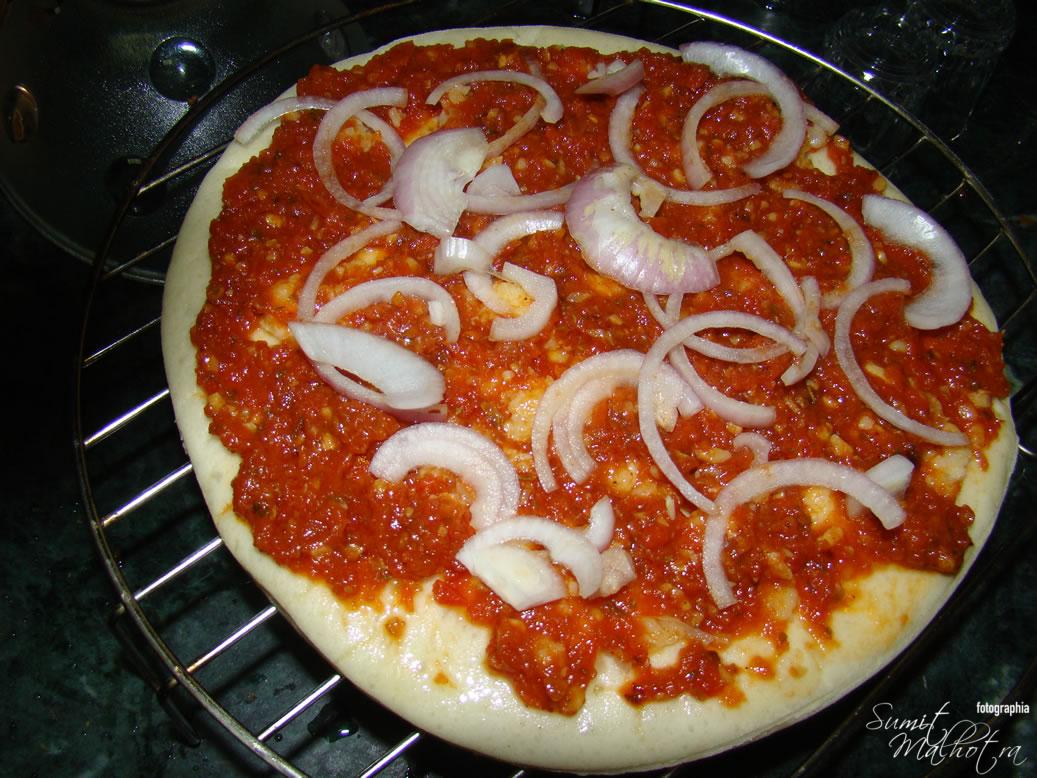 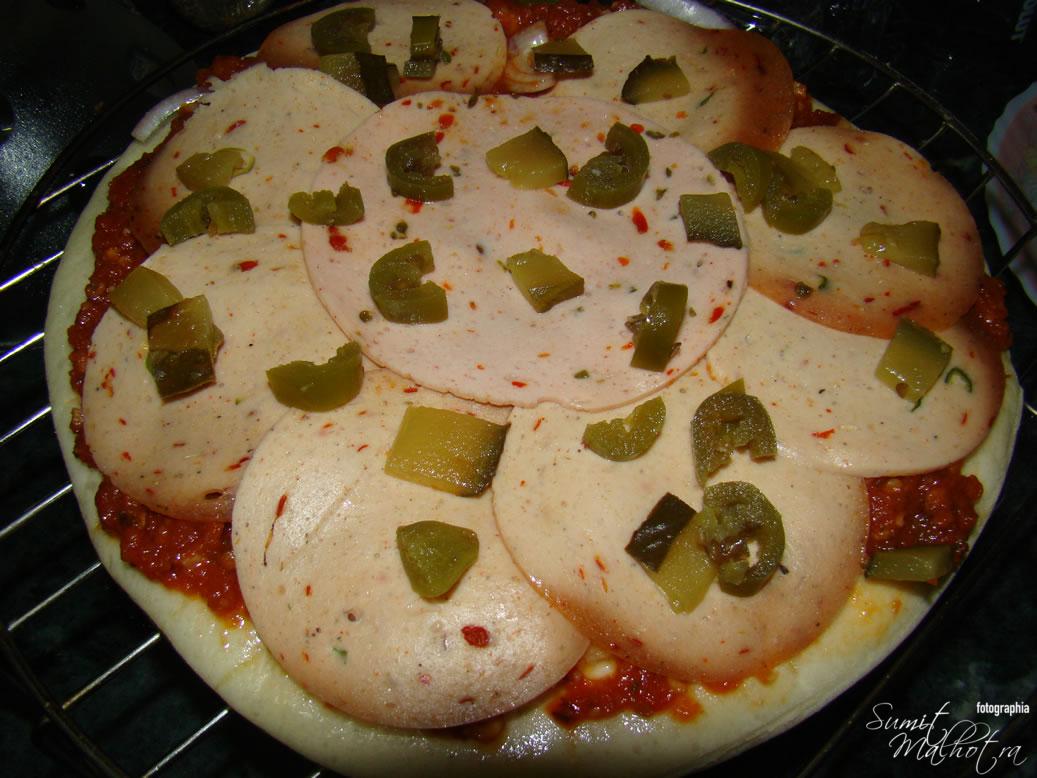 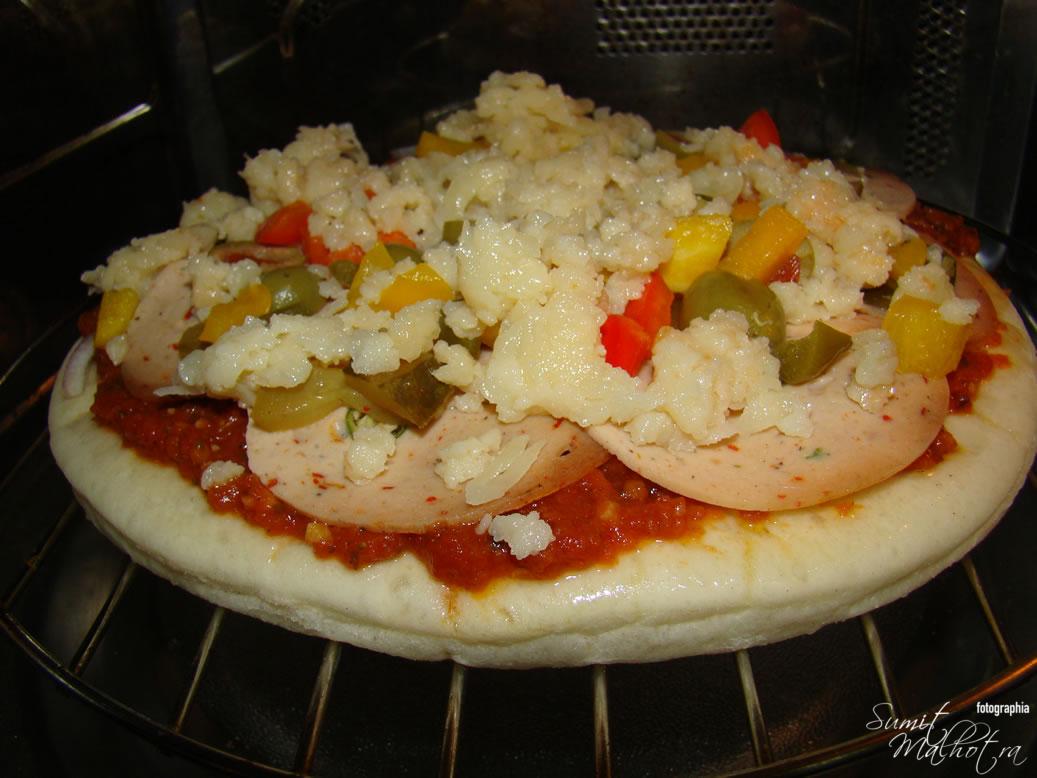 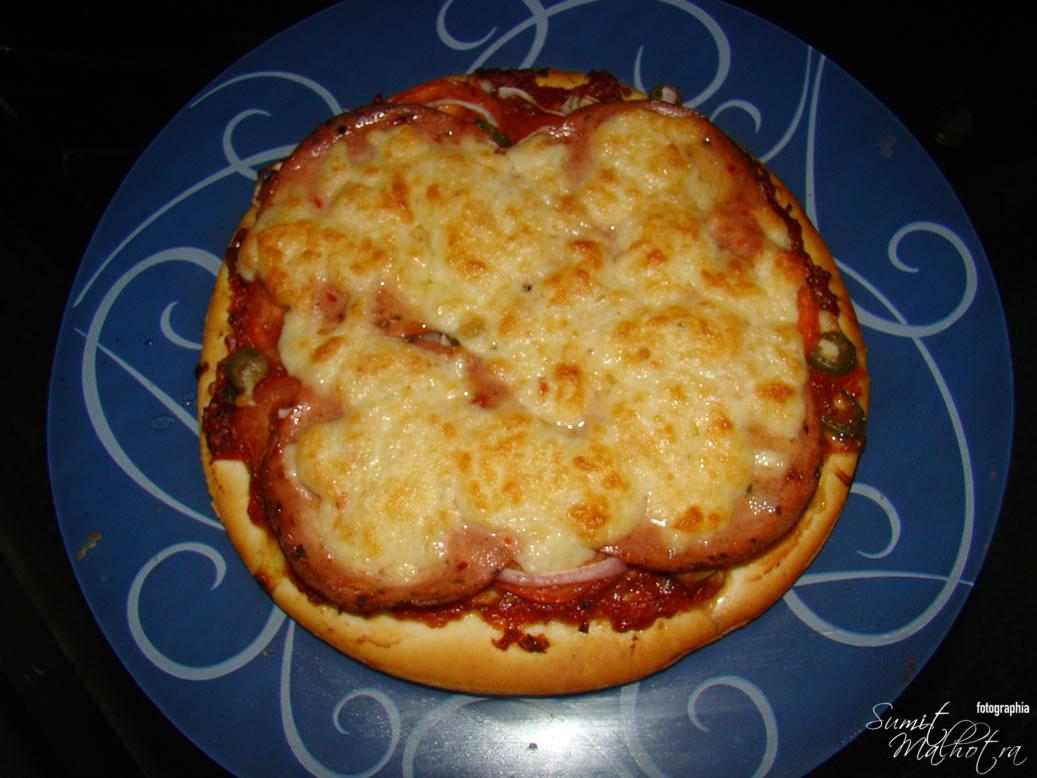 Pizza Right out of the Oven 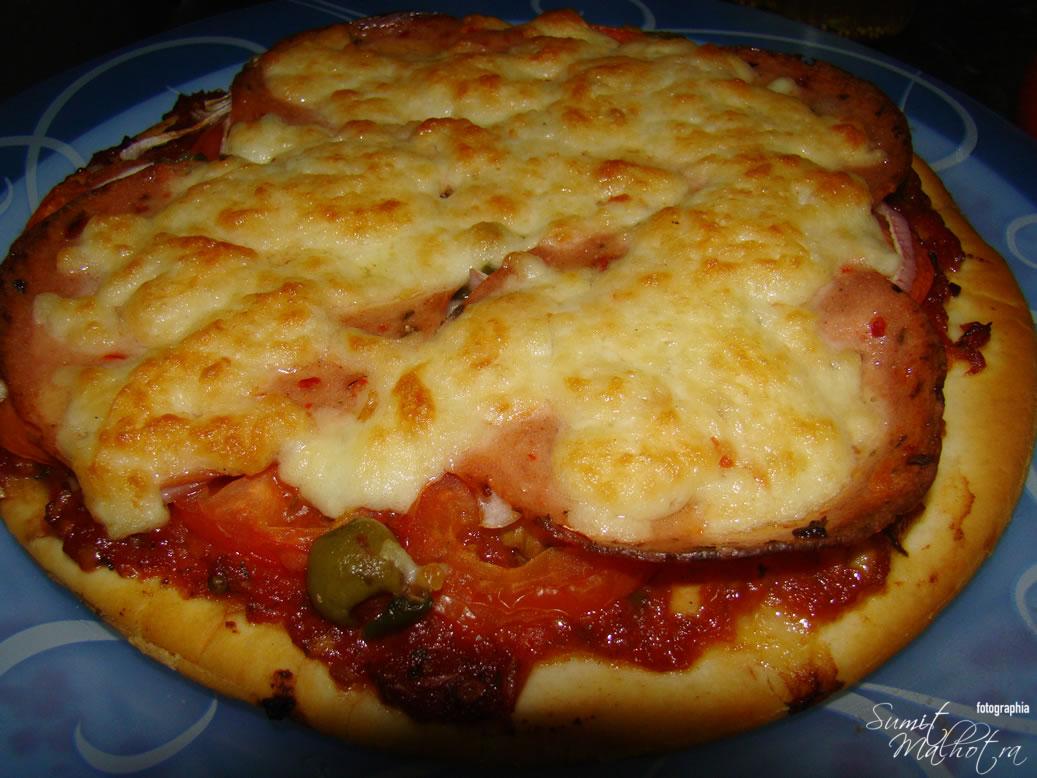 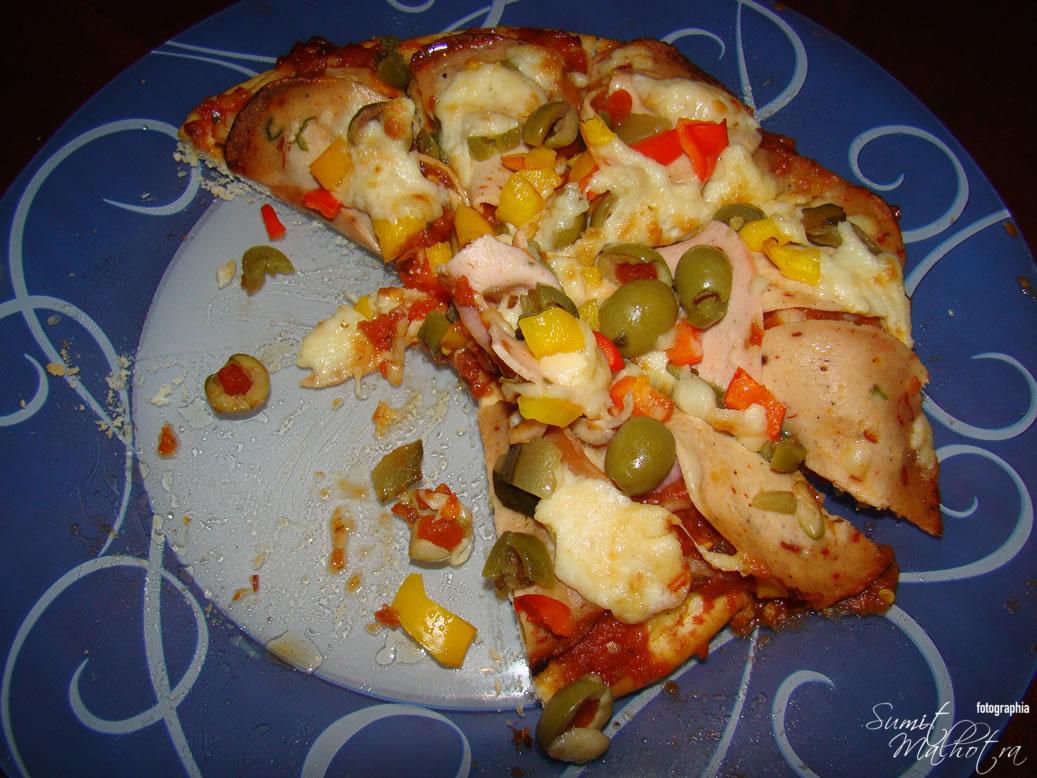