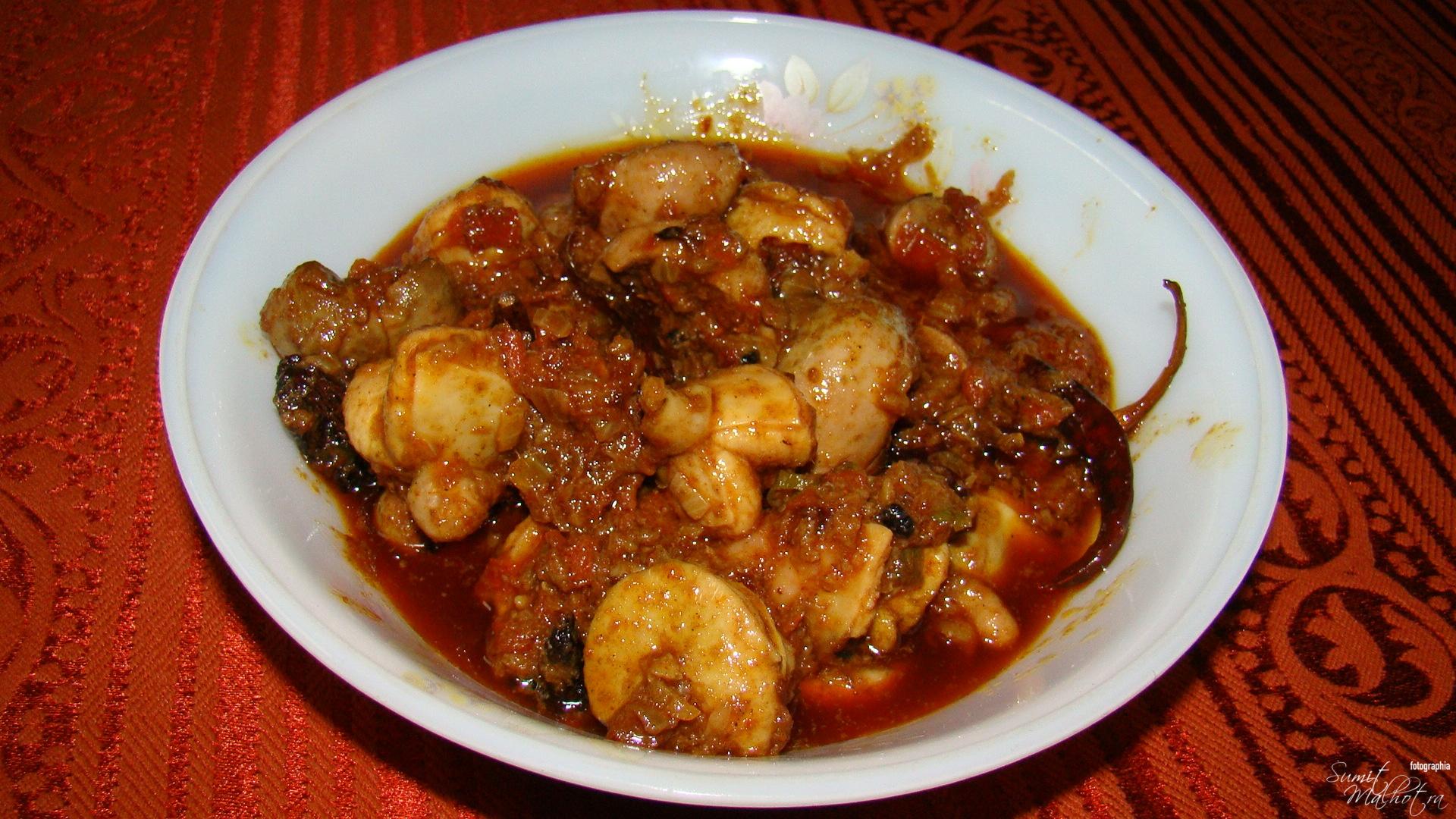 Apart from being considered as gourmet food in International cuisine, the offal or sweetbread are a warehouse of nutrition and taste. Offal usually refers to the internal organs and entrails of a butchered animal. There is no established etymology for sweetbread. It may be so since the organs are sweeter tasting while the bread may be a derivative of Old English brǣd (‘flesh’ or ‘meat’). Offal have a much higher nutrition quotient since they are rich in minerals like sodium, phosphorous and iron. Offal also contains higher amounts of Vitamins A and C (especially liver and spleen). The flip side is they contain purine from which uric acid derives so not suitable for people with a uric acid or gout problem.

Offal get used as French Pates (Chicken Liver Pate) & European Sausages and really all over the world. Haggis is a favorite of the Britons. In the Middle East & Other Islamic States the testicles are considered to be aphrodisiacs and vitality enhancers. A very accomplished Pakistani Foodie once told me that testicles were strictly for consumption by males only in yesteryears. What she didn’t say if this had changed in the recent times. Offal are use widely in the Indian Subcontinent, South East Asia & China as stir fried dishes in various formats. Check all offal recipes.

I present to you my really spicy recipe of Masaledaar Gurde Kapure (goat’s kidneys and testicles) which finds high favour in the North India, especially with the Punjabis as their favorite evening snack. Read on for the magic.

How to go about it? 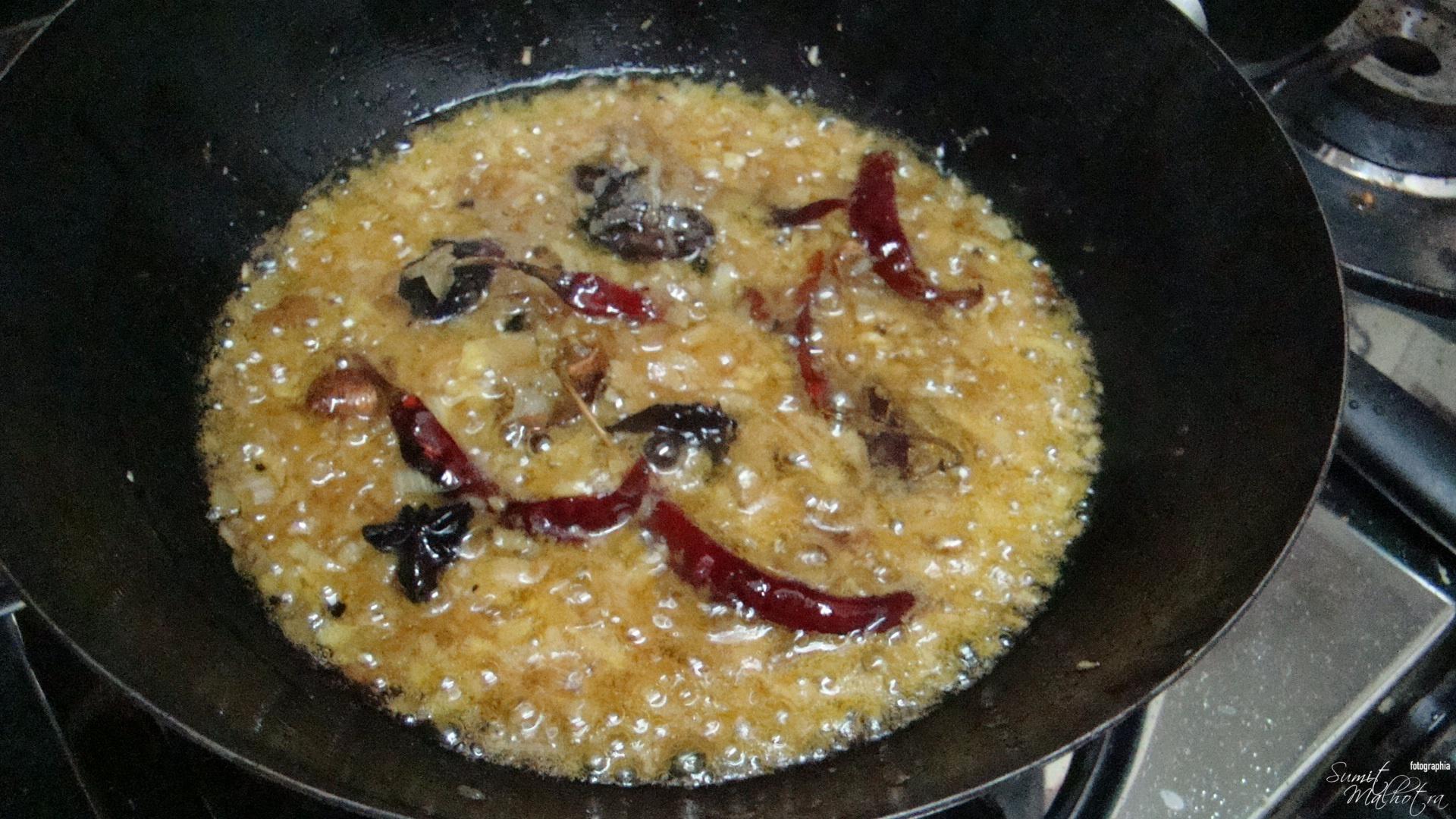 Season the oil and temper the spices 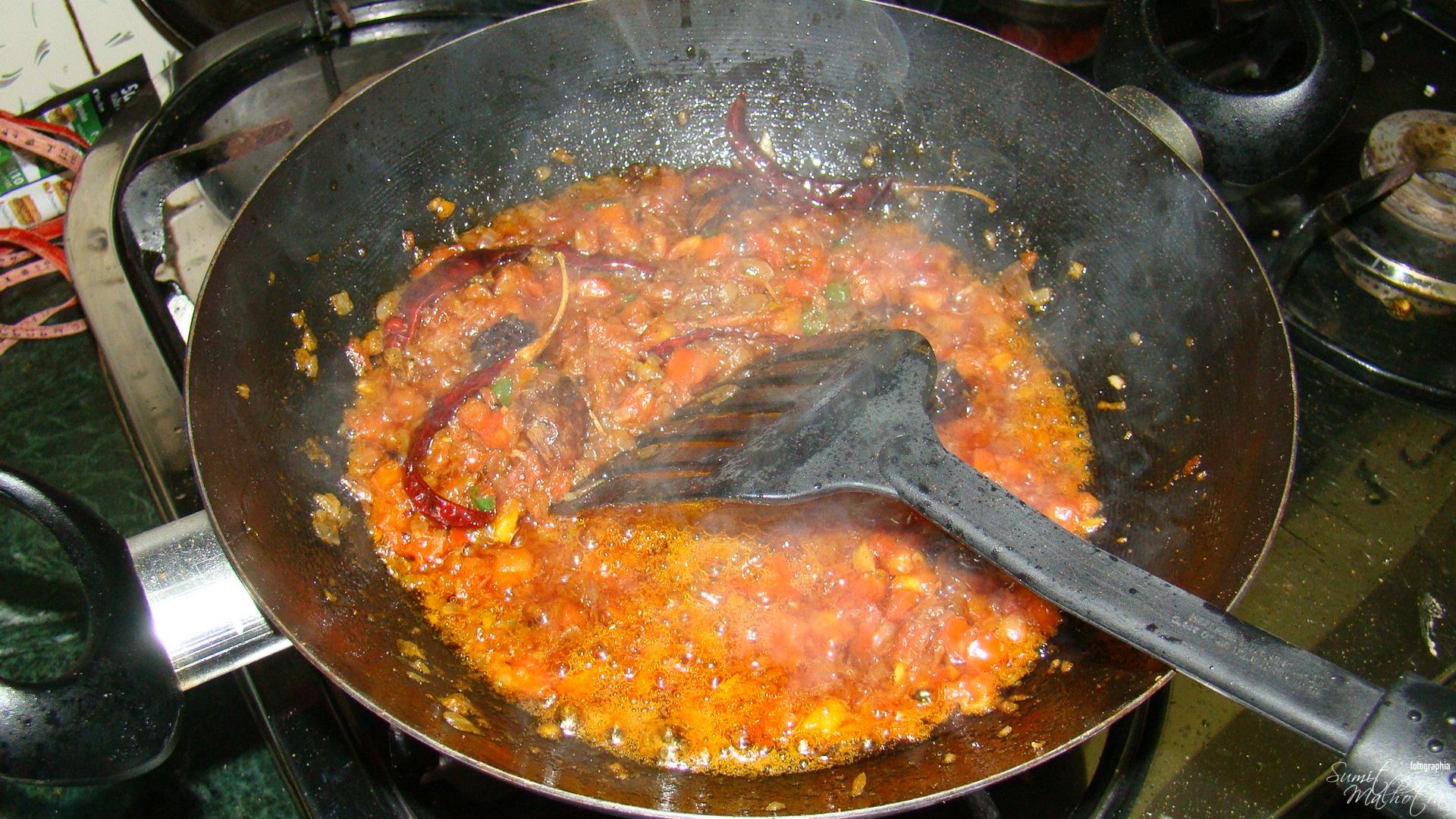 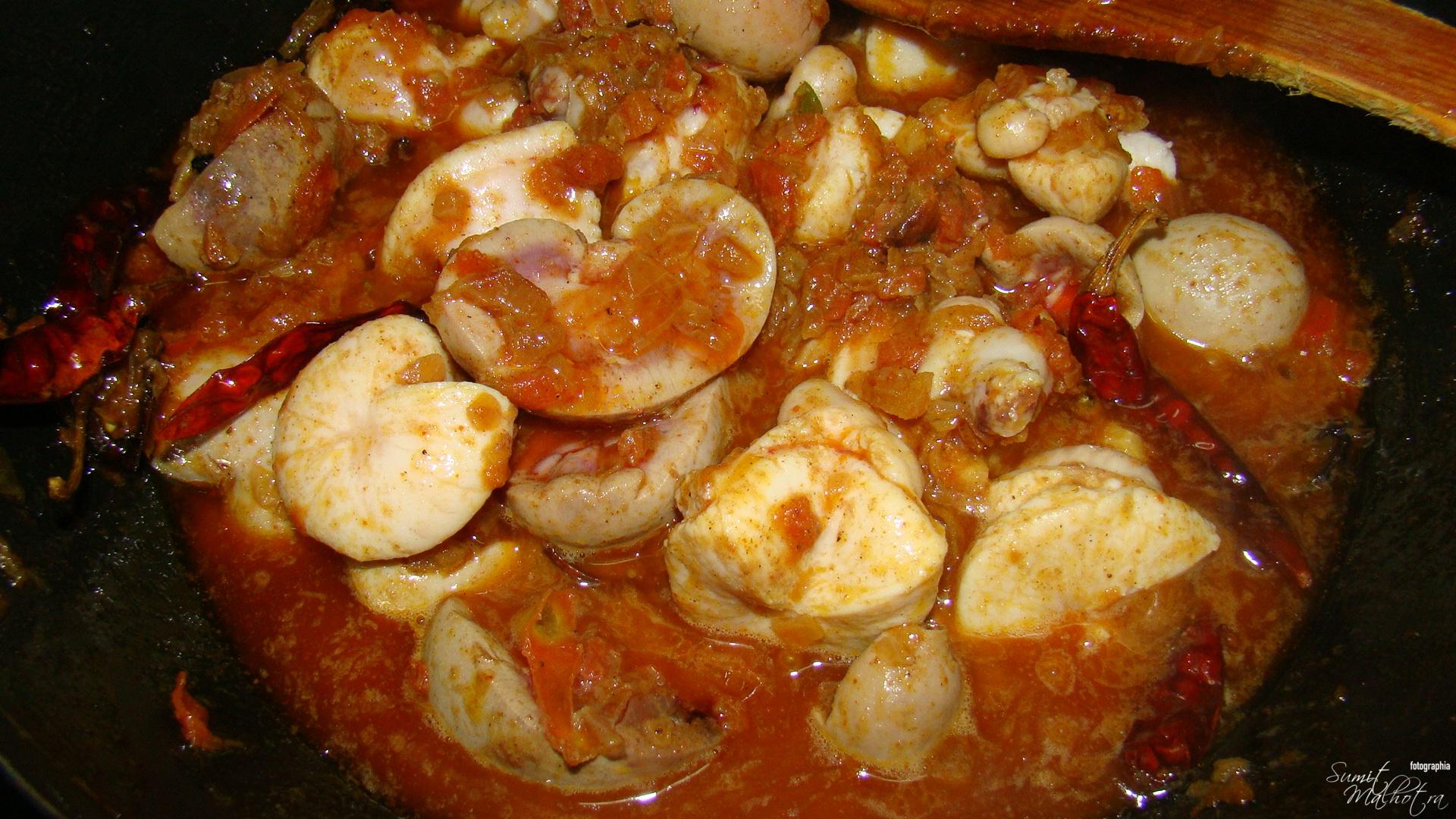 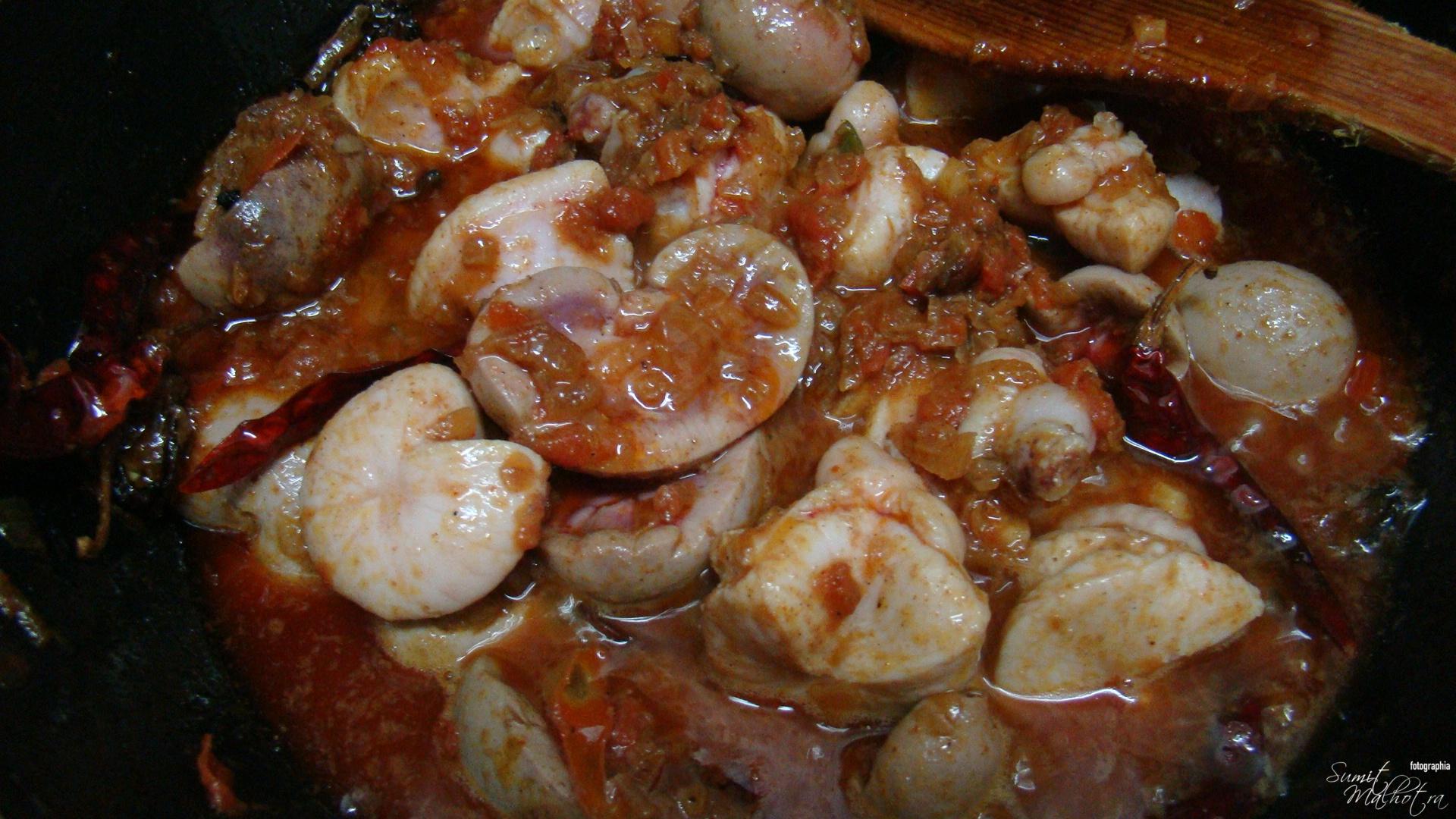 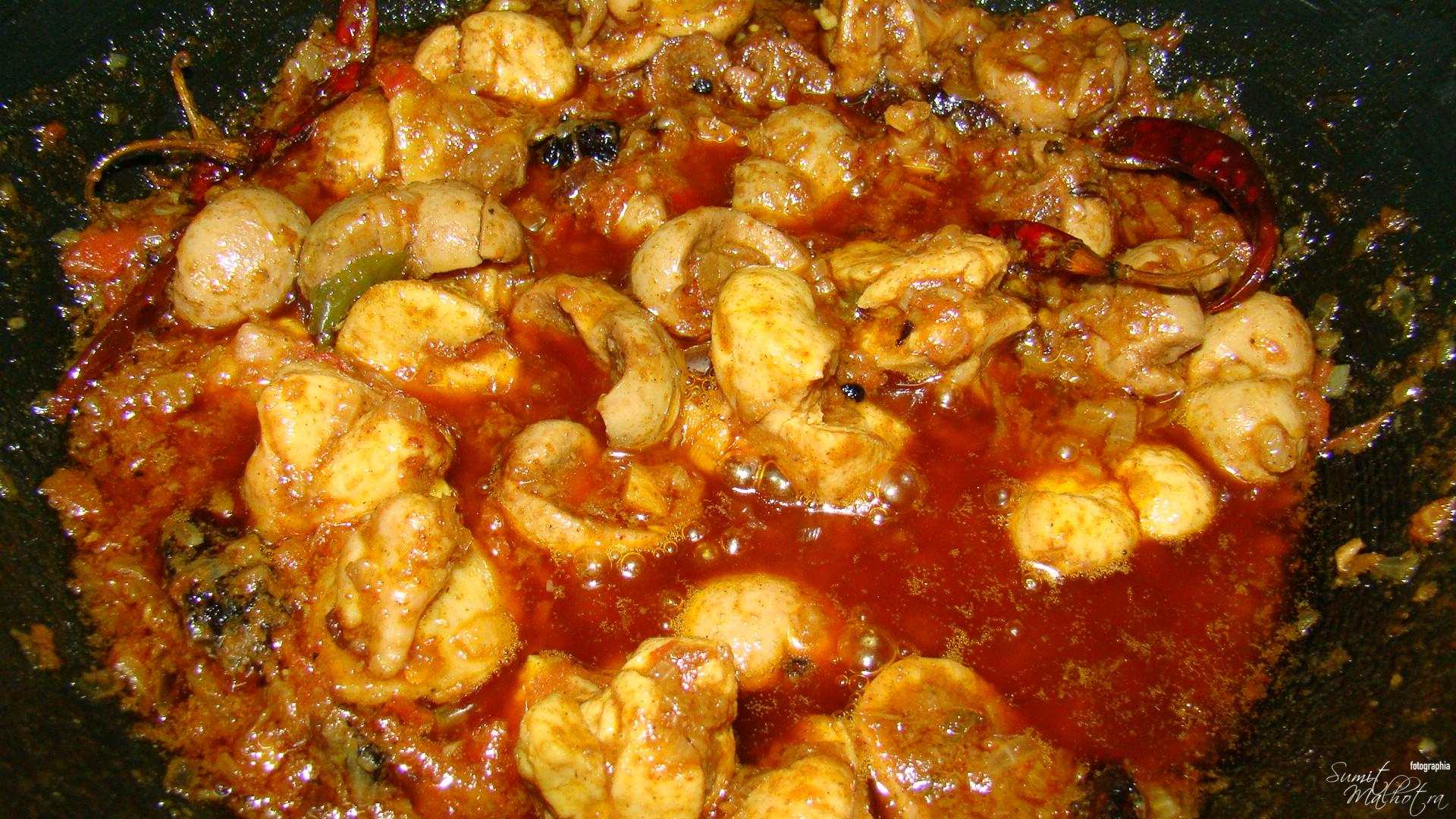 You can bring #espresso #drinks to your #home without the fuss of a complicated espresso #machine with the #Bialetti #Brikka #Moka #Pot. This #stovetop espresso maker requires only #coffee, #water, and a #hot #surface to #brew #delicious espresso. Brikka is a must have for coffee #lovers.

It only takes five minutes to make the best-tasting #chillioil with #extra #fragrance, #nuttiness and #smokiness! {#Gluten-Free, #Vegan}. #BhutJolokia #chilli #oil offers an #intense #sweet chilli #flavour that is quite #fruity. Big flavour, big #spice! With a pleasant blast of #heat. Drizzle it over anything and everything!

#Thai #Chicken in #GreenCurry is great and #delicious for quick weeknight dinners. It is #super #fragrant, and guaranteed to warm you up with its #spicy #creamy #deliciousness! It is also an extremely easy to make and naturally gluten-free and dairy-free. Feel free to customise it and make it #vegetarian (or #vegan). Or, you can use your favourite #protein (#tofu, #shrimp, #pork, #beef, etc.). #Recipe @ https://gosumitup.com/recipes/thai-chicken-in-green-curry-recipe #beautiful #food #hot #yummy #foodporn #fresh #foodie #hungry #foodgasm #picoftheday #foodstagram #foodblog #instafood ...

#Something was #cooked #today. #Clue in the #pic. #Guess what was it 😀

These #multigrain #sandwiches, topped with #ricotta and #tomatoes are the perfect #savoury #breakfast but are also perfect as a quick #snack or light #vegetarian #dinner. #Toast your #bread slightly before you use it, to get more crunch and flavour out of it. Recipe @ https://gosumitup.com/recipes/tomato-ricotta-sandwich

This #ricotta #cheese speciality is like a cheese-stuffed shell but in a #sandwich! Take the #Italian #classic to a new level with #creamy Ricotta cheese and #chicken #ham with a touch of #Bengali #mustard. This is a sandwich to please every #kid’s palate. So go for it and enjoy. Recipe @ https://gosumitup.com/recipes/chicken-ham-ricotta-sandwich

Peeps!! Have this everyday to boost your #immunity and keep your #bloodvessels #healthy. Ideally pour it into a #copperglass, let it cool to a drinkable #temperature and consume or simply sip it like #tea. If you find it #healthy, do comment on the article please. And, do share it with your families and friends. Recipe @ https://gosumitup.com/recipes/rejuvenating-water-more-than-regular-h2o

#Tartines are fun, versatile, and, most importantly, lighter than #normal #sandwiches. They’re an ideal party #appetizer, yes, but also a #decent lunch or dinner. They are a #feast for the eyes and #tastebuds. They are all about showcasing creative #ingredient combinations on artisan breads and serving them on beautiful boards and #platters. With three #savoury tartines plus a #sweet one for #dessert, you’ve got a party. Recipe @ https://gosumitup.com/recipes/egg-tartines-no-fuss-snack

#Simple and #easy to make, #PalakPaneer is a really #popular #Indian dish where Indian cottage cheese or #paneer is cooked with #spinach #puree. It is #delicious and #healthy! Goes very well with #khasta #roti or #parantha. It is every vegetarian’s #delight!
Recipe @ https://gosumitup.com/recipes/palak-paneer-indian-cottage-cheese-spinach

#BreadPakora is a very popular #Indian #snack, especially in #NorthIndia. It is fairly filling so preferred for #breakfast. You’ll find them at most #Indianstreetfood #stalls or #thelas and small #restaurants at nooks and corners of the entire country. Recipe @ https://gosumitup.com/recipes/bread-pakora-versatile-totally-anytime-snack ...

#Deven's at #Lodhi - #Cafe & #Coffee Store is warm and inviting with the owners at the helm. It is divided into #two parts - the #store and the cafe. It's reliably clean. The staff is quite attentive and if you want "indulging" too. The cafe is lined up with well-appointed machines and tools that create the #signature coffee #magic for you. Read more @ https://gosumitup.com/reviews/devans-at-lodhi ...

#PahalwanDhaba #Sikanderpur is a rustic #Indian eatery in #Gurgaon. It serves great #food and retains its #original #character sans the #chaarpais albeit. Overall! If you want to eat great local food and if you don’t give two hoots about the rustic surroundings and plastic chairs and can easily handle the #ghee laden food, do visit #Pahalwan #Dhaba at least once. ...

At #AmanChicken #Ludhiana the ambience was smoky, noisy and unruly. The #food was quite #pedestrian but #delicious overall. The #service was #indifferent and #sloppy but #rapid. You should #visit at least once. Read all about it @ https://gosumitup.com/reviews/aman-chicken-ludhiana-delicious-pedestrian-food ...

#Pasandah.In #Gurgaon serves pretty average #Mughlai #food in my opinion. Their #packaging is #messy so you ought to be careful while handling the delivered food. You just may wish that you should have worn an #apron after opening the food #packages.

Read all about it @ https://gosumitup.com/reviews/pasandah-in-gurgaon-very-average-mughlai-food ...

The speed of #delivery, the #natty #packaging, fantastically enamouring #sushi with ample #wasabi & #gari was an awesome treat. Gurgaon'ites must try Oishii Wok Gurgaon for sure. #Oishiiwok. Read all about it here > https://gosumitup.com/reviews/oishii-wok-gurgaon-delightful-sushi ...

It only takes five minutes to make the best-tasting #chillioil with #extra #fragrance, #nuttiness and #smokiness! {#Gluten-Free, #Vegan}. #BhutJolokia #chilli #oil offers an #intense #sweet chilli #flavour that is… instagram.com/p/B-mO…

#Thai #Chicken in #GreenCurry is great and #delicious for quick weeknight dinners. It is #super #fragrant, and guaranteed to warm you up with its #spicy #creamy #deliciousness! It is also an extremely easy to make… instagram.com/p/B-jj…

Have this everyday to #boost your #immunity and keep your #bloodvessels #healthy. Ideally pour it into a #copperglass. Cool to a drinkable temperature and consume or simply sip it as #tea. And, do share it with your #families and #friends. gosumitup.com/recipe…