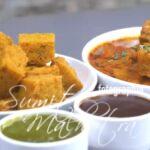 Bagelkhand or Baghelkhand is a region and also a mountain range in central India that covers the northeastern regions of Madhya Pradesh and a small area of southeastern Uttar Pradesh.

Rewa in Madhya Pradesh used to be a hunting ground for maharajas. Rewa, a city in the northwestern part of Madhya Pradesh, is one such chapter. On the surface it might resemble any other hotbed of industrialisation, but its heart overflows with myriad legends.

The kingdom of Rewa was home to the blue-blooded Baghels, descendants of the Solanki clan, who ruled Gujarat from the 10th to the 13th century. A string of rajas and maharajas ruled this erstwhile princely state, the last being Maharaja Martand Singh Ju Deo, who was most famously known for capturing Mohan, the white tiger.

How did Baghelkhand Cuisine Evolve?

Baghelkhand Cuisine forms a part of Madhya Pradesh gastronomes of which Malwa, Mahakoshal, and Gwalior are the rest. Madhya Pradesh is known for its royal Sailana cuisines where hunting was a favourite recreation for the Royals.

Out for a hunt and after striking down their targets, the royals would boast about their records over slow-cooked game dishes prepared by their khansamas (royal cooks).

It was this tradition of feasting and feeding others that gave birth to the glorious culinary heritage of Rewa we know as Baghelkhand cuisine.

Rewa is a fertile and arable land within the network of rivers Son and Tons as well as their tributaries. This supports the growth of a variety of cereals, dals, and leafy vegetables that form an indispensable part of Baghelkhand cuisine.

A typical Bagheli thali boasts of an eclectic mix of vegetarian and non-vegetarian dishes that might look simplistic but taste unique. The confluence of different cultures – Rajputana, Gujarati, and Afghani—is what makes the royal cuisine of Rewa unique.

The food of the royals in Rewa is nutritious and offers several health benefits. In any other royal kingdom, the richness of food is more important, whether it is the gravy or the overuse of dry fruits. In this part of the world, the simplicity of food is what stands out.

Indrahar (Food of Lord Indra) – It is prepared using five lentils—arhar (pigeon pea), masoor (split red lentils), chana (split chickpeas), moong (yellow lentils), and urad (split black lentils) dal. These are coarsely ground using a sil batta and mixed with a variety of spices, including coriander powder, salt, turmeric, and garam masala. It is then left undisturbed to ferment overnight. They are then shaped into cakes, steamed and deep fried and further immersed in a curry whipped with gram flour.

Bagheli chicken – Bagheli Chicken contains generous amounts of whole spices or khada masala. It is made by dry roasting the spices and grinding them into a fine powder. The chicken dish is marinated in this and cooked low and slow.

Surva Murg – This chicken is made with a heap of ginger and various whole spices, which can be served as a soup or with Indian breads or rice.

Bagani Chutney – A delicious chutney made of wild cherry tomatoes, small and sharp chillies and garlic.

Hingora (हिंगोरा): It is wet preparation (Kadhi) made from gram flour (Besan) with generous usage of asafoetida but no use of buttermilk (Mahi).

Anwariya (आंवरिया): It is wet preparation (Kadhi) made from gram flour (Besan)with usage of paste of saute gooseberry (Anwala), spices and condiments again no use of butter milk (Mahi). The sourness comes form gooseberry.

Buy the Book on Baghelkhand Cuisine