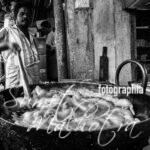 Bawarchi | who is a bawarchi?

A Bawarchi means a cook in Hindi. It is synonymous to a Waz in Kashmiri, a Maharaj in Hindi and a Khansama in Urdu. A bawarchi is equitable to the kitchen rank of Commis in the English culinary terms today.

So in effect, a Bawarchi is a person whose occupation is to prepare food for the table; one who dresses or cooks meat or vegetables for eating. It is a term used for cooks who specialise in North Indian & Mughlai cuisine.

Bawarchi is the BRF (Bharat Rakshak Forums) nickname for Apple Inc.’s CEO, Tim Cook. The reason for this nickname is because the word Bawarchi is a Hindi word that means “cook” or “chef” and is a pun on his last name.

Accidental Bawarchi: A Unique Playbook to Liberate your Cooking Imagination … Buy it to read it. Links are given below.