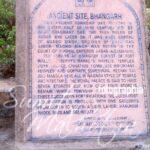 Briefly About Bhangarh | Bhangarh is Home to Bhangarh Fort

The Bhangarh Fort is a 16th-century fort built in the Rajasthan state of India. It was built by Bhagwant Das for his younger son Madho Singh. The fort and its precincts are well preserved.

The journey to Bhangarh takes approximately 1.5 hrs and is 65 km from Jaipur. Its old buildings include the Hindu temples of Gopinath, Shiv (Someshwar), Hanuman, Ganesh, Vishal Devta, Lavina Devi, and Keshav Rai.

Other buildings include shops and dhabas along the main road, several havelis, a mosque, and a palace. The palace is protected by two inner fortifications across the valley. The town is separated from the plain by ramparts with five gates.

Trespassing near Bhangarh is legally prohibited between sunset and sunrise as it is said to be haunted. Although nothing has been proven, it is said that paranormal activities occur regularly at nights at the Bhangarh Fort. This is the reason locals have called this place one of the scariest places in India.

According to locals, spirits enter the place after sunset and thus nobody is allowed to enter the borders of Bhangarh during this time. A signboard posted by the ASI (Archaeological Survey of India), which is a Government of India organization, specifies these instructions.

How to reach Bhangarh  Fort?

By Train: Bhan Kari Railway Station (BAK) and Dausa Railway Station are the nearest stations to reach Bhangarh fort. Rajasthan Sampark Kranti Express, Mandore Superfast Express, and Ala Hazrat Express are a few frequently running trains that will take you to Bhangarh.

By Road: Tourists who are enthusiastic about road trips may either take the tourist buses to travel to Rajasthan or may drive to the place in their personal vehicle or by cab. The best part about traveling by road is that it gives the opportunity to give a sneak peek into the village life, farms, and Dhabas.

What is the Best Time to Visit Bhangarh Fort?

Summers are hot on most days, but you do have occasions when the climate is pleasant. Monsoons are a complete no-no; the humidity rises to high levels during the brief rainy season and the rain can be pretty heavy.

The best time to visit is between the months of November to February. The weather is pleasant which means, you can comfortably tour the place at your own pace.

What is the legend of Bhangarh?

According to legend, a sadhu named Baba Balak Nath lived within the fort area, and it was his injunction that any house built in the precinct of the fort should not be taller than his own, and if the shadow of any such house fell on his, it would result in destruction of the fort town.

According to another tale, a wizard adept in black magic named Sinhai fell in love with Princess of Bhangarh, Ratnavati. She was the daughter of Chatr Singh ands liked by one and all for her immaculate beauty and polite behavior. One day, wizard Sinhai followed her to the marketplace and offered her a love potion; however, she refused it, throwing it onto a large rock that consequently rolled onto the wizard and crushed him to death.

Where do I stay in Bhangarh?

Read & know more about Bhangarh in Posts below