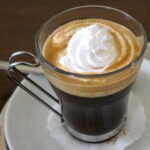 What does Biedermeier mean?

The Biedermeier period refers to an era in Central Europe between 1815 and 1848 during which the middle class grew in number and the arts appealed to common sensibilities.

It began with the Congress of Vienna at the end of the Napoleonic Wars in 1815 and ended with the onset of the Revolutions of 1848.

Although the term itself derives from a literary reference from the period, it is used mostly to denote the artistic styles that flourished in the fields of literature, music, the visual arts and interior design. It has influenced later styles, especially those originating in Vienna.

In this imperial era of Biedermeier around 1828 numerous Viennese coffee houses were opened. This began with the Second Turkish Siege of Vienna around 1638. Fleeing the city, the Turks left countless treasures behind, among which the most valuable was probably coffee.

Since those old days, painters, poets, philosophers and musicians have spent their days working and hanging out at their favourite Kaffeehaus. Even today, in an original Viennese Kaffeehaus you can still feel the grand Viennese tradition. In 2011, Viennese coffee culture was declared intangible cultural heritage by the UNESCO.

The Biedermeier period does not refer to the era as a whole, but to a particular mood and set of trends that grew out of the unique underpinnings of the time in Central Europe.

The term Biedermeier appeared first in literary circles in the form of a pseudonym, Gottlieb Biedermaier, used by the country doctor Adolf Kussmaul and lawyer Ludwig Eichrodt in poems that the duo had published in the Munich satirical weekly Fliegende Blätter in 1850.

To Learn More About Biedermeier, Refer the Books Below