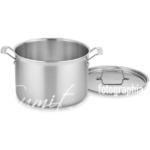 What is a boiling pot?

What is a Boiling Pot – Simply stating a boiling pot is a common pot used in Kitchens for boiling water or milk. Stainless steel pots are made an iron alloy that had other added elements, the most important being chromium. This hard, corrosion-resistant material is what makes stainless steel boiling pots such a gold standard for cooking, and in this case, boiling water.

A boiling pot is a tall, straight-sided cooking vessel with a flat base and comes in different sizes. It consists of lightweight material that is useful for heat retention. A boiling pot is covered and enables a certain amount of steam to leave during the heating process.