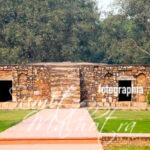 Bu Halima’s tomb garden, dating from the 16th century, stands abutting Isa Khan’s Tomb at the entrance zone of the Humayun’s Tomb complex. The exact identity of Bu Halima is a mystery as not many details on her are available.  Even her cenotaph states “Bu Halima, of whom not much is known”.

The rectangular enclosure of Bu Halima’s Tomb, contains a green, well-trimmed garden with a broad, neat pathway leading you in and out of it and another path (perpendicular to the main one) taking you to the structure on one end which contains the tomb of Bu Halima.

Bu Halima’s tomb is unusual. It is without a dome and her cenotaph lies exposed to air and Sun. Each of the four sides of the tomb has two entrances carved out in them.

Cenotaph of Bu Halima at the centre of an octagonal platform at the top of tomb.

Today, the main entrance to Humayun’s tomb is through Bu Halima’s garden that is simple and well-kept after restoration.

It is believed Bu Halima had an important place in Humayun’s harem. She was a part of Babur’s (Humayun’s father) entourage to India. It is also said that she was a Mughal noble woman and Humayun’s wet nurse.

Hence, evidently that she must have held a very important position to have a garden named after her and to have her tomb placed barely 100 meters away from the Emperor Humayun’s.

Places to Stay Near Bu Halima