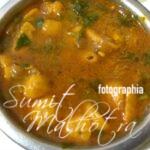 According to the inscriptions of the Chandela dynasty, this name derived from Jeja, the nickname of their ruler Jayashakti. However, other stories with respect to the name exist as well.

However, from historical standpoint Bundelkhand is spread over about 69,000 sq. km. of land in seven districts of Uttar Pradesh (Chitrakut, Banda, Jhansi, Jalaun, Hamirpur, Mahoba and Lalitpur) and six districts of Madhya Pradesh (Chhatarpur, Tikamgarh, Damoh, Sagar, Datia and Panna).

How did Bundelkhand Cuisine Evolve?

The land of Bundelkhand carries a magisterial chronicle including heritage, art & crafts, handloom, culture or cuisines. The Bundelkhandi cuisine claims its roots back to the Jain cuisine.

The delicious food that forms a part of Bundelkhand cuisine reflects the rich culture that is pursued by the people of this region even today.

Bundelkhandi cuisine has a dominant usage of wheat, rice (both small and big grain), Sorghum, millet and gram/ split gram.

Usage of milk solids or Khoya, gram flour or besan and wheat flour or aata is common for sweets with mewa or dried fruits and chironji as a garnish.

Besan Ke Aaloo: A dish that is like dried Rajasthani gatte. Besan ke aloo is made with gram flour (besan) chunks cooked in boiling water then sautéed using spices and condiments.

Bhate ka Bharta – Bhate ka Bharta is roasted aubergine mash finished with onions, tomatoes, pounded spices on a ‘Sil-Batta’ (the traditional grinder). It is a spicier version of  baingan-ka-bharta.

Ras Ki Kheer – Raas ki kheer is prepared by mixing the extracts of the local mahua flower with milk and millet. No sugar is added to this dish as it has got a sweetness of its own.

Meeda – Meeda is made from the tiny pieces of gram flour fried in oil and cooked in a thin tomato based gravy with spices.

Maheri – Maheri is a slow cooked broken wheat with buttermilk that resembles a bit like khichdi. It is light yet filling.

Adraini Luchai – Adraini is a deep fried flat bread prepared from specific proportions of wheat flour and gram flour and certain spices. Its a cross between a poori & cheela.

Nighauna – A gravy dish made with sautéed green gram (hara chana) paste with spices and condiments.

Lapsi – A sweet dish made with water chestnut flour and jaggery / sugar.

Poori Ke Laddu – Poori ke Laddoo is a dry dessert made with poori made with wheat & gram flours and jaggery or sugar.

Erse – Else is a deep fried sweet flat bread made from wheat flour and jaggery.

Aanwariya – It is also call it amla curry for which first, dried gooseberry buds are roasted in ghee or oil and ground on the cob. Then, you dissolve gram flour in water and put this powder of gooseberries in it to cook. Common spices like red chilli, cumin, onion and garlic are ground and added after frying in ghee.

Kodu Til Ka Bhaat – This is a local dish, in which rice is cooked with black sesame seeds. The two types of rice widely used in this region are kodu and kudki.

Bundeli Gosht – Historically, It is was hunted meat cooked with freshly pounded spices. This is a speciality of Bundeli royal kitchens for which mutton is cooked with boiled chickpeas and spices. Like most dishes from this region, this tastes best when cooked in a clay pot.

Kadaknath Murgha – The Kadaknath is an Indian breed of chicken local to the Madhya Pradesh area, where it is known as ‘Kali Masi’ as the meat is black in colour.

Keeme Ki Tikki – Keeme ki Tikki is made with grounded minced lamb and gram lentils cakes that are shallow fried and served with a gooseberry chutney.

To buy a book on Bundelkhand Cuisine, please visit the appropriate link below.