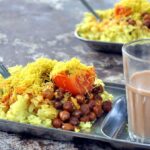 Chhattisgarh is a landlocked and heavily forested state located in the region of Central India. Formerly part of Madhya Pradesh it was granted statehood on 1 November 2000. Its capital city is Raipur.

Chhattisgarh is endowed with a rich cultural heritage and attractive natural diversity.

The State of Chhattisgarh is known as the rice bowl of India and has a rich tradition of food culture.

Being a state which produces staple food in abundance, a great part of the food culture of Chhattisgarh consists of the staple crops such as rice, wheat, bajra, jawar.

Other than these lentils like urad dal, chicken, mutton & leafy vegetables are majorly consumed in the state. Many sweet dishes are made of rice too.

The state largely maintains its ethnic food culture as most of its population continues to live within rural and tribal areas.

The state has nearly 44% of forest cover which serves as a decent source of food. People here prefer a vegetarian diet, and over 70 varieties of leaves, 25 varieties of tubers and roots are used here as vegetables.

The locals of this place are very fond of protein-rich food. The visitors are often enticed with the variety of lentils served to them.

The locals are also fond of snacks and every evening a variety of snack elements are presented. The sweet delectables are in a wide number of range.

The food of the state is highly inspired from its neighboring states. Hence, a great meal of food of Chhattisgarh promises a great taste and delicious inspirations from its neighbours.

Some more of these dishes include Dubki Kadi, Dal Pithi, Kujhiya, etc.

To learn more about Chhattisgarhi Cuisine, you can buy The Complete Chhattisgarh Cookbook: Where Indian Cuisine Begins