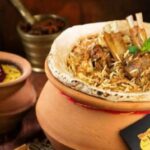 What is Dum pukht?

Dum pukht (Persian: دم‌پخت), larhmeen, or slow oven cooking is a cooking technique associated with the Northern Indian subcontinent in which meat and vegetables are cooked over a low flame, generally in dough-sealed containers with few spices.

Dum cooking entered India by way of Persia some 400 years ago, brought into the country by Muslim settlers. This culinary style allows for meat, coated with fresh spices and herbs, to slow cook in its own juices, retaining moisture and retaining its succulent flavour and nutrients.

When did Dum pukht originate?

Traditions assign its origin in pre-partition India to the reign of Nawab Asaf-ud-Daulah (1748–97). The technique is now commonly used in other cuisines such as Pakistani and North Indian.

Legend has it that when Nawab Asaf-ud-daulah found his kingdom in the grip of famine, he initiated a food-for-work program, employing thousands in the construction of the Bada Imambara shrine.

Large cauldrons were filled with rice, meat, vegetables, and spices and sealed to make a simple one-dish meal that was available to workers day and night. One day the Nawab caught a whiff of the aromas emanating from the cauldron and his Rakabdar or shahi cook was ordered to serve the dish ffrom the royal kitchens.

Today, dum cuisine in India can be traced from the royal kitchens of Awadh to other regions across India, including the courts of Kashmir, Rampur and Kolkata, among others.

What is the process of Dum pukht cooking?

Dum pukht means ‘cooking on slow fire’. The cooking process uses a round, heavy-bottomed pot, preferably a handi (clay pot), in which food is sealed with dough  and cooked over a slow fire.

Covering the handi with cooking dough allows the food to breathe in its own aromas and seals in all the flavours.

The two main aspects to this style of cooking are bhunao and dum, or ‘roasting’ and ‘maturing’ of a prepared dish. In this cuisine, herbs and spices are important.

The process of slow roasting (bhunao) gently allows each to release their maximum flavour.

The sealing of the lid of the handi with dough achieves maturing (dum). Cooking slowly in its juices, the food retains its natural aromas.

According to nutritionists, slow cooking is a low fat, healthier method of cooking, which requires minimum amount of effort. One can add all the ingredients at the same time and doesn’t need to add any oil as long as there is enough moisture.

Slow heat not only enhances the flavours but also increases the bioavailability of nutrients in plant foods.

Slow cooked meat with the bone provides our body with a rich contribution of collagen, gelatine and minerals like calcium, potassium, iron, phosphate & magnesium.

Which are the famous dum pukht dishes?

Dum Biryani, the one-pot dish of aromatic spices and delightful flavours, is perhaps the most famed of the dum pukht dishes. This style of cooking, traditionally known as dum pukht, is of course not just restricted to biryanis, but various other preparations such as korma, nihari, haleem, raan, other meat curries and also dal.

Recipes from the Dum pukht Cuisine