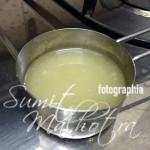 Ghee is a class of clarified butter that originated in the Indus valley. It is commonly used in cuisine of the Indian subcontinent, Middle Eastern cuisine, traditional medicine, and religious rituals.

How can I make ghee at home?

Ghee is typically prepared by simmering butter, which is churned from cream (traditionally made by churning the topmost layer of dahi, which is also called Bilona method), skimming any impurities from the surface, then pouring and retaining the clear liquid fat while discarding the solid residue that has settled to the bottom.

To make ghee at home with butter, simply place the butter in a saucepan over the stove and warm it up.

Once the butter melts completely, let it simmer. As the butter simmers, it’ll start foaming and splutter.

Continue cooking the ghee on low heat for 20-25 minutes, stirring occasionally to make sure the milk solids don’t burn at the bottom. Strain and pour this homemade ghee in a container like a mason jar and use as you like.

What are the uses of ghee?

What is ghee called in English?

How is ghee different from clarified butter?

The process of creating clarified butter is complete once the water is evaporated and the fat (clarified butter) is separated from the milk solids. However, the production of ghee includes simmering the butter, which makes it nutty-tasting and aromatic.

Is ghee healthier than butter?

Though, ghee is made from butter it has a higher burning point, making it favourable for frying and sautéing. Unlike butter, ghee retains most of the nutrients because it is treated with low heat (usually less than 100°).

Where can I buy good quality cow ghee?