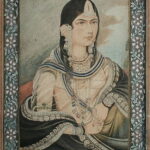 Hamida Banu Begum was a wife of the second Mughal emperor Humayun and the mother of his successor, the third Mughal emperor Akbar. She is also known by the title Maryam Makani, which was given to her by her son, Akbar.

Hamida Banu Begum was born c. 1527 to a family of Persian descent. Her father, Shaikh Ali Akbar Jami, a Shia, was a preceptor to Mughal prince Hindal Mirza, the youngest son of the first Mughal emperor, Babur.

She became Humayun’s junior wife, after Bega Begum (later known as Haji Begum, after Hajj), who was his first wife and chief consort. The marriage was “politically beneficial” to Humayun, as he got help from the rival Shia groups during times of war.

She was buried at Humayun’s Tomb after her death on 29 August 1604 in Agra, just a year before the death of her son Akbar and almost half a century after death of her husband, Humayun.

She was given the title, Maryam-makānī, dwelling with Mary, posthumously, as she was considered, ‘epitome of innocence’ by Akbar.

Places to Stay near Humayun’s Tomb