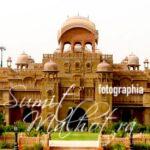 Built between 1898 and 1902, Laxmi Niwas Palace was commissioned by Maharajah Sir Ganga Singh to serve as his royal residence. It is constructed in an Indo-Saracenic style that was popular in 19th-century India and named after Goddess Laxmi, the Hindu Goddess of wealth, prosperity, and beauty.

Today! Laxmi Niwas Palace is sophisticated hotel set in the same palace. It is 1.5 km from the 16th-century Junagarh Fort and around 3 km from the Prachina Museum. It’s 4 km from Lalgarh Junction train station.

The hotel offers a coffee shop positioned in the former study room of the palace which remains open round the clock.

There are 2 upscale restaurants, an outdoor pool, a spa and an ornate billiards room. Other amenities include tennis courts and a terrace, plus a business centre and a bookstore. A breakfast buffet and parking are available.

Laxmi Niwas Palace, is an epitome of luxury and extravaganza. It charms the guests with its majestic and regal architecture.

What are the facilities at Hotel Laxmi Niwas Palace?