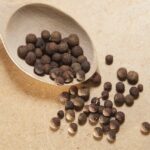 Jamaican Pepper – Read all about Jamaican Pepper in this section. Find and try some popular recipes too. I will be very happy and look forward to receiving your comments on these.

What is Jamaican Pepper? Jamaican Pepper is an alternate name for Allspice. The pimento tree is indigenous to the Caribbean Islands. It was found growing in Jamaica by early Spanish explorers who were quite impressed with the taste and aroma of the berries and the leaves. Pimento trees were later discovered in Cuba and were presumed to have been taken there by migratory birds which had eaten the berries. The name Pimento originated from the Spanish word “pimienta” (pepper or peppercorn). To most English speaking people the tree is called “pimento” and the berries “allspice”. The name allspice originated from the popular notion that the pimento berry contains the characteristic flavour and aroma of cloves, nutmeg, cinnamon and pepper, all combined in one spice.

Must Read: Health Benefits of Jamaican Pepper Or Allspice

Find out and read through a list of not to be missed Jamaican Pepper articles and recipes in this section for you to make and enjoy with your family and friends.

Do join the conversation, just drop in a few lines after reading the article or recipe with your experience. I will really love to hear from you.