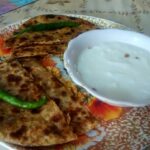 What is Jharkhandi Cuisine?

A rich part of North Indian cuisine, Jharkhandi cuisine encompasses the cuisine of the Indian state of Jharkhand. Staple food of Jharkhand are rice, dal, vegetable and tubers.

Common meals often consist of vegetables that are cooked in various ways, such as curried, fried, roasted and boiled.

Traditional dishes of Jharkhand may not be available at restaurants. However, on a visit to a local village, one can get a chance to taste such exotic foods.

Though, some commonly eaten daily dishes may be mild with a low oil and spice content, pickles and festive dishes may not have the same characteristics.

Jharkhand is usually known for some main dishes, but also some of the major dishes as in other neighbouring states.

The food is not very different from its neighboring state of Bihar. Jharkhandi People normally prefer rice, vegetables and pickles for their household meals.

To Learn More About Jharkhand Watercress, Refer to the Links Below