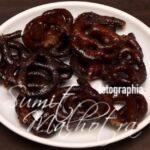 Where is Mahakoshal or Mahakaushal?

Mahakoshal is a region of central India. It comprises of the districts of Jabalpur, Balaghat, Sivni, Katni, Dindori, and Mandla. Mahakoshal lies in the upper or eastern reaches of the Narmada River valley in the Indian state of Madhya Pradesh. Jabalpur is the largest city in the region. Nimar region lies to the west, in the lower reaches of the Narmada valley.

How did Mahakaushal or Mahakoshal or Cuisine Evolve?

The evolution of the food culture of Madhya Pradesh is indelibly linked with its history, its royalty, its religious alignments, its unique traditions of the tribes and its geographical and climatic conditioning.

Its food has grown into an eclectic mix of myriad flavours, borrowed dextrously from the best of different cultural tastes.

Due to Mughal rule for a long time, the cuisine of this part of Madhya Pradesh is greatly enriched from the flavours of the Mughal cuisine and many dishes as a part of this cuisine have attributes of the Mughal rule including biryani.

The delicious food that forms a part of Mahakoshal cuisine reflects the rich culture that is pursued by the people of this region even today.

Palak Puri – Palak Puri are made from a mixture of wheat dough and a paste of spinach leaves and then deep fried. These are best served with raita, aloo-sabzi and pickle.

Malpua – Malpua is India’s very own pancake, prepared by deep frying batter in ghee. It is then dipped in sugar syrup to add sweetness. Malpua, garnished with dried fruits and saffron, is a must-have treat for all. Pair it with rabdi to make it more delicious.

Mawa Baati – Mawa Baati looks more like a large-size gulab jamun, it is crisp and has just the right texture and sweetness. The mawa dough is mixed with dried fruits and then rolled into balls, which are then deep fried and further soaked in sugar syrup.

Dal Baati – Dal Baati is a main dish of Mahakoshal region. In rural areas, this dish is prepared every third or fourth day, and in the urban areas, it is usually prepared on Sundays. Pure Desi ghee is used in abundance for this dish.

Khoya Jalebi – This dark coloured jalebi is a Mahakoshal favourite. It is made with a batter of Khoya or milk solids, milk with little maida added for binding. The dark colour comes because of the Mawa / Khoya used.

Pilaf with Peas and Carrots – This is made with fluffy basmati rice and tossed with peas, carrots, warm spices, and aromatics is a delicious way to take plain ol’ rice to the next level.

Bhutte Ka Kees – Bhutta (singular) or Bhutte (plural) means corn in Hindi. Kees means grated. So the name of the dish Bhutte ka kees literally translates into grated corn dish that is popular as a snack.

Dal Kachori – These kachori are made with ground dal that is sautéed with spices and filled into a shell made with maida and baking powder. These are then deep-fried.