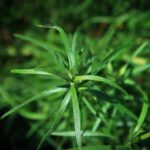 What is Mugwort – Mugwort is an alternate common English name for Tarragon. Tarragon (Artemisia dracunculus) is one of the great culinary herbs. It is a kitchen staple in French cuisine and fondly called the “King of Herbs”.

Its Latin name, dracunculus, means “Mugwort” and is derived from the medieval belief that the shape of a plant reflected its uses (the Doctrine of Signatures).