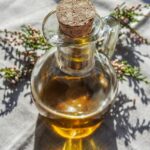 What is Mustard Oil?

Mustard Oil is extracted from mustard seeds. It is rich in monounsaturated fatty acids, which appears to reduce the likelihood of developing cardiovascular disease.

Mustard oil can mean either the pressed oil used for cooking, or a pungent essential oil also known as volatile oil of mustard.

The essential oil results from grinding mustard seed, mixing the grounds with water, and extracting the resulting volatile oil by distillation. It can also be produced by dry distillation of the seed.

Cold pressed mustard oil is used as cooking oil in a lot of cultures, but sale is restricted in some countries, like USA, due to high levels of erucic acid.

How is Mustard Oil Made?

Dry mustard seeds are fed to a table Ghani or oil extractor wherein about 90% of the oil is extracted. Further processing in expeller results in additional extraction of oil.

Kachchi ghani refers to cold press extraction process for taking out oil from seeds. Traditionally, oil from seeds were extracted in kohlus (a wooden cold press used with the help of a cow or a bull).

In this process, seeds are crushed at low temperature so natural properties, antioxidants and essential oils are retained in the oil.

In this method, the oil is made by pressing of the seeds or by the process of grinding, after which it is mixed with water and then distilled. The black mustard yields a lighter colored and stronger tasting oil, while the white variety produces a yellowish colored, pungent oil.

The oil is refined by neutralisation with alkali &/or physical refining / or miscella refining and by using permitted food grade solvents followed by bleaching with absorbent earth & or activated carbon and deodorisation with steam.

What are the uses of mustard oil?

Mustard oil can be used in any number of ways: frying, sautéing, or included in the mixture for an aachar.

If you want its pungent kick to be particularly powerful, you’ll want to heat the oil up, which increases the volatility of its potent aroma molecules.

You can also use mustard oil just like any other flavourful oil, like olive or sesame oil.

You can drizzle it over salads or even use it as a finishing oil for many dishes, whether they comprise of vegetables, fish, poultry, or steak – essentially wherever you need a wasabi-like edge.

Why is mustard oil illegal in United States of America?

Mustard oil has high levels of erucic acid. Erucic acid may have toxic effects on the heart at high doses.

An association between the consumption of dietary erucic acid and increased myocardial lipidosis, or heart disease, has not been established for humans, although given what is known about erucic acid, it is reasonable to expect that humans would be susceptible to this.

Mustard oil is not allowed to be imported or sold in the U.S. for use in cooking, except for those products with exceptionally low erucic acid content.

Yandilla Mustard Seed Oil is internationally recognised as the world‘s first cold-pressed, low erucic acid mustard oil and is available in the USA (link below).