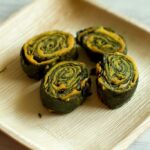 Patrode | what are patrode?

Patrode are a Himachali seasonal specialty made during the end of the monsoon season when the arbi leaves can be found in abundance.

It is also prepared as one of the delicacies cooked to mark the celebrations of Sankranti that falls each year on September 16.

Patrode are one of the famous tea-time snacks in the hills of Himachal Pradesh, which you can also eat with roti at dinner. So it is an any time meal.

It is said, that the word ‘patrode’ is derived from two words – ‘patra’ and ‘vade’ where patra means leaf and vade means dumpling.

Originally, Patrodo/Patra/Patrodu is considered to be an a vegetarian dish from the Western coast (Tulunad) in India. It is also adapted in the Himachal Pradesh Cuisine and that of Gujarat, UP & Bihar and some other names in other parts of India.

What are Patrode made with?

How are Patrode made?

Patrode are made by using besan (gram flour) and Colocasia leaves. The leaves are wrapped around the mixture of besan and spices, made into tiny cylinders or rolls, steamed and cut into slices which can then be deep or shallow fried.

How is Patrode used?

Patrode are a homemade snack, which could be consumed any time of the day with any meal of the day accompanied with a glass of buttermilk or a bowl of curd due to the fiery, spicy and hot temperament of the leaves.