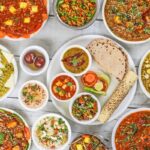 North Indian Cuisine is known as the king of cuisines in India. North Indians and their delicacies are undividable.

North Indians are known as serious food lovers and cooking for this clan is no less than a ritual when compared to other parts of the country.

The taste and flavours of the North Indian Dishes is influenced by the Mughal dynasty that ruled India for three centuries.

Apart from the architecture, saffron and rich gravies made of pureed nuts and cream are all in the recipes inherited from them. Read more about North Indian cuisine.

To Learn More About North Indian Cuisine, Click Below for the Books