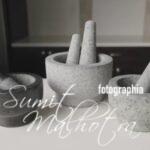 Okhli, okhal or kharal is a strong bowl in which things are broken and crushed with a mace-like stick called a moosal or musal. This moosal is the heavy pestle used for crushing. These together are used in a pair called Okhal-Moosal.

What is okhal-moosal used for?

In many cultures, it is also considered a symbol of medicine or health due to its use to make medicines.

You can even prepare the pastes of garlic, ginger and other spices with this mortar and pestle.

It can also be used to make salsas and guacamole, as well as crush dried chiles and cinnamon sticks.

You place in the ingredients into the okhal and pound it with moosal till it is pulverised. For pulverising & grinding, the pestle is used in a circular motion.

This brings out the actual flavours of the ingredient. This method has the added advantage of crushing the food with low energy, just enough to bring out its essence without heating it up and losing flavour.

Which Okhal-Moosal material is the best?

For general use, the best option would be to get one made from a solid stone material like granite or marble or even volcanic rock. These stone mortars and pestles will use their heavy weight to break down the ingredients and they will also be able to withstand years of pounding and grinding without needing to ever replace it.

Where do I buy an Okhal-Moosal from?