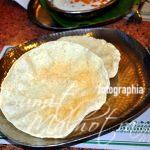 Papad | what is a papad?

What is a papad?

A Papad is a thin Indian wafer, sometimes described as a cracker or flatbread. It is usually made from dried bean, lentils or flour made with other ingredients. It is fried or roasted to eat as a tasty and crispy side dish for lunch and dinner.

Also known as a papadam or appalam, a papad is an Indian deep fried dough of black gram bean flour, which is either fried or cooked on dry heat (flipped over an open flame) until crunchy.

While some folks prefer to fry their papads, others dry roast them as explained above, with many households preferring just to microwave them.

Papad it is one of many essential food items in the South Asian household, helping to spice up a meal.

Why is it called a papad?

Meaning a flattened disc, the word papad has perhaps been derived from the word ‘parpata’ in Sanskrit.

Papad is familiar as ‘appalam’ in Tamil Nadu, ‘pappadam’ in Kerala, ‘appadam’ in Andhra Pradesh and Telangana, ‘happala’ in Karnataka and ‘papad’ in Punjab and Gujarat.

Is papad good for health?

Papad is rich in protein and fibre. They are free from gluten and thus can be had by people with gluten intolerance.

They produces digestive enzymes by easing the digestion process. This helps in tackling other gut problems by promoting good bacteria in the gut. Since it is high in protein, it can be enjoyed by people across age groups.

However, an uncontrolled serving of papad can increase your calorie intake and it is better to consume it roasted than deep fried.

What is papad made of?

Papad is made from ingredients such as urad dal, rice, chana, and moong. It is spiced with flavourful ingredients and spices such as chilli, cumin, garlic etc. You can also find papad made from sweet potato, beetroot, potato, and onion.

Papad are also made with flours made with sweet potato, tapioca, beetroot, potato, and onion in some regions of India.

Papad are a uniquely Indian product, made and consumed across nearly every region of the country, and appreciated abroad as an excellent Indian innovation.

How is papad made?

All the papad ingredients are ground together and the dough is rolled into flat circular discs which are then is left out to dry in the sun. The sun-dried end product is then either fried in oil or dry roasted (even microwaved) before eating.

What is papad served with?

Papad are usually served as an accompaniment to rice and dal. It can also be eaten as a starter or a light snack. You can add a topping of chopped vegetables, spices, and chutneys to make a simple and quick starter called masala papad.

You can also use them to make flavourful sabzi and curries and bring about variation in your daily meals as done in Rajasthan, Gujarat, Maharashtra and Madhya Pradesh.

They use papad in their crushed form as a stuffing and garnishing dishes like a parantha and tikki.

The serving and eating variations are limitless so, Papad can sometimes be eaten plain, or with chutneys or dips, or even topped with vegetables and cheese.

Lijjat Papad is the brain child of seven Gujarati women from Mumbai who were seeking to start a business venture to create a sustainable livelihood using the only skill they had – cooking. Founded in 1959, within three months the Lijjat team expanded to 25 women who produced papads by hand.