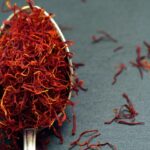 All about saffron | know your spice kesar (crocus sativus l. )

Saffron is a spice derived from the flower of Crocus sativus, commonly known as the “saffron crocus”.

The vivid crimson stigma and styles, called threads, are collected and dried for use mainly as a seasoning and colouring agent in food. Saffron has long been the world’s costliest spice by weight.

What is Saffron used for?

Saffron has a long history of use in traditional medicine. Saffron has also been used as a fabric dye, particularly in China and India, and in perfumery. It is used for religious purposes in India.

Confectioneries and liquors also often include saffron. Saffron is used in dishes ranging from the jewelled rice and khoresh of Iran, the Milanese risotto of Italy, the paella of Spain, the bouillabaisse of France, to the biryani with various meat accompaniments in South Asia.

One of the most esteemed use for saffron is in the preparation of the Golden Ham, a precious dry-cured ham made with saffron from San Gimignano.

Why is Saffron so Expensive?

Saffron is so expensive because it is an extremely labor-intensive crop. The spice we think of when we hear “saffron” is actually the stigma. It is only a small part of the Crocus sativus plant itself.

Since such a small part of the flower is used, it takes 75,000 saffron flowers to make one pound of saffron spice. The small amount of saffron spice per plant, along with the fact that harvesting must be done manually, leads to saffron’s being majorly expensive.

Where to buy saffron from?