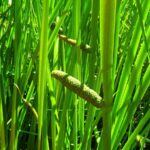 Also known as Calamus it has a spicy fragrance to it with the leaves having lemony overtones. In medieval times the dried stalks were laid on floors to act as a scented mat to walk on. It’s a forager’s treat, as you can eat the raw, partially grown flower stems of calamus. In Spring, the young stalks, with half-grown leaves packed inside them, are sweet and tasty raw in a salad.

Calamus is used by foragers as a spice, to replace cinnamon, ginger or nutmeg. In the Ayurvedic medicine it was used to keep the voice going when reciting the Upanishads. Sweet flag is a native to most Northern latitude countries around the world, widely dispersed around the USA. It is found wild or cultivated in India and Sri Lanka up to 1800 meters.