All About Sweet Flag | Know Your Spice Gorabach (Acorus calamus) 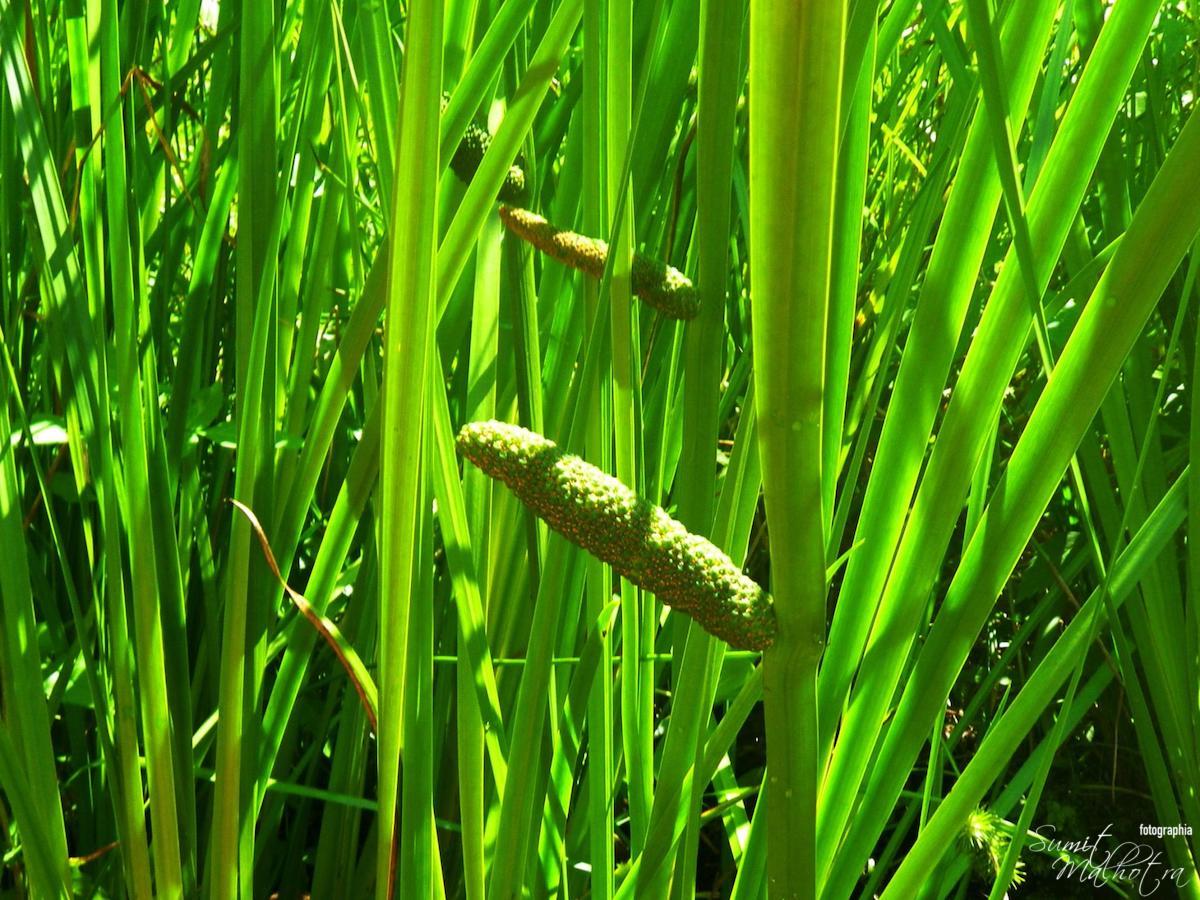 All About Sweet Flag | Know Your Spice Gorabach (Acorus calamus)

It is also known as Calamus, Sweet Rush or Sweet Cinnamon

In medieval times the dried stalks were laid on floors to act as a scented mat to walk on.

It’s a forager’s treat, as you can eat the raw, partially grown flower stems of calamus. In Spring, the young stalks, with half-grown leaves packed inside them, are sweet and tasty raw in a salad.

The roots are edible, with a sort of gingery, spicy, bitter, sweetness to them.

Calamus is used by foragers as a spice, to replace cinnamon, ginger or nutmeg. In the Ayurvedic medicine it was used to keep the voice going when reciting the Upanishads.

It is called vacha meaning literally ‘to speak” but also referring to the way it connects the heart to the voice, helping anxious people feel able to speak up about things on their mind.

What are the other names of Sweet Flag?

Gorabach or Calamus names in other languages are given below.

What exactly is Sweet Flag?

Get to know more about Gorabach (Acorus calamus) 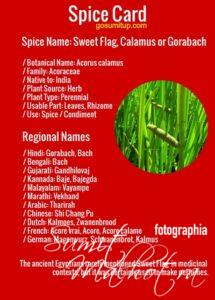 Sweet Flag is a perennial herb, semi aquatic, marshy plant with a creeping and much branched, aromatic rhizome.

Its botanical name is Acorus calamus and belongs to the Acoraceae.

The rhizome is cylindrical about 19-25 mm in diameter and 10 cm long. It is light brown outside, white and spongy inside.

Sweet flag is a native to most Northern latitude countries around the world, widely dispersed around the USA. It is found wild or cultivated in India and Sri Lanka up to 1800 meters.

What is the nutritional value of Sweet Flag?

Find out about the nutritional value of Gorabach (Acorus calamus)

What is the chemical composition of Sweet Flag?

Know and understand about chemical composition of Gorabach (Acorus calamus)

What is the history of Sweet Flag?

Know more about the origins & the story behind Gorabach (Acorus calamus)

One of the earliest records of sweet flag is the calamus of the Bible. It was first mentioned when God told Moses to make a holy oil to anoint the tabernacle, the ark of testimony, and other ritual paraphernalia (Exodus 30:23, 24, 34).

Calamus was also one of the plants said to grow in the gardens of Solomon (Solomon 4:14). Sweet flag was also used by the early Greeks and Romans.

Hippocrates (460‑ 377 B.C.) used the plant medicinally and in early herbals of the first century Dioscorides and Pliny referred to a plant called acoron, which appears to be sweet flag.

Theophrastus (371‑287 B.C.) mentioned calamus in his works, and Celsus reported its presence in Indian markets nearly two thousand years ago.

Aphrodisiac properties were attributed to the rhizome by the Roman and Arabic cultures for centuries.

The aroma is likened to ginger and used in India when ginger is not available. It is also chewed to freshen the breath.

On the Chinese New Year, Cantonese cleaned out their homes and placed the sword-shaped leaves near the door. Beneath them was placed a pair of red scrolls bearing an inscription, for example: (The sweet flag, like a sword, destroys a thousand evil influences.)

In olden times, sweet flag, or calamus, was recommended by Taoists as having the power to bestow immortality.

Native Americans of the Great Lakes region weave fragrant sweet flag baskets, and those of Penobscot, Maine, believed it had protective and healing powers.

Wisconsin and Minnesota Indians soak their nets in an infusion made of sweet flag and sarsaparilla, for catching white fish. It is said the net still smelled of the decoction after being in water for 12 hours.

The Egyptians used sweet flag for the legendary disease of scrofula, but it should be combined with supporting, more effective herbs for this chronic condition.

Originally, China and India were the motherlands of Calamus, or sweet flag, which was first taken to Russia in the 11th century when the Mongolians overcame the Russian territory.

Tartars (Mongolians) considered that sweet flag purified the water. When they planned on settling in a new territory, sweet flag was always planted near the watering place to ensure of pure drinking water for the horses.

What are the uses of Sweet Flag?

What is the the taste of Gorabach?

Calamus root has a pungent aroma, the flavour being initially sweet, similar to a mixture of cinnamon, nutmeg and ginger with a bitter aftertaste.

How Much Sweet Flag Should I Use?

What is the the recommended quantity of Gorabach for a day?

Calamus is used by foragers as a spice, to replace cinnamon, ginger or nutmeg, but a little goes a long way.

The dose varies from person to person. Some Native Americans would set the limit as – a root as long as your little finger.

In herbal medicine, the maximum dose that is generally recommended is 4g of the dried root (about 3/4 of a teaspoon), 30ml of a decoction and 4 ml of 1:5 tincture up to three times a day. 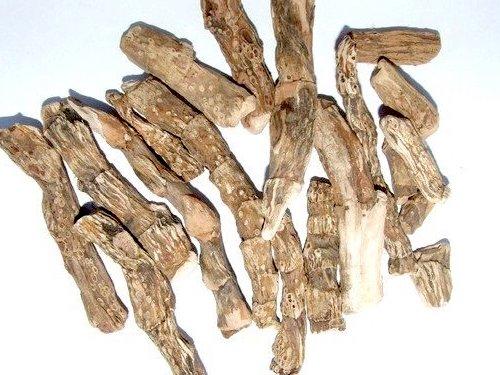 What are the ayurvedic properties of Sweet Flag?

What can I use Sweet Flag for?

Learn how to use Gorabach (Acorus calamus) in your food & beverages.

How do I prepare Sweet Flag for food?

Learn how to prepare Gorabach (Acorus calamus) in your food & beverages.

You can chew the root fresh or dried. You can also make an infusion by leaving the root in a jar of cold water overnight or adding hot water to half a teaspoon of powdered calamus.

How long does Sweet Flag last?

Learn about how long does Gorabach (Acorus calamus) last in storage.

They should be stored in a cool dry place, but not longer than one year. After this the roots has lost most of its active principle. The fragrance increases during the drying process.

How do I store Sweet Flag?

Learn about how to store Gorabach (Acorus calamus).

Sweet flag rhizomes are best stored sliced and dried. Store in a cool and dry place away from sunlight and moisture. Keep it in an airtight container after opening.

Is there a substitute for Sweet Flag?

The dried and powdered rhizome is rich in starch and has a spicy flavor and is used as a substitute for ginger, cinnamon and nutmeg and vice versa.

Where do I buy Sweet Flag from?

Where to Locate Gorabach (Acorus calamus) in the Grocery Store?

Sweet Flag root & powder should be readily available in most large grocery stores and specialty markets on the spice racks. You can also order it online via amazon.

What are the health benefits of Sweet Flag? 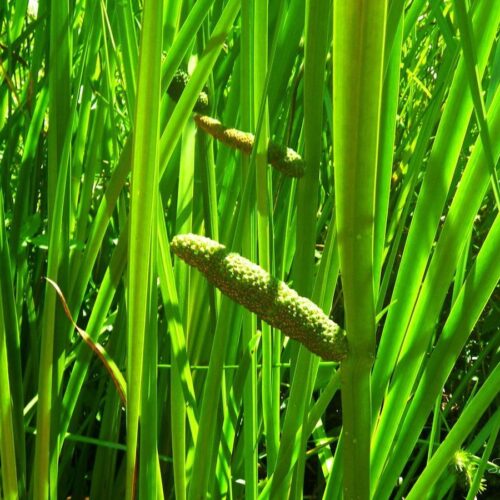 In medieval times the dried stalks were laid on floors to act as a scented mat to walk on.

It’s a forager’s treat, as you can eat the raw, partially grown flower stems of calamus. In Spring, the young stalks, with half-grown leaves packed inside them, are sweet and tasty raw in a salad.

Coronavirus Disease – I just found I am infected with CoVID-19

All About Tamarind | Know Your Spice Imli (Tamarindus indica L.)