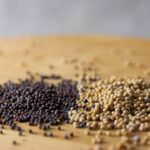 What is Antram – Antram is the Mizo name for Mustard Seeds.

Mustard or Antram (Brassica nigra) is known both as oilseed as well as spice. Internationally, however, it is more popular as a spice.

Antram is also called Spice of Nations because it is so universal.

Pungent and flavourful, mustard has remained an important condiment throughout the ages. It is available in whole seeds, as a powder, or “flour,” and, most popular, as a prepared paste.

Antram are the small round seeds of various mustard plants. The seeds are usually about 1 to 2 millimetres (0.039 to 0.079 in) in diameter and may be coloured from yellowish white to black.