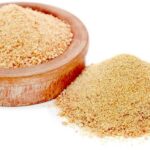 What is Asant – Asant is the German name for Asafoetida.

Asant or asafoetida is essentially a dried latex ((gum oleoresin) extracted from Asant, an plant in the Umbelliferae (Celery family). The resin exudes from the Ferula plants that grow wild in Afghanistan and Iran.

Read more – All About Asafoetida | Know Your Fine Spice Asant