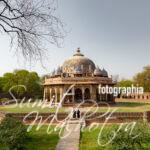 Located on the southwestern side of the Humayun’ tomb is Barber’s tomb (Nai-ka-Gumbad) which stands on a raised platform, reached by seven steps from the south. The building is square on plan and consists of a single compartment covered with a double-dome.

Literally meaning the Barber’s tomb, it is said that Mughal Emperor Humayun honoured his favourite barber with this beautiful edifice, located next to his very own magnificent mausoleum.

Nai Ka Gumbad happens to be the only structure standing inside the large square (Charbagh), which houses the magnificent Humayun’s Tomb at the very centre.

A board put up by the Archaeological Survey of India (ASI) reads “Folklore lore refers to the building as Barber’s Tomb. The red sand stone faced, tilted canopies, minarets and sandstone screens give the tomb its striking character. The tomb has within it the ornamental cenotaphs of one male and one female. The water channels around the tomb were added between 1905 and 1909.”

No one actually knows who are buried inside this picturesque tomb of red and grey sand stone. Popular myth is that the tomb is dedicated to Mughal emperor Humayun’s royal barber & was commissioned by emperor Akbar.