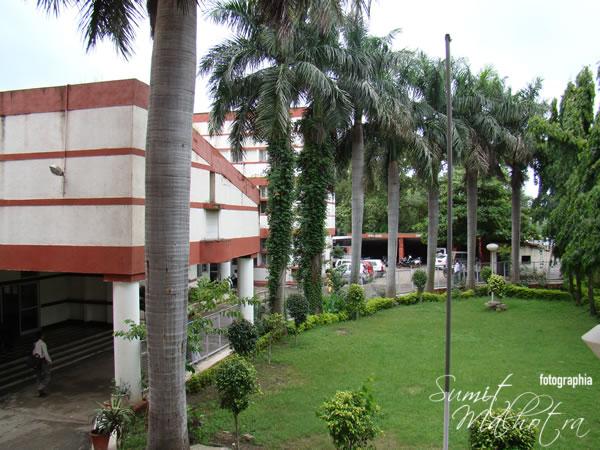 As the train chugged into the Habibganj station in Bhopal – the City of Lakes, our trio of Vijay Jassal, Arun Kumar Menon & I had a huge surge of nostalgia. We were revisiting Bhopal years after passing out of our alma mater, IHM Bhopal.

The feelings of homecoming and congregating with the old pals were quite overpowering – an initiative that was taken by Devdutt Abhyankar – a hotelier. Even stronger were the emotions of standing yet again with our Gurus. Gurus, who paved the way for a formal IHM Bhopal Alumni Network or BHAI. I offer my humble and profound respects to our Gurus.

The first look at the Habibganj railway station on outskirts of Bhopal itself was astounding. It had changed significantly over a period of time. It looked huge unlike the nineties when it had all of two platforms. And today it was bustling with heavy activity at 7.30 AM with trains coming in and going out rapidly.

As we alighted from the train heaving our rucksacks and bags on the shoulders, I couldn’t help noticing the August greenness that was resplendent around us. The very green Madhya Pradesh that I had also noticed standing by the door of the compartment of the train as well as it entered the subtropical belt.

It immediately reminded me of the old times I had spent in Bhopal while training to be a hotelier which I was (briefly in one of my corporate avatars) before turning an entrepreneur.

The City of Bhopal – High Points

From my perspective, the city of Bhopal has three high points – its lakes and the lush green surroundings that are virtually unknown to other Indian cities of note. Bhopal has an unmatched and abundant bounty of nature that is available to everyone who would want to savour it. The best part, there are no charges – Nature for free.

The third high point in Bhopal, of course, is the IHM Bhopal which is a nurturing ground for budding hoteliers of India. Nothing else in Bhopal matters to me more than these three. I was not only looking forward to meeting my amigos and teachers but I also wanted to walk the familiar streets of Bhopal. I had done all this some twenty years ago, sampling some of the fabulous street food that Bhopal has always been famous for.

Arun was already shifting and he didn’t make any secret of telling us about downing a hot cup of tea before doing anything else. And we still had to get out of the station, find transportation and then make our way to the Hotel Residency where we were all booked courtesy Dipak Ashok Limaye – a budding restaurateur from Mumbai.

Finally, we concurred to grab a cup of tea, some local Bhopali breakfast and then make our way to the hotel.

We exited from the platform and climbed into an auto-rickshaw stuffing our bags into the small rack at the back. How our three big bodies fitted into the demure, motorised three-wheeler is a secret not to be shared? The fitting part is that we managed, which is when Arun pointed out the “No Ragging” boldly displayed on a hoarding put up by an educational institution.

I think all three of us nodded our heads in total disagreement and despaired on today’s marketing strategies institutions have to employ to attract unassuming students.

All settled, the orders were issued out to the rickshaw driver to take us to the nearest breakfast joint which we found out from the driver was actually was right on the way to our hotel. While some of our memories about Bhopal still raged strong, some indeed had faded away. 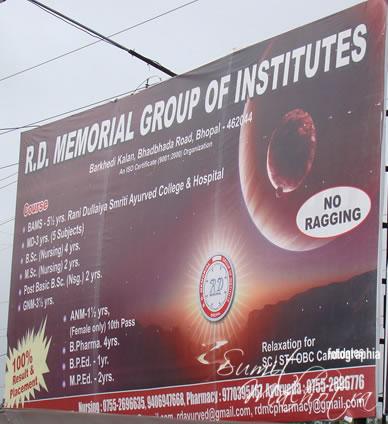 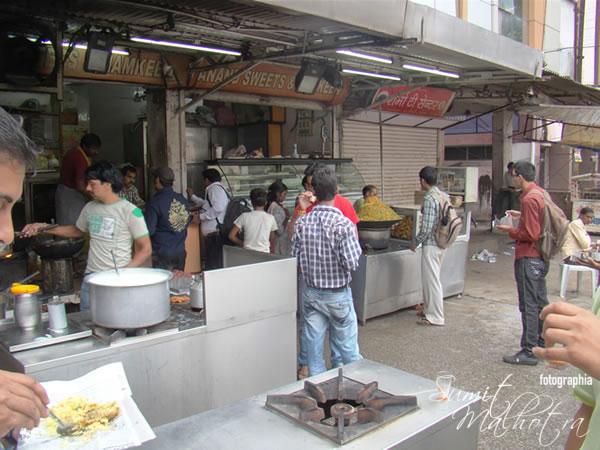 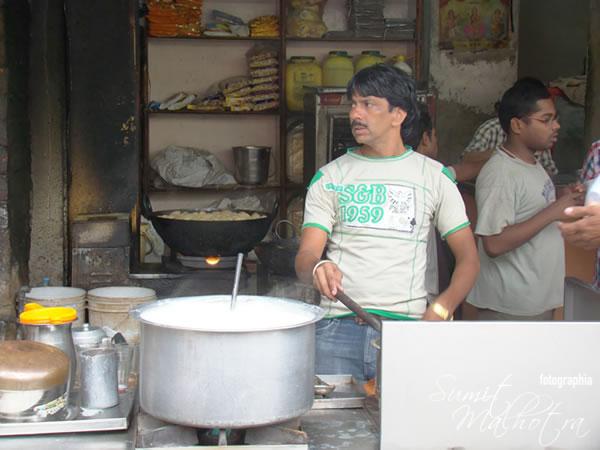 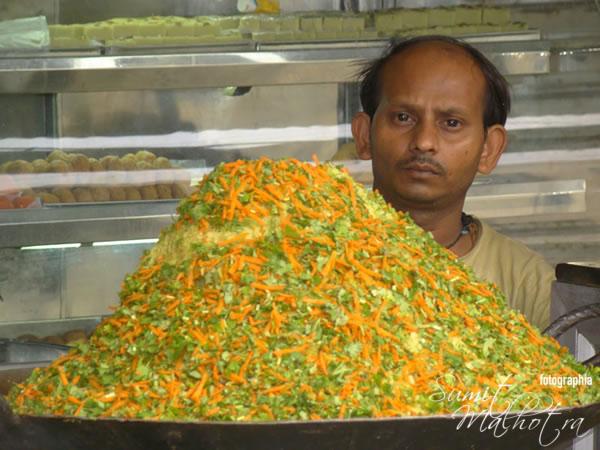 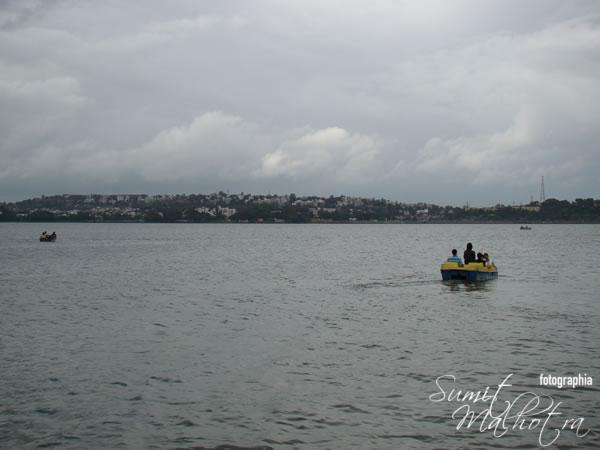 In flat five minutes of navigating through the potholed roads (rains do this all over India), we were parked outside Anand Sweets & Namkeen in Maharana Pratap Nagar – a joint that was not entirely unknown to us from history.

The urge to eat was so powerful that the auto-rickshaw was abandoned the moment we got there, everything about our baggage forgotten as well. The place was already teeming with people who were in various though definitive stages of breaking their fast and the queue for placing fresh orders was lining up rapidly.

I moved in quickly and picked up a bunch of tokens for Poha (Rs. 50 if I remember correctly), Samosas, Jalebi and Tea – which is the true Breakfast ala Bhopal. This breakfast surely has the capacity to punch enough kick in you to go through the entire day without feeling much hungry and that too breakfast for three at Rs. 50. The deal surely could not get better than this.

We were not disappointed at all, the tea was absolutely piping hot and amazing to taste. It caused an immediate rejuvenation warding off the fatigue caused by scant sleep whilst in the belly of the train. The secret to making the tea in Bhopal lies in using the milk that is constantly reducing on a flame.

We were hungry and that’s what had mattered then. As Vijay deposited the tokens and retrieved the Poha and Samosa helpings in cones made out of the previous day’s newspaper, we immediately attacked the scrumptious food with as if there would be no tomorrow.

The Samosas had been just taken off the kadhai and were fresh, hot, and crunchy. The liberal filling of potatoes, black pepper had given a fantastic flavour to them. Finished in a minute.

The Poha was attacked next and was really light, fluffy and infused with varied tastes of fried mustard seeds, turmeric, chilli powder, finely chopped onions, shavings of carrots and fresh coriander leaves.

It was absolutely awesome and filling and at no point made any of us feel lethargic. The closure was done traditionally with Jalebi, a perfect combination of a full breakfast, merging tastes of both – the savoury Poha and the sweet crisp Jalebi.

Take my opinion, when you are in Bhopal next, especially if you are close to Habibganj, definitely try the breakfast at Anand Sweets & Namkeen. Though I am sure that others Breakfast centres in Bhopal will have equally good stuff to offer, I am recommending Anand since I have been there more than once, I like it and it is close to the Habibganj railway station.

Rajasthani Cuisine – Cuisine from the Land of the Royals

Rajasthani Cuisine – Cuisine from the Land of...