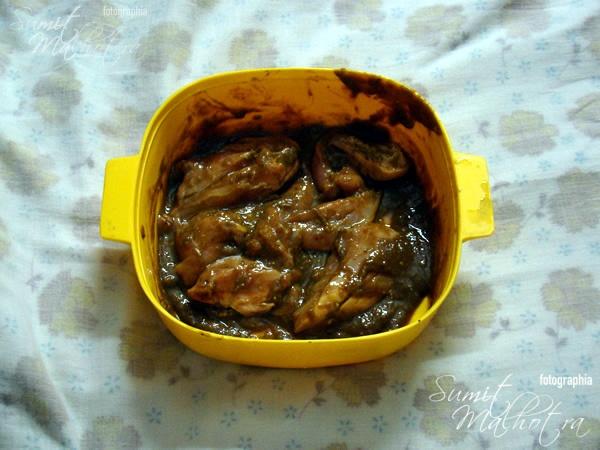 Gulgule Chutney Chicken – Leftover gulgula chutney lying in the refrigerator was the genesis of this Gulgule Chicken. I curiously thought of making chutney grilled chicken marinated in the same.

Since the green chutney was really spicy by itself, I decided to bring down the heat quotient in Gulgule Chutney Chicken by making some simple modifications. The net result follows.

Gulgula(e) is a Moong Daal Pakora(s) or fritter(s). These are an absolute favourite with North Indians and are sold in almost every nook and corner. Just as “Vada Pav” is to Maharasthra “Gulgula” are to Northern states.

Also known as Ram Ladoos, Gulgula has a very mild taste with a dominant flavour of asafoetida. They are served topped with grated radish & chaat masala. To top it all, a hot and spicy a green tangy chutney is drizzled on top. 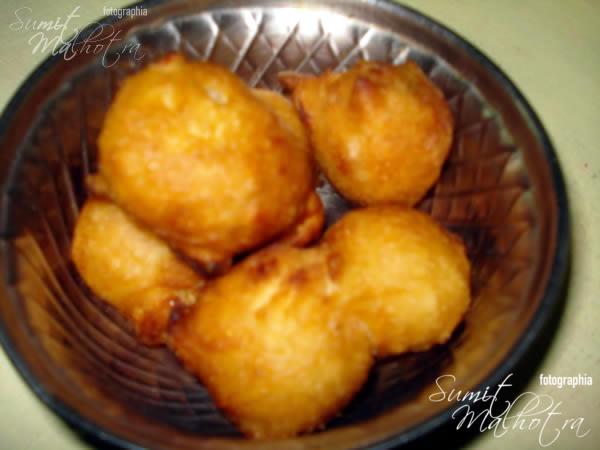 I don’t know what the usual take on street food is. Though I am quite comfortable with it as long as the place looks tidy & the food looks inviting. Street food at times offers such a diverse variety of flavours that tantalize even a highly discerning palate.

The momo stands, street-side burger joints, instant egg rolls have made their appearance in the markets of urbane Indian cities quite recently.

However, the usual snacky suspects in Northern India always have remained items like the samosas, pakoras, jalebis, bhajiya and gulgula or Ram Ladoo.

I remember the ubiquitous “Gulgulewala Bhaiya” distinctively though I don’t remember his name. He used to visit our lane in Old Rajinder Nagar every weekend and waited for us kids to pop out of our houses at his call.

And rushed out we did, to grab our plates of gulgula. The small, round, yummy, deep fried moong daal ka pakoras. It was our usual Saturday and Sunday snacking routine.

Gulgulewalas, unless they have their own stationary thelas, are mobile and usually carry a small tokri (basket) on their heads which is loaded with gulgule, radish, masala and chutney. The tokri also has a stove with a small tawa (griddle) on which these gulgule stay warm.

To rest the tokri, they carry a typical tripod stand made up of thin bamboo sticks on their backs. They are still seen, though rarely in Gurgaon, making their way through the narrow lanes of Delhi.

Hauled to a stop by a customer, they simply set up the shop in a jiffy and in no time assemble the plate with about 10 pieces of gulgule neatly covered with grated radish and topped up with spicy green chutney.

The better-off Gulgulewalas have their own thelas (carts) where the actual gulgule frying process happens. They also often act as wholesalers for the mobile Gulgulewalas.

They are normally found stationed next to bus stops, outside museums, cinema halls, in lanes outside bustling offices and now around a few Delhi Metro Stations too.

Gulgule have always made a popular anytime snack in North India and are light, fluffy and crunchy in their texture. The spicy green chutney and grated radish one eats them with really spikes up the senses.

Even if one is hammered by the chillies in the green chutney, one still can’t have enough and wants more.

I recently picked up a couple of plates of gulgule from a Gulgulewala Bhaiya who stands under the MG Road Metro Station just outside the Metropolitan Mall.

While the gulgula vanished without a trace as soon as they were served at home, I was still left with a sizeable helping of the spicy green chutney. I didn’t have the heart to throw the chutney away so saved it to be put to good use later.

Sunday last I got around to do some solo cooking. The item on the focus was Thai Chicken in Red Curry recipe.

I wanted to use just about 300 gm of chicken for the spicy Thai curry out of the 500 gm of chicken that was available and was left contemplating what to do with the remaining 200gm.

I realised I had the leftover gulgula chutney lying in the refrigerator and curiously thought of making grilled chicken marinated in the same. Since the green chutney was really spicy by itself, I decided to bring down the chilly quotient.

To do this I added one part of tomato sauce to two parts of the spicy green chutney, two tablespoons of vegetable oil and corrected the salt to my taste. The resultant was a marinade with a really piquant flavour, really close what we call “Chatpata”.

Chicken in the Gulgule Chutney Marinade

Next, I sliced the chicken into strips, nicely smeared the marinade into the strips and froze them for about an hour.

After an hour, I removed the chicken strips from the freezer, rubbed the marinade all over once again, covered it with cling film and refrigerated it for another 24 hours.

I removed the marinated chicken the next day and grilled the strips in a microwave oven on a high rack for about nine (9) minutes on both sides. The result was astounding as the chicken strips came out nice, succulent and really lip-smackingly “Chatpata”.

A Tip: If you, curiously, intend to try this, please use the grill mode only on your microwave or simply shallow fry in a flat pan till done. And do find some gulgule to munch on. I tell you they are just divine.

How to make Gulgule Chutney Chicken?

Leftover gulgula chutney lying in the refrigerator was the genesis of this dish. I curiously thought of making grilled chicken marinated in the same. Since the green chutney was really spicy by itself, I decided to bring down the heat quotient in Gulgule Chutney Chicken. 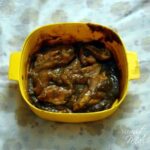 Gulgule Chutney Chicken – Leftover gulgule chutney lying in the refrigerator was the genesis of this Gulgule Chicken. I curiously thought of making chutney grilled chicken marinated in the same.

Since the green chutney was really spicy by itself, I decided to bring down the heat quotient in Gulgule Chutney Chicken by making some simple modifications.