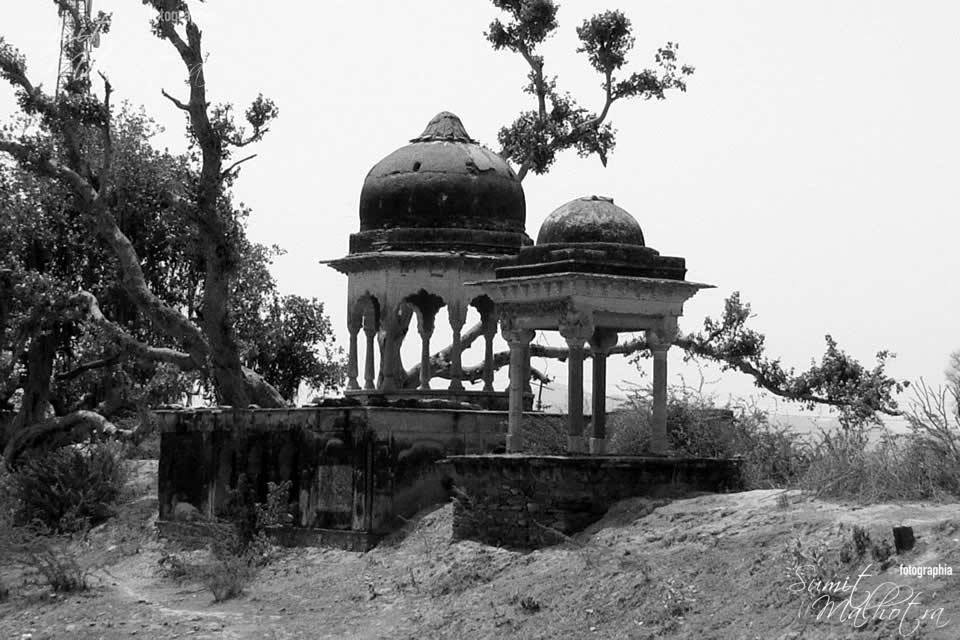 It was a simple and uneventful summer evening in Gurgaon. We were sitting on a terrace and just chatting up. My friend, Shivendra Sharma was to leave for Rajasthan in a couple of days and we were simply elaborating on how Rajasthan would be in the peak of summers. As the conversation majored, I got a bit enamoured to the idea and offered to join in.

Shiven had planned to take on a taxi to drive through the state and we thought that we two will be merrier. My TATA safari and driving expertise would come in really handy for the Rajasthan Road Trip. And that’s how it happened.

Erstwhile called the Rajputana during the British Raj, Rajasthan is an enamouring state. It is also culturally rich with its artistic and cultural traditions. In fact, being endowed with natural beauty and a great history, the palaces and forts of Rajasthan attract people from all over the world. And I was no different when it came to “Romancing Rajasthan”.

Rajasthan is located on the northern side of India and it is hot out there especially in Summers. It comprises most of the wide and inhospitable Thar Desert (also known as the “Rajasthan Desert” and “Great Indian Desert“). Overall, the thought of driving through Rajasthan’s desert and cities was incredible. So finally, Here is the rundown of how we did it.

So here we were on Day 1 of the 5 day Rajasthan Road Trip. By and large, our target was to get to Bikaner by evening. Hence, we moved from Gurgaon at 7:00 hours in the morning. Though, I found contrary to the popular belief that Rajasthan is absolutely beautiful in Summers.

Did I mention the roads are empty too? We travelled through National Highway 8 and then moved right from Kotputli to Neem Ka Thana and then onwards to Sikar. Above all the roads were unblemished all through the route. We found some great unpretentious and healthy food to eat too. Finally, we reached Bikaner around 16:30 hours.

Actually, please enjoy the first batch of pictures – through the day and into the evening. 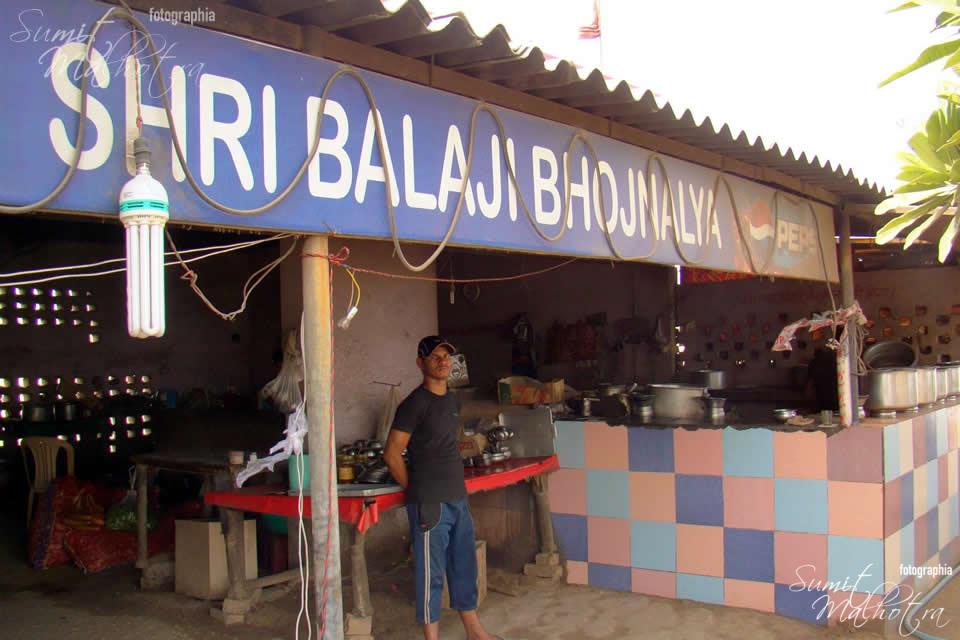 So, everyone at Shri Balaji Bhojanalaya - NH 8, stood in attention very conscious of the pictures being taken. Actually, look towards the left and check out the amount of raw material that was just delivered. 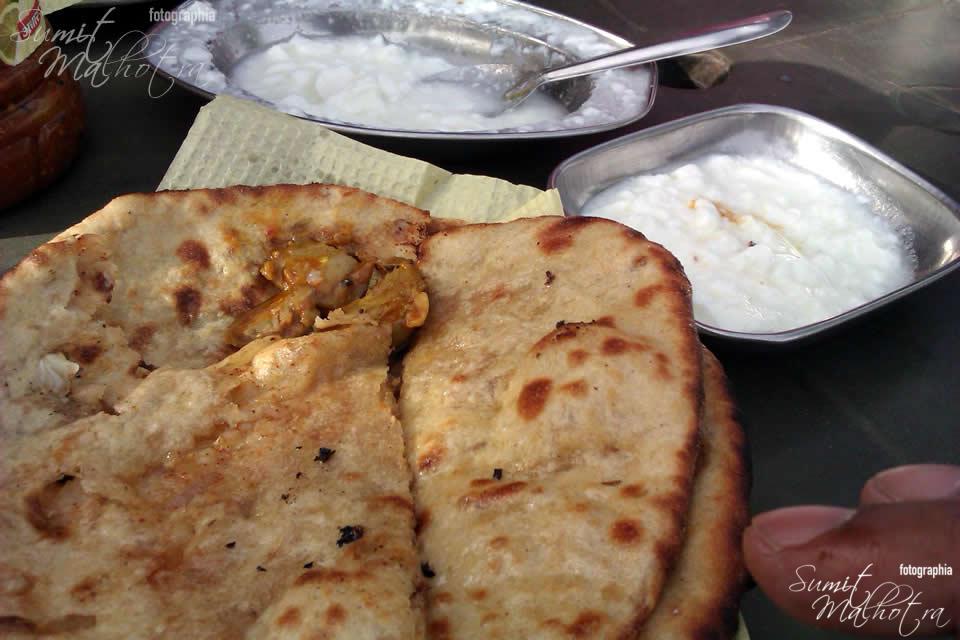 And, as Shivendra Sharma put it "unpretentious and tasty breakfast". Powerful, punchy, crispy, hot from the tandoor paranthas at Shri Balaji Bhojanalya on NH 8 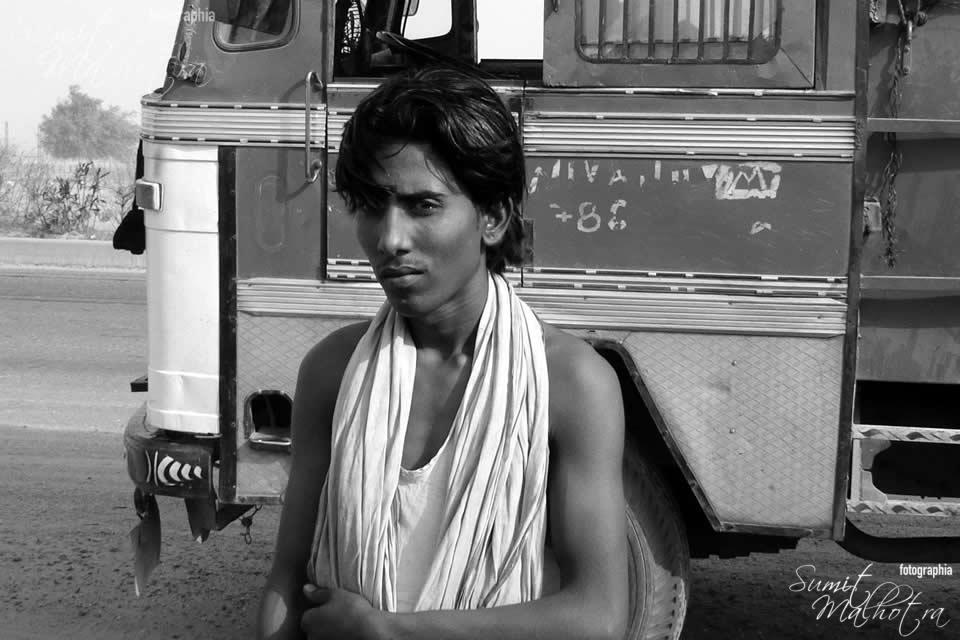 Truck's Cleaner Boy. So if you don't get the expression right this time, I have all the right to shoot you. And the subject warned me. He even asked me where I lived. 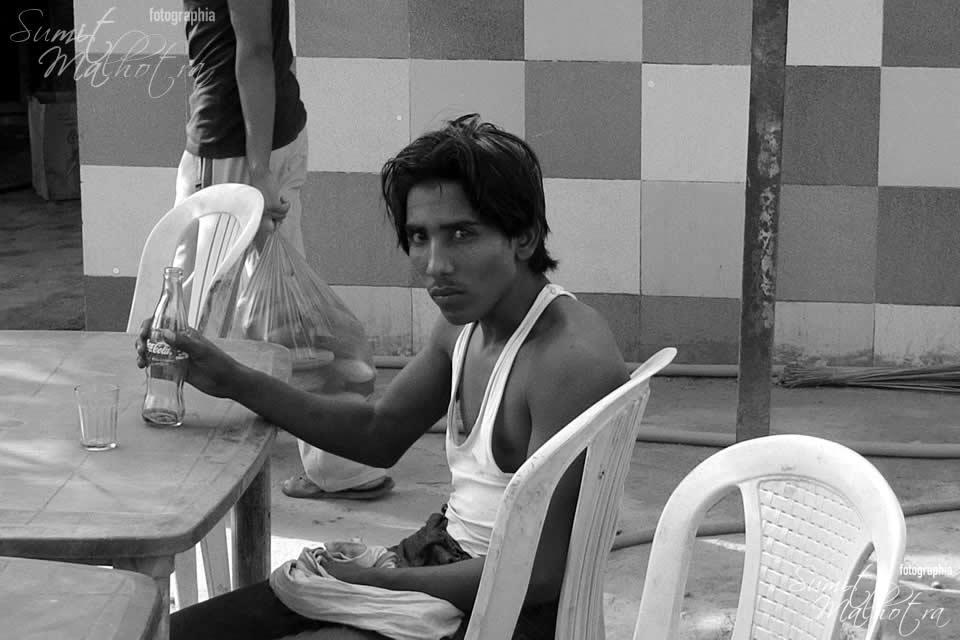 Amazing! In fact, if someone can have coca cola at 8.30 in the morning, there has to be something special about the person.

So Rajasthan is famous for its Old canopies or "Chattris". Finally, here are some Chattris with an extensively spread tree enroute Neem Ka Thana 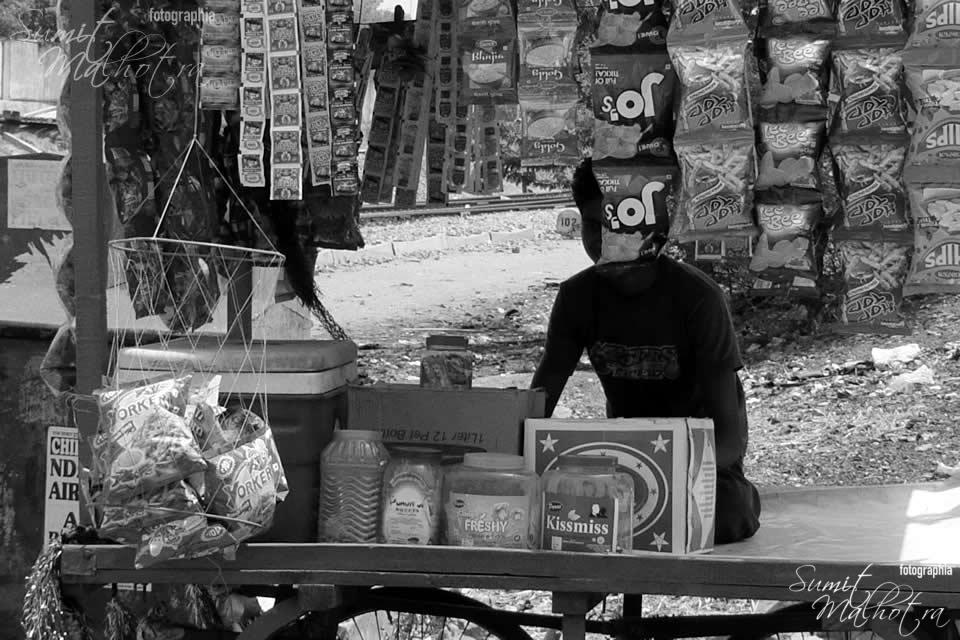 Vendor stall at the railway crossing at Neem Ka Thana. In any case he kept shying behind the hung packets and kept playing coy. 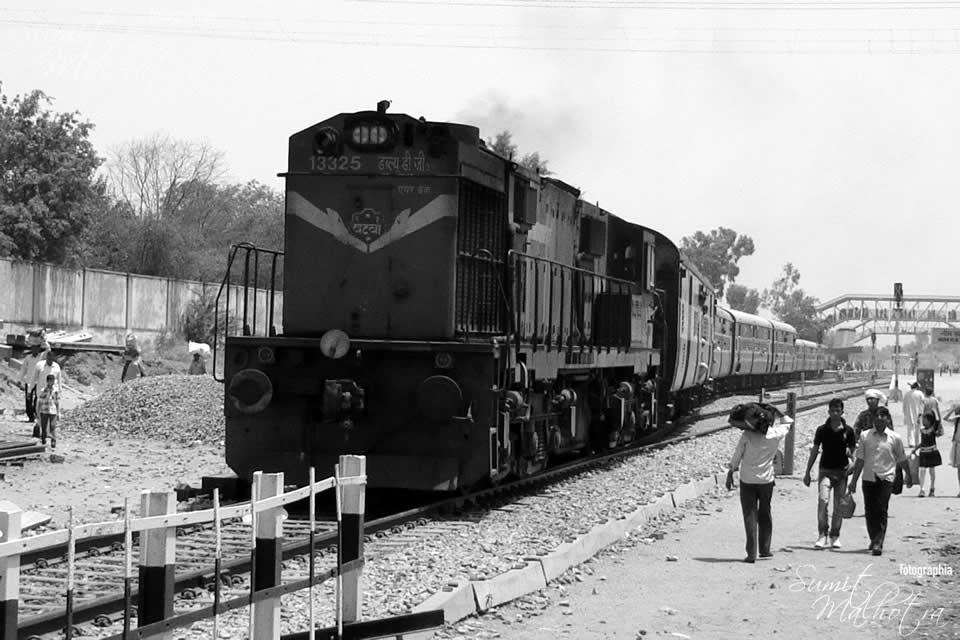 Neem Ka Thana Railway Station. We were actually waiting for this train to leave the platform at Neem Ka Thana. However, it took its own sweet time. 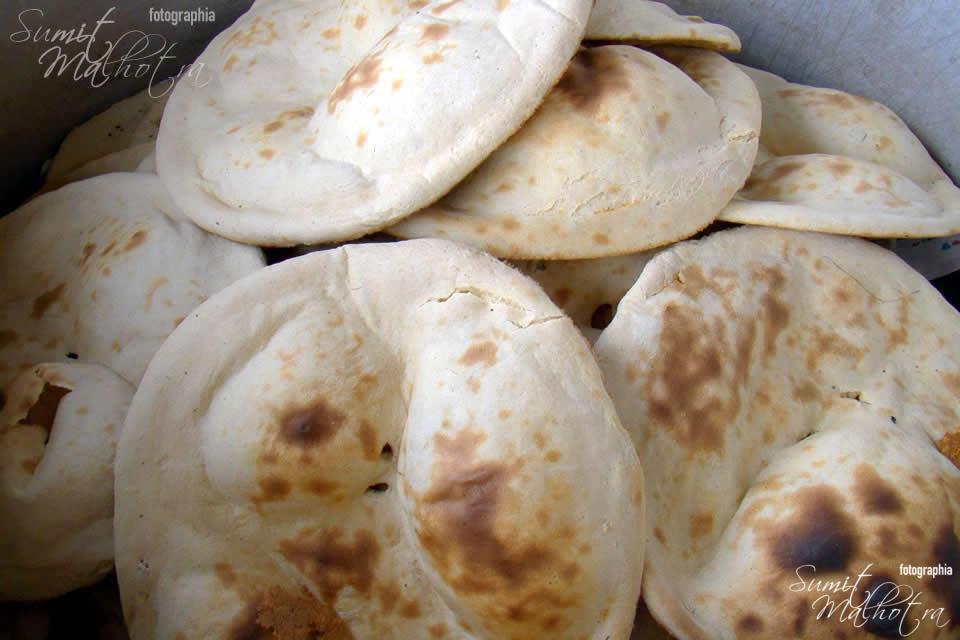 We demanded and as a result fresh khamiri rotis taken out of the tandoor right in front of us. Best when fresh. This was at 2 Hotel Dilli Darbar 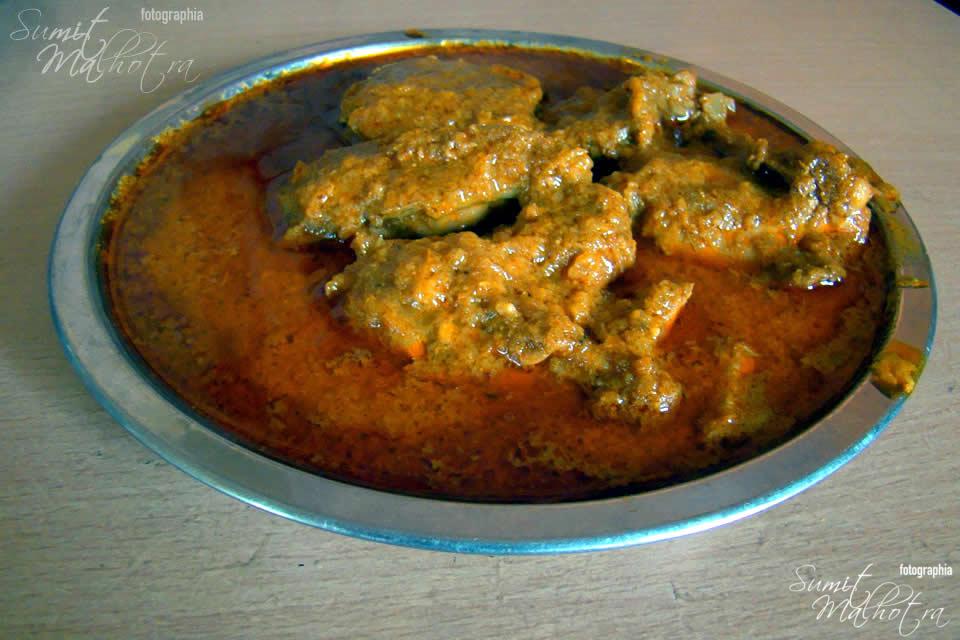 Again a spicy chicken curry. But do note the similarity in the colours of both dishes. Tastes, though, were hugely different. 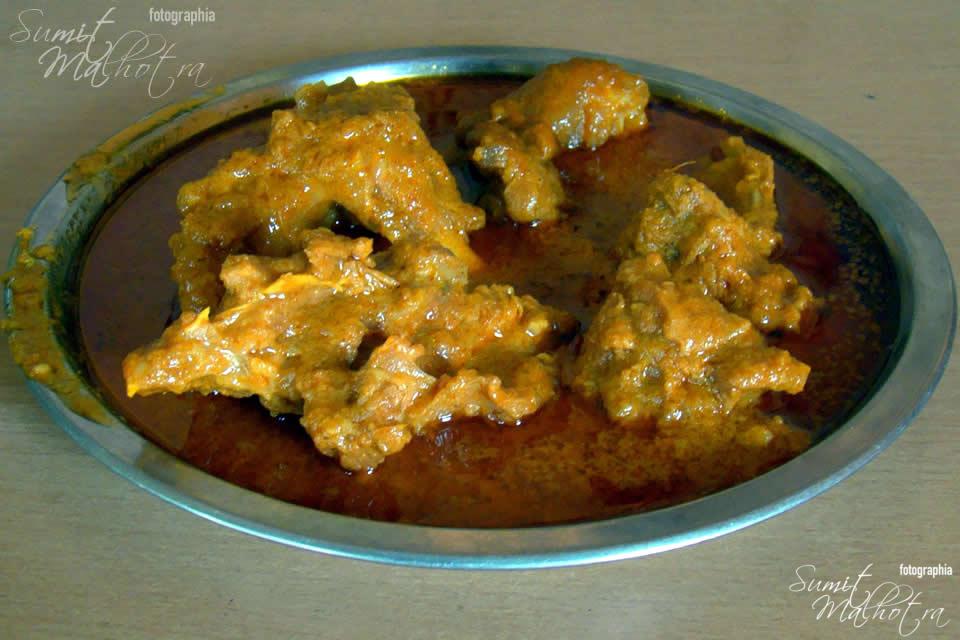 Spicy mutton with and extremely delicate flavour of saunf in it. However, not more, not less .. just right. 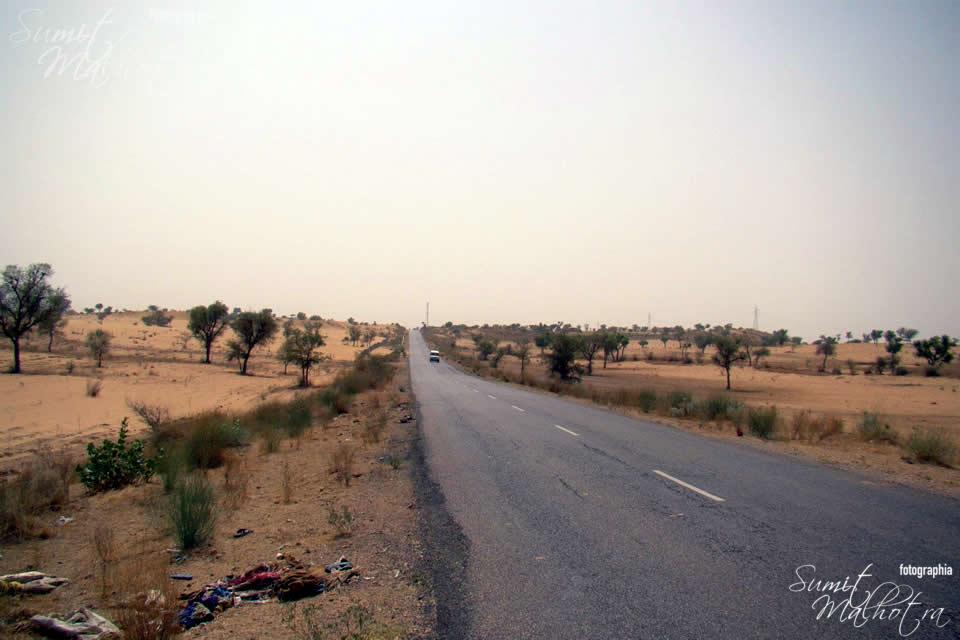 Rajasthan State Highway enroute Bikaner. The road never ends. This road sure was a friend. The Tata Safari got its due today 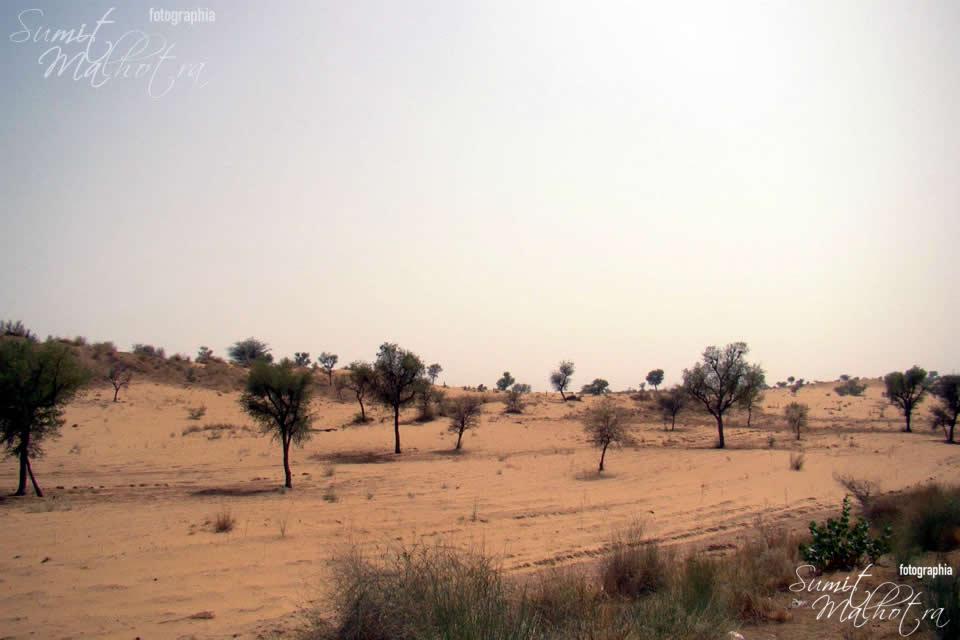 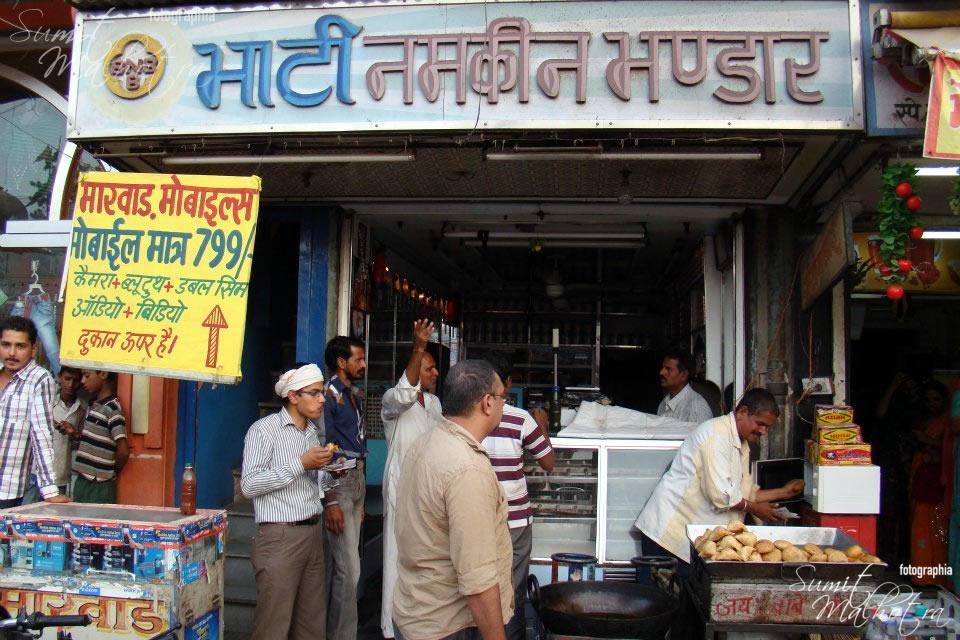 Bhati Namkeen Bhandaar was right at the begining of the bazaar, hence, a comfortable but not a disppointing choice. While Shivendra feasted on Mirchi Vada and Kachori, I enjoyed a really crispy and very different samosa from what we are used too. Seemed like it was right out of my school's canteen. It had a unique tangy flavour that still remains on my palate. 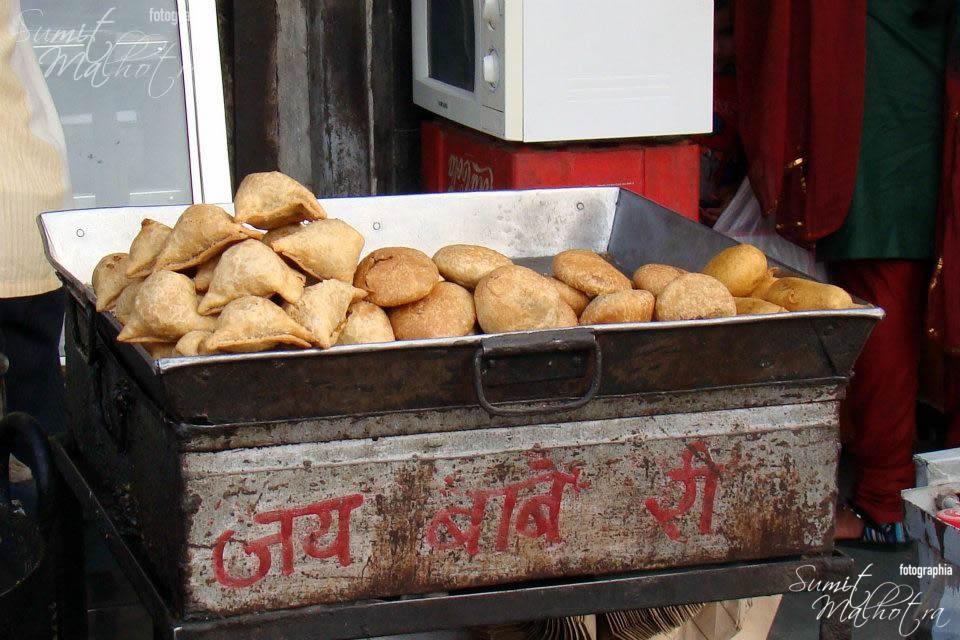 The goods. You could either pick them up right from the tub or ask them to be warmed up which was duly done, not in the kadhai that you saw in the previous photo, but in the white box right behind this, which turned out to be a Samsung microwave owen. Some things are just done simply 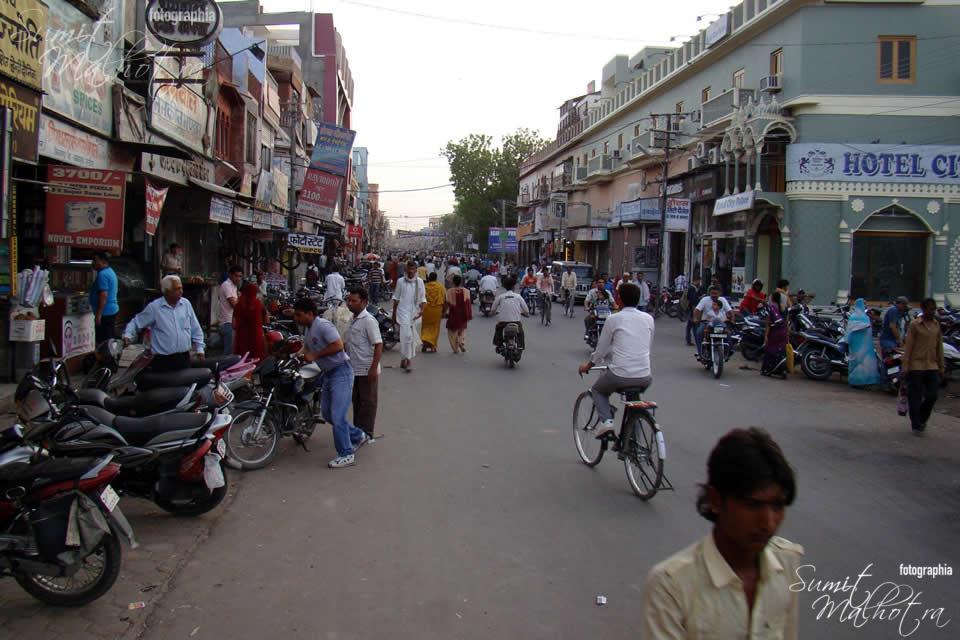 The bustling Sunday bazaar in Bikaner (especially when it was a holiday). When we arrived around 16:20 hours, the place seemed totally deserted, however, by about 19:00 hours we could't walk without getting stepped on or stepping on another's toes. 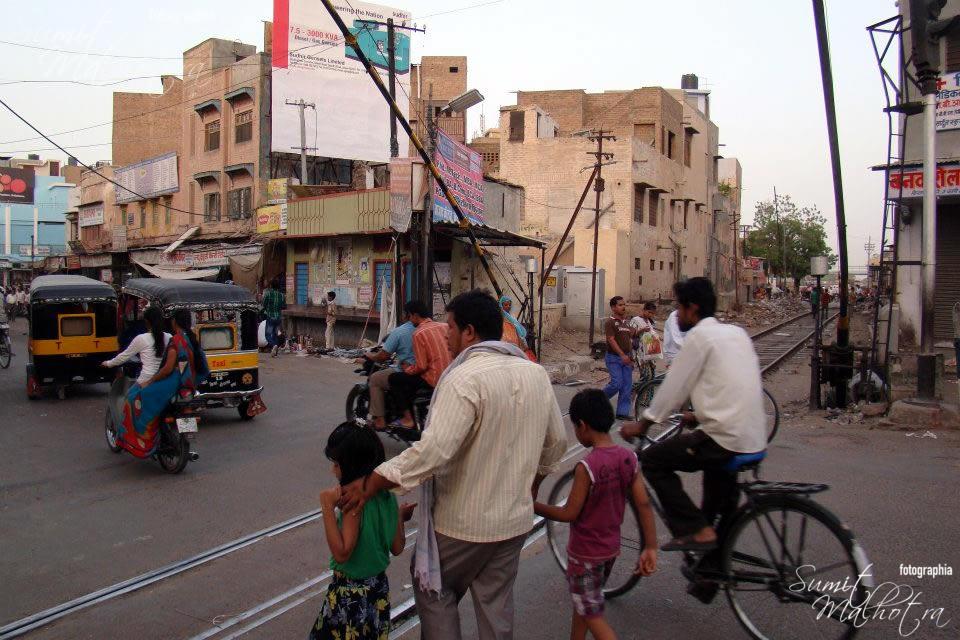 Bikaner is One city in India where I was astonished to find the railway tracks (yes, they are used) passing through the main bazaar. If you strain your eyes towards the right, you may find a glimpse of a platform which is the Bikaner railway station. 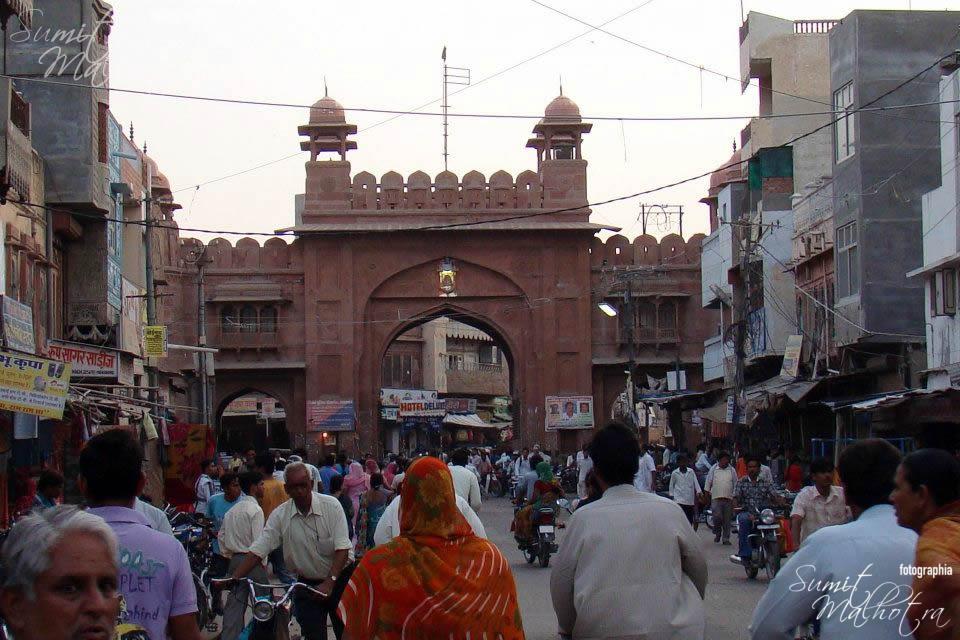 Bikaner Gate. At the end of the bazaar stood this gigantic darwaza made out of red stone. I am told there are 7 Gates in Bikaner
BikanerNeem Ka ThanaRajasthanRajasthan Road TripSikar
0 comment
0
FacebookTwitterPinterestLinkedinTumblrRedditStumbleuponWhatsappEmail