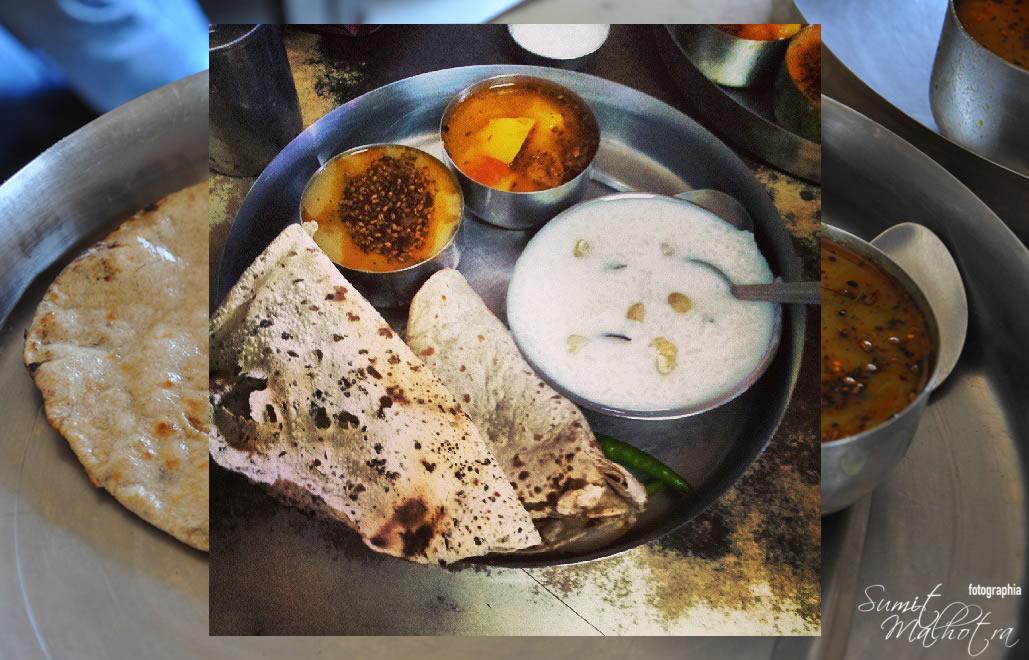 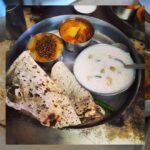 Phone No.: Not Available

Cuisine: Local Restaurant (Dhaba)
Vegetarian Only: Yes! No Onion; No Garlic (Satvik)
Do they deliver: No
Takeaway: Yes
Do they cater outdoors: No
Hours of Operation: 08:30 AM TO 10:00 PM

Meal for Two: Rs.160! No kidding
Discount Available: No
Bar: No
Credit Cards Accepted: No
Airconditioning: No
Smoking Permitted: Yes! Outdoors
WiFi: No
Music: No (Live: No)
Parking: Find your own (Valet: No)
Outdoor Seating: No

Gurgaon’s Sadar Bazaar is a bustling place at any time of the day. It’s the market for every one that sells everything from a pin to a plane .. well not quite the case with the real plane. But, you do get almost everything you need to run your household smoothly and still not burn a big hole in your pocket (that Shopping Malls in Gurgaon will ensure). It is also a haven for food lovers with delicious goods being churned out from small and large eateries spread all over the market. 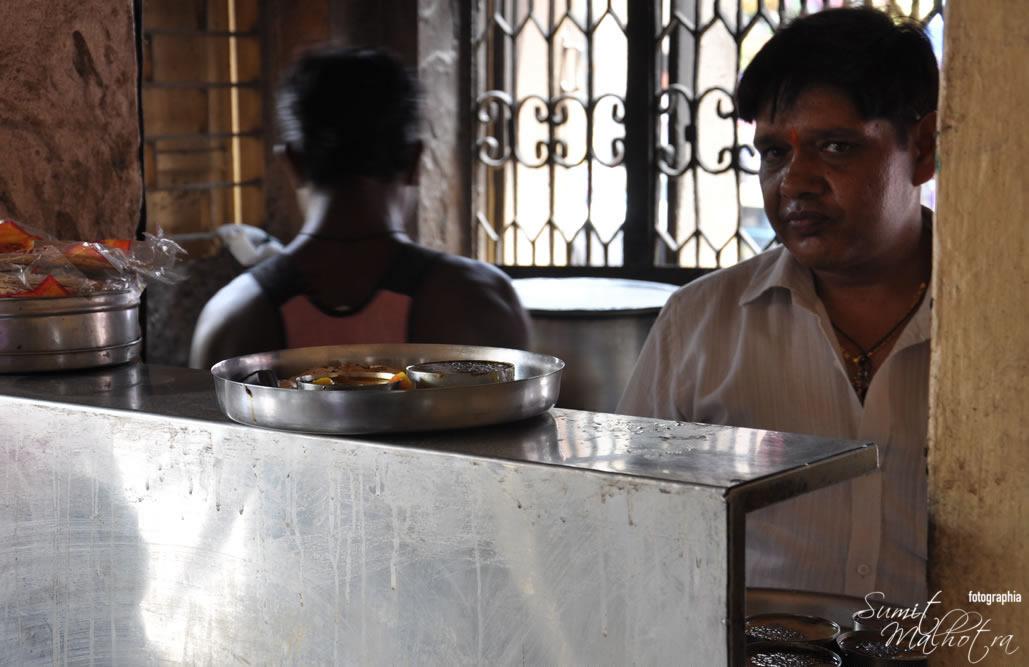 It was a fiery afternoon when I went off to have luncheon at one of the most respected Dhabas in Gurgaon’s Sadar Bazaar – “Panditji Ka Dhaba“. Started in 1951, its a small albeit popular street-side eatery that seats barely 15 people on small desks and benches in a fairly cramped space. One has to wait for their turn during lunch hours. I sweated & waited. 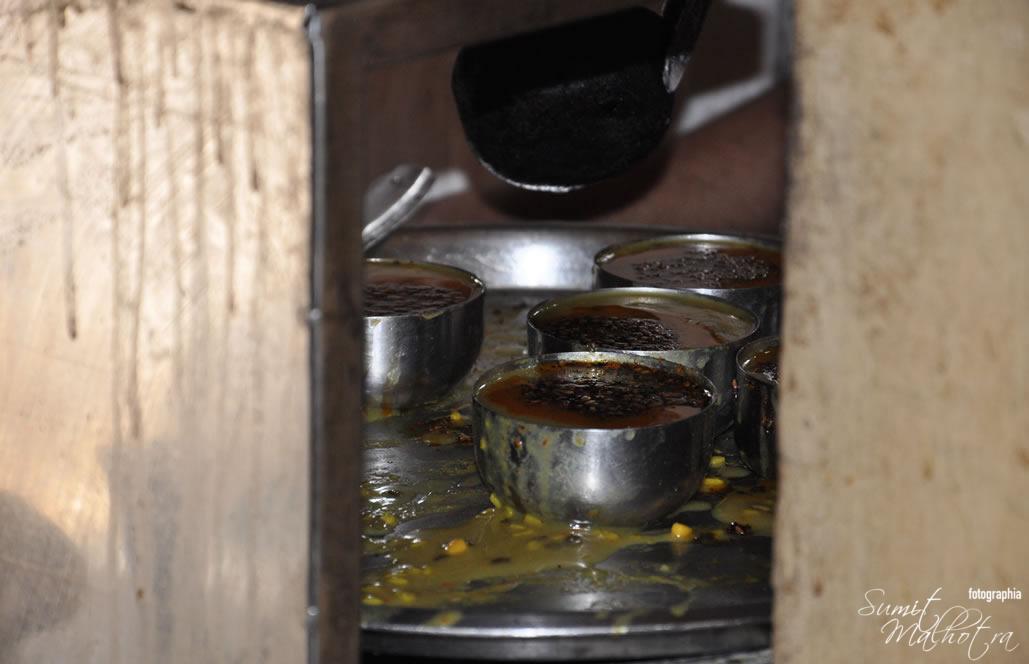 Panditji ka Dhaba has a fixed menu of six humble items (the seventh son “salad” got struck off their list for unknown reasons). Don’t get me wrong, this humble repertoire is honest food and just what the doctor orders when they prescribe “nutritious” food. The fact was chorused by two gentlemen (one was a retired Colonel) we spoke to who have been eating there since a decade. That too everyday while their wives/ mothers were away. Talk about not missing Home, Moms and Missus – Panditji to the rescue. 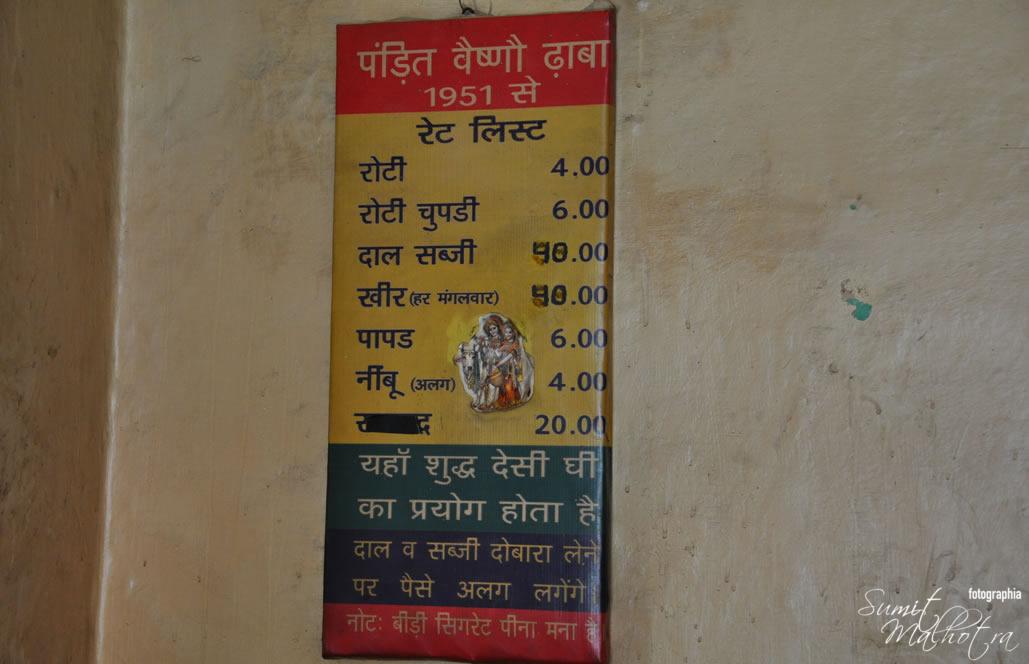 Panditji ka Dhaba serves Satvik food made in “pure desi ghee”, that is, food made without onions, ginger or garlic but lot of, well, “pure desi ghee”. The menu consists of Dal & Subzi (Rs.40), and Roti (Rs.4). Add a blob of ghee to the roti & make it “Chupdi Roti” for another two rupees (Rs.6). Papads (Rs.6), & Lemon (Rs.4) are the next two items on their extensive menu. Finally, they make a special Kheer (Rs.40) with a garnish of coconut and cashew slices that is only available on Tuesdays. I was fortunate. It was a Tuesday. 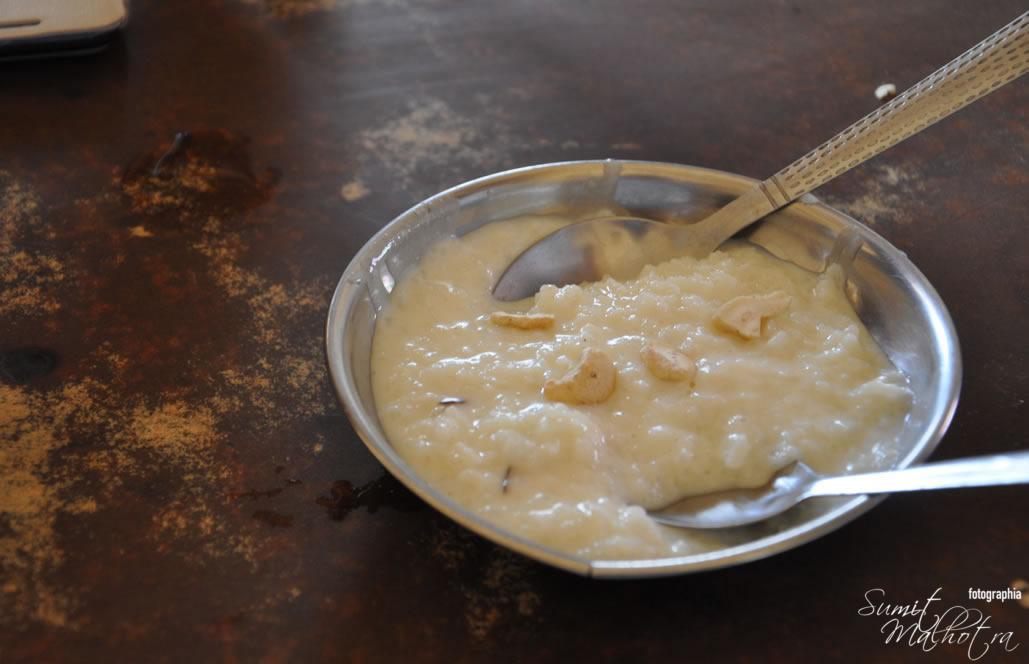 So whats so special about this place which is not really great to look at and makes you sit & eat like school kids? 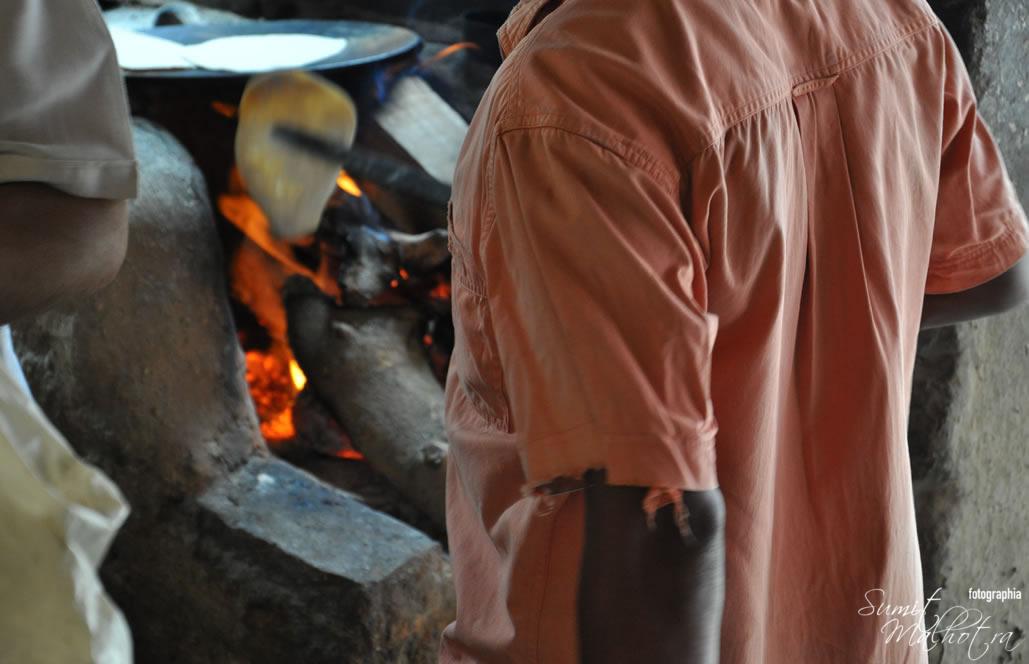 The Zeal of Service

I reckon its the zeal with which the current Panditji (3rd Generation) serves his patrons in the tradition set by his Grandfather – the original picture-on-the-wall Panditji. I found the man behind the cash (box) proud of his establishment yet humble towards his patrons. The warriors, peasants & fill in the blanks all eat comfortably under his umbrella.

The food here is not only nutritious but also full of flavour. The jeera-ghee tadka (tempering) on the dal-sabzi combo did the job perfectly to accentuate the taste. One can add some more fire to it with green chillies that are distributed for free. The food is served hot and so are the rotis that are freshly baked on a cast iron griddle perched on a three side open clay oven warmed by a hardwood fire. These are aptly called “chulhe wali roti” because of the followed process. And finally, finishing this spectacular meal with Kheer sweetened just rightly is the perfect closure to the whole deal.