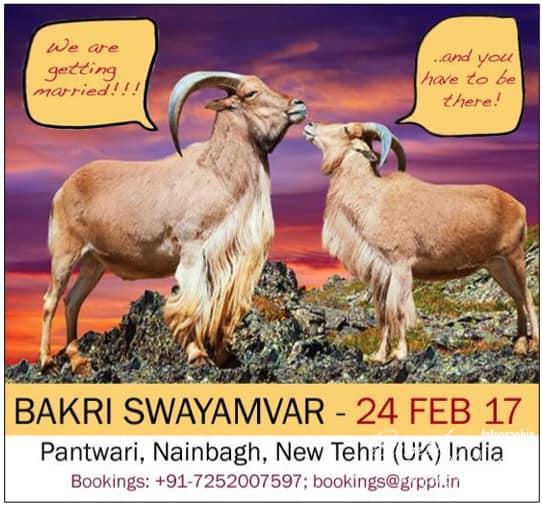 Bakri Swayamvara 2017 – Green People is promoted by an incredibly zealous junior of mine from college, Roopesh Rai. I recently had the opportunity of meeting Roopesh after many years last month at Kanatal, Uttarakhand and heard about his initiative. This was during my visit to Kanatal from Gurgaon.

Green People is a socio-commercial organization working closely with marginalized farmers in the Himalayas. Their objective is to initiate a process of reverse migration; it is a cause of concern for the new age demographic balance. They are working inside-out in Himalayan villages and keep coming up with initiatives that boost rural tourism. This also creates a conducive environment for the rural populace so that they become self-sustainable in every possible way. Their style has always been different and serious initiatives are being undertaken in different & entertaining ways to promote them.

One of their recent initiatives is Goat Marriage (translated as Bakri Swayamvara in Hindi), which they are going to conduct on 24th and 25th of February 2017.

Swayamvara is one of the ancient ways of Hindu Marriage, wherein the bride has complete freedom to choose her life partner. Needless to mention, that in ancient times, selection of life partner was done keeping in mind “race improvement”. However, Green People are doing this for goats.

The idea behind initiating Goat Marriage or Bakri Swayamvara is to revive the age-old tradition of rearing goats for livelihood. Goats have been an integral part of our civilization. Though, now goat herding is not considered to be a lucrative occupation. Thus, there has been a lot much inefficient breeding within local herds.

Using entertainment as a tool in Bakri Swayamvar, Green People intend to initiate a sense of pride within herders for whatever they are doing and thus motivate them to do it the right way. The concept is to create the right model of breed transfer and breed improvement.

A mass wedding with a twist where neither the brides nor the grooms will say “I do”. Instead, they will bleat is what you can expect at Bakri Swayamvar! The wedding would take place just like any other Indian wedding where priests would chant mantras and goat bride and goat groom would take pheras traditionally.

The mass wedding will involve goats of over 500 villages, and a musical band party will be at hand to play music. Catalyzed by Green People, a community that works towards ecologically responsible agro-tourism movement and runs home-stays in the name of Goat Village in Uttarkashi and Tehri district, the Bakri Swayamvara will perhaps set a benchmark in Uttarakhand on the lines of Rajasthan’s Pushkar camel fair.

The villagers will assemble at the festival where experts including veterinary doctors will pick healthy goats. Considering their nativity, goats will be picked from distant villages for the ‘Bakri Swayamvara’. Amidst Vedic hymns, the chosen lot will be wed. The festival will be based on scientific and selective breeding. Healthier goats would mean healthy offspring, better lactation and optimum use of milk.

Green People is also selling farm produce of regional micro-farmers under the brand of ‘Bakri Chhap’. There seems to be a lot of potential of marketing organic Himalayan goat cheese in five-star hotels and upmarket stores once the local production of goat milk picks up. Eighty per cent of goats in India are reared for slaughter. That’s because villagers pay little emphasis on its breeding. Goat’s milk and its products hardly contribute 4% of the market share. It’s necessary to focus on bettering gene pool.

While meat would be a one-time settlement for villagers, milk and its products would help in deriving better market and long term returns. Bakri Swayamvar aims to promote all this.

Did you like what you read? If yes, decide which side you would be from and connect with Rupesh Rai on +91 9818889005 to make your bookings for the first-ever Bakri Swayamvara.

Cuisine of Uttarakhand – Food from the ‘Dev...

A Wanderer’s Sermon – Words of Wisdom at...