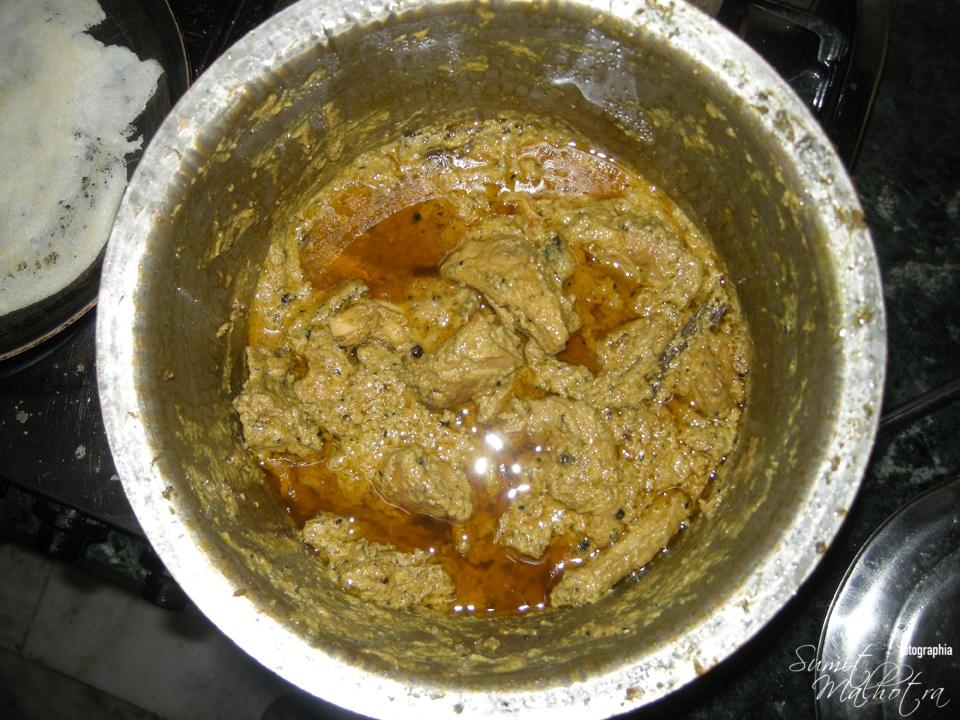 I got introduced to Nitin Pande lately through a Facebook introduction that seemingly happens automatically when multiple people start commenting on a post. Nitin is actually a friend of my friend Maneesha Chadha and is based out of Singapore. Though I am yet to meet him in person, he seems to have the same zest for life and food as I do.

He recently sent in a recipe of Mughlai Chicken Korma The recipe is not his own but an adaptation from various sources including a well known Pakistani chef. No names were supplied of any of the sources. However, since Nitin Pande had very graciously shared this recipe with us, I decided to christen it Pande Ka Chicken.

Once I read through the recipe, my taste buds started tantalising us and I decided to give the Mughlai Chicken Korma or Pande ka Chicken a test drive. My cooking sojourn was ably assisted by Sidhant, who also proclaimed his career calling on this day. The 9-year-old very confidently informed everyone that he was going to open “The Best Non Vegetarian Restaurant in the World” when he grows up.

Sidhant and I went off to MG Road Spencer’s well in advance to get our ingredients in order and picked up additional stuff for burgers on Sunday and some Thai chicken which we would make in one of the coming days.

So as I am writing this down now, the refrigerator is overflowing with items of various shapes, sizes and colours. With the amount of stuff lying in, I can actually throw a party for ten people without having to go shopping again this week. Any takers? :) 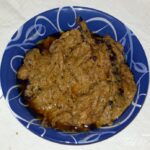 Though the plan was to prepare the mutton mince mixture for burgers for Sunday, I decided to work on the Mughlai Chicken Korma too.

The only difference with which I approached the recipe was that I tripled the portions from the suggested ones and added a South Indian element to it – Dosas with which we would be devouring it down (I had picked up a prepared mix for the Dosas from Spencer’s).

Since the quantities had trebled, I had to be careful in optimising them for changed volume as well. I took a Copper Degchi and threw finely grated paste made up of 5 medium onions, 16 odd cloves of garlic and about 4 inches of ginger into warm 250 ml of oil.

Grating does take time. You can always use a blender for the same. For frying the mixture, do a half and half of extra virgin olive oil and vegetable oil. Why I did this you will surely note towards the end?

I added the chicken pieces and gave them a nice couple of swirls in the oil till they were nicely coated.

I left the Pande ka Chicken on slow heat after this for about 15 minutes or so.

Two of my other friends, Shakti Khanna and Navin Sellaraju arrived for lunch. And, Shakti didn’t seem to be very excited when we told her about our plans of having her make the Dosas.

Sidhant was all over the place bouncing around, helping us with stirring, managing the stores, keeping the place clean and loving every minute of what he was doing. The chicken was almost done by now and looking good though it had to be taken through the final leg of finishing. I then added powdered green cardamom (10 odd numbers) that I had shelled and kept aside previously which added greatly to the aroma of the Pande ka Chicken.

Upon looking at the Pande ka Chicken, and though it was flavourful, I knew that it would not be spicy so I divided the mixture into two parts and go with the recipe with the first while he would give it a spicy twist to the second.

I took one part of the almost done Pande ka Chicken and added to it about 100 ml of cream with 6 spoons of curd. The only item that remained to go in was about 4 tablespoons of butter and the dish was ready (as per Nitin’s recipe).

But something did not seem right by giving it the 2-3 minute treatment as suggested in the recipe so we decided to let the chicken simmer till the mixture of cream and curd combined properly with the thick masala and the oil separated nicely after which I added another 4 tablespoons of butter.

To the second part, I added a few packets of chilli flakes for the spicy twist to his part of the chicken and left it to reduce and finish.

The kitchen was subsequently taken over by Shakti and Sidhant who were trying their hand at making Dosas and not making much of a head away. A rescue cry was sent out to Navin, who jumped on his feet as an ever devoted husband he always is, to bail out Shakti – the Dosa damsel in distress.

It turned out that the Dosa dough needed to be diluted a bit more before nice crunchy Dosas could be brought out. Once Navin fixed the consistency, Shakti and Sidhant both had a field day making Dosas for everyone.

While I relished the combination of Dosas with Pande Ka Chicken, others at a later point opted for Lebanese bread I had sitting in the refrigerator. On the overall experience, Pande Ka Chicken scored over our local twist, which also was quite good. Guess the scoring points were more due to the Punjabi sweet tooth at playback then. If you want to see and try the structured recipe as Nitin sent in, please check out the Mughlai Chicken Korma Recipe. Though, I strongly suggest that you use Ghee instead of the oil even if you are following Nitin’s recipe.