Learn How to Make Ensalada Rusa or Russian Salad or Olivier Salad? A salad recipe that is famous all over the world. 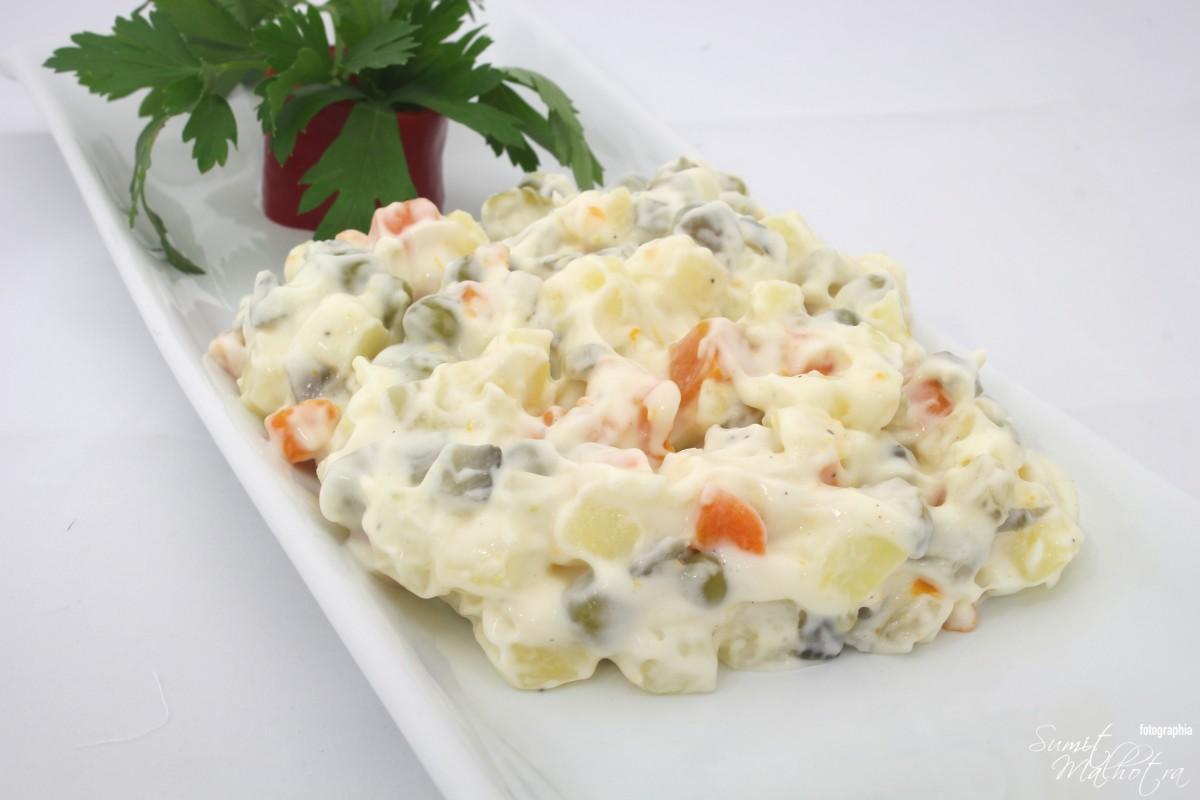 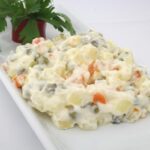 It is perfect as a side dish and even a make-ahead lunch or dinner. This salad is the standby of every tapa bar, and is often dressed with homemade mayonnaise.

The preparation of this famous sauce is the skill that comes easily to Spanish housewives who maintain that it has the origins in Mahon, Menorca. It cannot be made in small quantities and you can store any extra in screw top jar in the fridge.

This no just any mayo-potato salad, unlike American potato salads it has a lot more refreshing ingredients and has fun pops of flavours. Its a recipe you should definitely try.

Yes! Russian salad with Mayonnaise is a healthy salad.

But this depends up the ingredients that you use. In fact, Siberian scientists have made some recommendations that are mentioned at the end of the post.

Let’s look at the benefits of its ingredients.

Potatoes are a good source of fiber, which can help you lose weight by keeping you full longer.

The fibre in carrots can help keep blood sugar levels under control. And they’re loaded with vitamin A and beta-carotene, which there’s evidence to suggest can lower your diabetes risk.

Mayonnaise should be a homemade sauce of olive oil, egg yolk, mustard and lemon juice.

What is the history behind Russian Salad?

Who invented the Russian Salad or Salad Olivier?

Belgian chef Lucien Olivier is credited with inventing the salad in the 1860s during his tenure at the Hermitage, a restaurant in Moscow. To give him credit, it got named as Olivier Salad initially.

Over the years, Olivier salad gained in popularity not only in Russia, but through the rest of the Soviet Union & Europe. And today throughout the world, this salad is often called the Russian salad.

In Poland, this salad is called “Salatka Jarzynowa”(which translates to a vegetable salad).

It is also believed that the original salad recipe contained cubed meat and was a complete meal in itself.

The exact recipe – particularly that of the dressing – was a zealously guarded secret.

But it is known that the salad contained grouse, veal tongue, caviar, lettuce, crayfish tails, capers, and smoked duck, although it is possible that the recipe was varied seasonally.

The original Olivier dressing was a type of mayonnaise, made with French wine vinegar, mustard, and Provençal olive oil; its exact recipe, however, remains unknown.

One of the first printed recipes for this salad by Aleksandrova, appeared in 1894.

It is based on a version of Lucien Olivier’s Sous Chef (the guy who stole Olivier’s recipe) Ivan Ivanov’s Stolichny salad, and only faintly resembles Olivier’s original creation.

The preparation of this salad is very simple, however, it requires some extra time, because vegetables need to be cooked and cooled before chopping. And, mayonnaise needs to be made.

What goes into Ensalada Rusa or Olivier Salad?

What are the ingredients for Ensalada Rusa or Russian Salad?

Even though the modern Olivier salad is much different from its original preparation, it will forever be the most iconic Russian salad.

My version is of this recipe is inspired by the original salad recipe and some ingredients have been replaced because they’re healthier, allergy friendly and lighter on the stomach.

However, it cannot be compared to Olivier’s recipe at all since, it seems even his closest sous chef, Ivanov, did not know it.

When Ivanov tried to recreate the salad, the gourmands of the time concurred that the dressing on the “Stolichny” salad was of a lower quality than Olivier’s, meaning that it was “missing something.”

However, the list of ingredients for my recipe is very short and you may have already everything needed in your pantry. These are as follows: 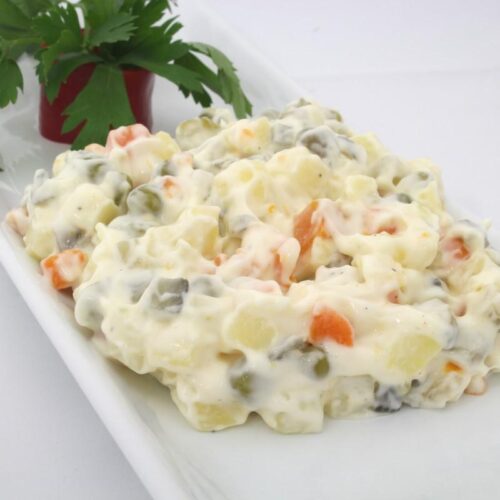 Be mindful of what ingredients you’re adding into your salad. Try to avoid  a lot of pickles since they add a lot of saltiness.

This salad is an all time favourite all over the world. Some serving or eating suggestions follow below

What can I do with leftover Salad Olivieh?

How to use leftover Olivier Salad?

It is a common fact that it tastes better the next day. I’m not suggesting you make tons of it, but make sure you prepare enough so as not to regret the next day that you didn’t make enough.

Can I Freeze Ensalada Rusa?

Can Ensalada Rusa be Frozen?

This salad may be refrigerated in an airtight container for up to 3-4 days. Freezing the salad is not recommended, as it can easily get soggy.

How to reduce the calories in my Ensalada Rusa or Olivier Salad, Salad Olivieh?

How can I you reduce the calories in my Russian Salad?

Russian scientists have proposed changing the traditional ingredients of the popular Olivier salad for a healthier and low-calorie alternative.

This salad, made of chopped potatoes, meat, carrots and other vegetables along with eggs and mayonnaise, has been a staple of Russian New Year celebrations for more than a century.

The nutrition scientists at the Siberian State Medical University say that cooks should swap out three key ingredients: mayonnaise, sausage (if used) and pickles.

They suggest making a homemade sauce of olive oil, egg yolk, mustard and lemon juice that will “very much remind you of the mayonnaise we’re used to” but with far less calories.

You can even replace the mayonnaise with hung and thickened yogurt or curds to lighten it up even more.

Sausages (if used), which contains trans-fats, should be exchanged for boiled chicken or turkey.

Pickles should also be taken out because of their high salt content, which can lead to swelling and increase the appetite.

It is perfect as a side dish and even a make-ahead lunch or dinner. This salad is the standby of every tapa bar, and is often dressed with homemade mayonnaise.

The preparation of this famous sauce is the skill that comes easily to Spanish housewives who maintain that it has the origins in Mahon, Menorca. It cannot be made in small quantities and you can store any extra in screw top jar in the fridge.

This no just any mayo-potato salad, unlike American potato salads it has a lot more refreshing ingredients and has fun pops of flavours. Its a recipe you should definitely try.

Yum! This looks so delicious and tasty!