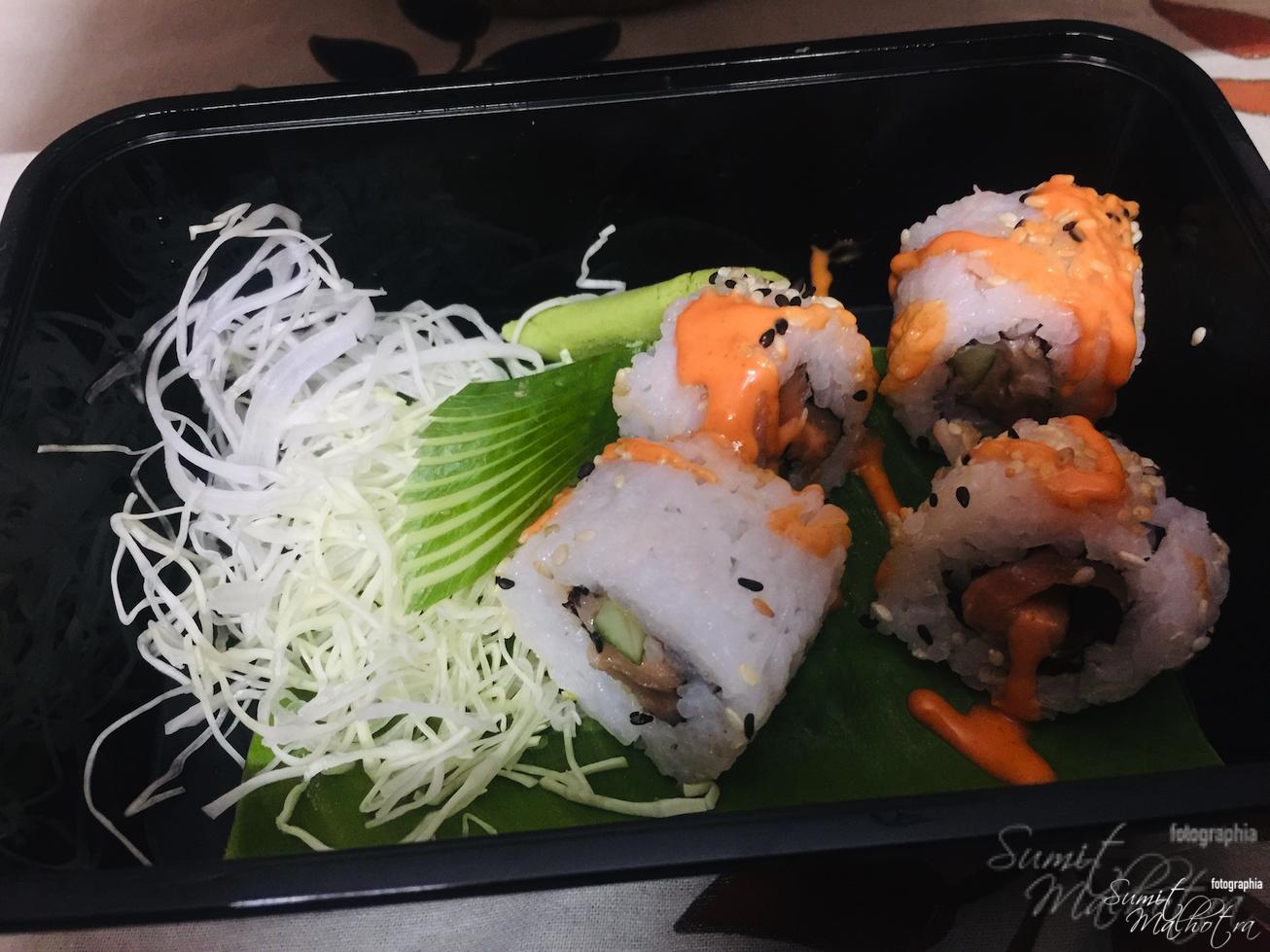 Shiso Yu Choi Gurgaon serves pretty average sushi in my opinion. Their cover packaging is classy but containers are messy. Watch out for tasteless experience and spurious food products. I will recommend not to order, but if you insist go ahead by all means.

Shiso Yu Choi Gurgaon – Read all about Shiso & Yu Choi Gurgaon. Find it’s details, read about my experience, see the photos and then decide if it is worth your precious order. Do comment on the article if you please. It’ll be great to have feedback from you too.

The name seems to have been combined and derived from Shiso (Japanese), which is a the scientific name of Perilla frutescens var. crispa. Shiso is a herb in the mint family Lamiaceae.

The second part Yu Choi (Chinese: Mandarin) is grown mainly for the young leaves and flowering stalks. Its scientific name is Brassica rapa.

Despite this herbal inspiration, there was no evidence of either of the herbs in the food, the sushi I ordered, from this outlet.

But the amalgamation of this nomenclature is fairly clear to me from the name. It is all in the name, Sorry!! Shakespeare Saab.

So it means they have to have multiple kitchens. If this is actually true, then a possibility exists that this outlet may have probably outsourced its food preparation particular to the cuisine from other outlets.

Else, why do they have such a high volume of bad reviews and now I am adding yet another one. Too many cooks spoil the sushi. I suspect but do not know with certainty.

However, this is my logical hypothesis and there is also a probability that it may not be an accurate one. Hence, this disclaimer on my website.

But, I still haven’t been able to figure out their actual name. Is it Shiso Fu Choi or Shiso & Fu Choi? The question about the (&) ampersand remains.

Any clues anyone? Do post your clues in the comments below. Thank you in advance.

Shiso Yu Choi serves dishes from Chinese, Thai & Japanese cuisines. The food I am very partial to having savoured it from childhood while now I make some of it too.

I mulled over their extensive food menu on Zomato app and decided to opt for a Chef’s Sushi Platter, distancing myself from a sumptuous Khao suey which is usually my all time favorite.

Needless to say, that I can’t resist the Sushi temptation as well, especially when you can get to sample four (4) pieces of four (4) varieties in a platter.

I have tried almost all sushi joints in my neighbourhood. Hence, this was a no-brainer and I placed the order.

The platter arrived in time by courtesy of Zomato. The rider was polite and wearing a mask, so full marks are given to the delivery rider.

Their food tale comprises of a different story though than you’ve read above. However, the Sushi were nattily packed and did raise the expectations from the outlet which fell flat once I started eating.

What also came out as a surprise upon opening the nice box of the packaging was that there was no ice pack for keeping the sushi cold. The sushi was placed in black plastic boxes just as most outlets do.

However, I must say that the carry bag was quite sturdy and even looks expensive. It seems that’s where more of the money from the cheap & cheat sushi is going.

Someone at the outlet needs to realise that I did not pay Rs. 886 (including discounts) for the carry bag. That money was paid for delectable sushi but unfortunately the sushi turned out to be fake.

Chef’s Special Sushi Platter I ordered is priced at Rs.1300 + taxes & delivery charges. So it is by no means a reasonable charge for a single man eating. But it is touted as Recommended right on top.

In my opinion, don’t fall for this & read the reviews which by the way I didn’t. Else this won’t have happened. To err is human.

Chef’s Special Sushi Platter comprises of 4 kinds of sushi with 4 pieces each. The dissection of the sushi which seemed to be much smaller than normal (angst) follows below:

To SumItUp: Shiso Yu Choi Gurgaon serves pretty average sushi in my opinion. Their cover packaging is classy but containers are messy. Watch out for tasteless experience and spurious food products. I will recommend not to order, but if you insist go ahead by all means.

Origami – Wonderful Food that is Worth Your Money

Origami – Wonderful Food that is Worth Your...

All About Cumin Seeds | Know Your Spice Jeera (Cuminum...