All About Juniper Berry | Know Your Spice Aaraar (Juniperus communis) 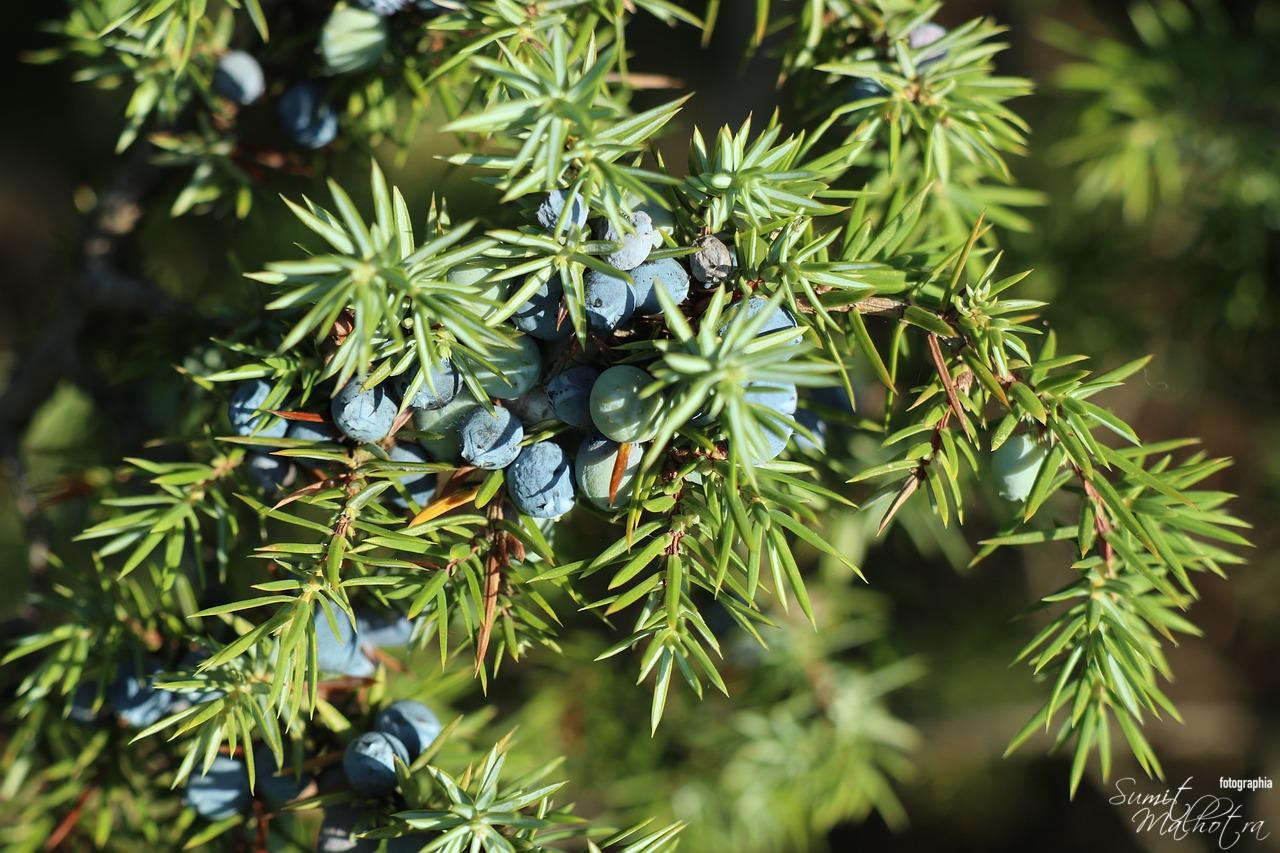 It is also known as hapusha

Juniper is an evergreen shrub sometimes attaining the height of a small tree up to 3 mtrs with erect trunk and spreading branches, covered with a shreddy bark. The trunk diameter is 25-30 cm.

It produces seed cones that are commonly known as juniper berries. Though the berries’ coloring varies, most are deep blue. Their aroma is often described as woody or spicy.

Leaves are straight and rigid, oval shape, about 6-13 mm long and with sharp prickly points.

The fleshy berry like fruit is subglobose, bluish black, dark purple when ripe, 10-13 mm in diameter covered with waxy bloom.

What are the other names of Juniper Berry?

Arar names in other languages are given below.

What exactly is Juniper Berry?

Get to know more about Arar or Aaraar 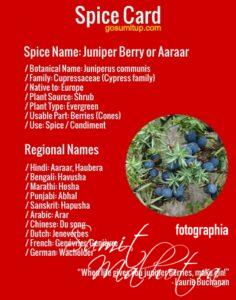 Juniper Berry or Aaraar (Juniperus communis) plant is a member of the Cupressaceae (Cypress family). It is a fragrant and evergreen herb.

Occurring from Western Alaska throughout Canada and Northern USA, in coastal areas of Greenland, Iceland, throughout Europe and in Northern Asia and Japan.

Juniper was once widespread in Europe, except for some low-lying areas around the Mediterranean and it even occurs in small patches of North Africa.

Juniper berries actually aren’t berries at all. They are female seed cones that come juniper plants — a type of conifer (Pinophyta), which is a cone-bearing plant or tree.

Juniper plants vary in appearance and can grow low and wide like a shrub or tall like a tree. Their uniquely fleshy, merged scales make them look like a berry, thus the name.

What is the nutritional value of Juniper Berry?

Juniper berries are a good source of vitamin C, delivering 10% of the Daily Value (DV) of this water-soluble nutrient in a 1-ounce (28-gram) serving.

The berries also pack many plant compounds, including flavonoid antioxidants, volatile oils, and coumarins, which are chemical compounds with various protective properties.

The volatile oils in juniper berries contain substances known as monoterpenes, including limonene, camphor, and beta-pinene.

Monoterpenes have been shown to provide anti-inflammatory, anticancer, antioxidant, and antibacterial properties

What is the chemical composition of Juniper Berry?

Know and understand about chemical composition of Aaraar (Juniperus communis)

Apart from up to 33% sugars and 10% resin, juniper berries owe their use in the kitchen to an essential oil (0.2 to 2%, dependent on provenance).

What is the history of Juniper Berry?

Know more about the origins & the story behind Aaraar (Juniperus communis)

The earliest recorded medicinal use of Juniper Berries occurs in an Egyptian papyrus dating back to 1500 BCE, in a recipe to cure tapeworm infestations.

The berries imported into Egypt may have come from Greece; the Greeks record using juniper berries as a medicine long before mentioning their use in food.

Juniper berries have a long history of being a part of both culinary and medicinal pursuits.

Originally, alcohol was used as a method of preserving the medicinal effects of botanicals, which had the pleasant side effect of making the booze more palatable.

The use of juniper berries as a medicinal botanical in alcohol began in medieval times where the berries were used to flavor whisky in Scotland.

The berries were ground and added to game dishes and cakes in England and Scotland, both for flavoring and to, again, aid digestion.

The earliest medicinal use of juniper berries, though, was in ancient Egypt in 1500 bce to help cure tapeworm. The Romans also used juniper berries to help aid digestion.

The Greeks recorded using juniper berries medicinally long before they used them in food. The major reason for this is because they believed that feeding the berries to athletes gave them good physical stamina.

In Central European folk medicine the berries were considered a cure all for disorders associated with poverty such as typhoid, cholera, dysentery, and tapeworms.

In North America, tribes native to the Maritime provinces of Canada used Juniper for tuberculosis, ulcers, rheumatism and topically for cuts and wounds.

What are the uses of Juniper Berry?

Juniper is an important spice in many European cuisines, especially in Alpine regions, where juniper grows abundantly.

It is the only example of a spice in the botanic group of the coniferae, and also one of the few examples of spices from cold climatic regions, though the best quality stems from Southern European countries.

What is the the taste of Arar or Aaraar?

Juniper berries taste fresh, like pine, and citrusy. They have a touch of both fruitiness and pepperiness. Overall, the flavor of the juniper berry is pungent but pleasantly so. 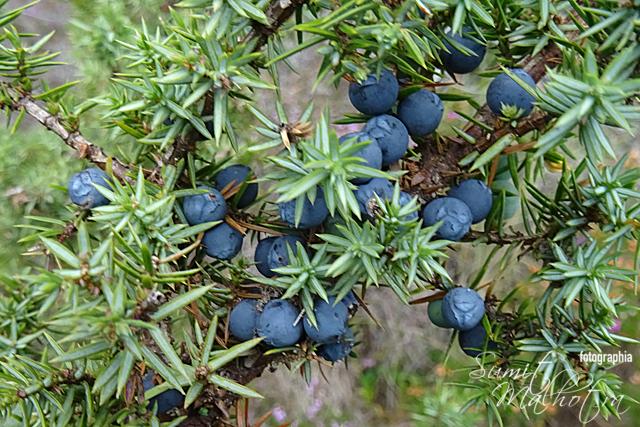 What are the ayurvedic properties of Juniper Berry?

Information about ayurvedic details of Arar or Aaraar

What can I use Juniper Berry for?

Learn how to use Arar or Aaraar in your food & beverages.

If you want a strong juniper aroma and flavor to your dish, crushing fresh berries before adding them to a sauce or marinade is the way to go. For a more subtle flavor, you can toast the berries

How long does Juniper Berry last?

Learn about how long does Arar or Zufa last in storage.

Like most spices, juniper berries quickly loses its potency once ground, so grind only as much as you need for a given recipe. Stored in an airtight & sealed container, whole berries will last for up to 2 years.

How do I store Juniper Berry?

Learn about how to store Arar or Zufa.

You should store dry juniper berries in a dry & airtight container.

Is there a substitute for Juniper Berry?

Rosemary is not exactly the same in flavor, but it’s similarly pungent and aromatic. Fresh rosemary would be ideal to mimic the piney flavour.

Where do I buy Juniper Berries from?

Where to Locate Arar or Aaraar in the Grocery Store?

Juniper Berries are available for purchase from grocery stores. Look for them in the spice section. These spicy, rich berries can be purchased either dried or fresh and whole or crushed.

You can also buy Juniper Berry products & oils online at this link.

What are the health benefits of Juniper Berry?

The following are health benefits of Juniper Berries, Arar or Aaraar 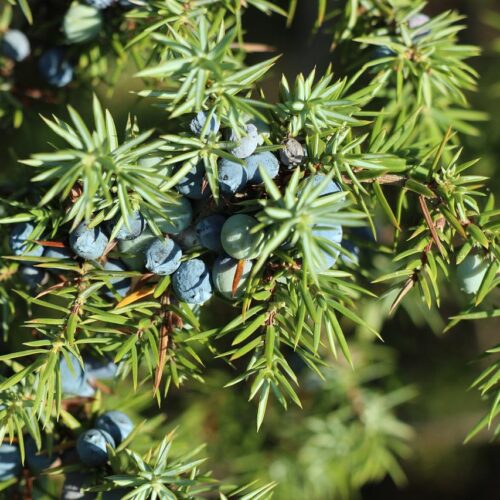 Juniper Berry or Aaraar (Juniperus communis) plant is a member of the Cupressaceae (Cypress family). It is a fragrant and evergreen herb.

Occurring from Western Alaska throughout Canada and Northern USA, in coastal areas of Greenland, Iceland, throughout Europe and in Northern Asia and Japan.

Juniper was once widespread in Europe, except for some low-lying areas around the Mediterranean and it even occurs in small patches of North Africa.

Juniper berries actually aren’t berries at all. They are female seed cones that come juniper plants — a type of conifer (Pinophyta), which is a cone-bearing plant or tree.

Juniper plants vary in appearance and can grow low and wide like a shrub or tall like a tree. Their uniquely fleshy, merged scales make them look like a berry, thus the name.

This was so interesting to read about! I will definitely give this a try! So excited!

Never tried juniper in cooking, love the idea of adding to meats. I will have to try it out.

This is fabulous information thanks for take the time on these berries I had no idea!

I always wondered how to use juniper berry to cook with! Thanks!

You are welcome Heather

This is an interesting article, thank you so much for sharing!