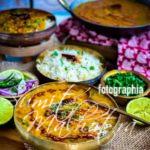 Punjabi Cuisine – Food From the State of Punjab

Punjab is also known as the “Granary of India” or “India’s bread-basket”.

Punjabi Cuisine: The staple food of Punjab is wheat, being an agricultural state. Punjabi cuisine has always been strongly influenced by Mughal invaders who brought with them the tradition of the great tandoor (clay oven) and now Punjabi tandoori cooking is celebrated as one of the most popular cuisine throughout the world.

The local cuisine of Punjab is heavily influenced by the agriculture and farming lifestyle prevalent from the times of the ancient Indus Valley Civilisation.

While those ancient caravan routes from Central Asia to Punjab left their lasting stamp on the Khyber Pass in the Hindu Kush mountain range also became the established route which allowed raiders to enter the subcontinent’s northern frontiers to raid and plunder the region.

Dishes like Sarson Da Saag, Tandoori Chicken, Shami Kebab, Makki di Roti etc. are some Punjabi dishes that rule over the hearts of all food lovers.

Punjabi cuisine is known for its rich, buttery flavours along with the extensive vegetarian and meat dishes. Read more about the Punjabi Cuisine.

To Learn More About Punjab, Click Below for the Books