The Aleppo pepper is a variety of Capsicum annuum used as a spice, particularly in Middle Eastern, and Mediterranean cuisine. It is also known as the Halaby pepper.

It is a robust, brick-red pepper grown in the around the city of Aleppo (Halab in Arabic & hence the name) in northwestern Syria, just south of the Turkish border.

This red spice information card below gives you a snapshot of Aleppo Pepper spice you’ll read about. Do share this spice card with your friends & spread the knowledge.

What exactly is a Aleppo Pepper? 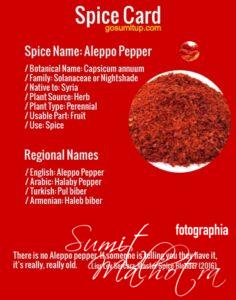 The Aleppo pepper is a variety of Capsicum annuum used as a spice, particularly in Middle Eastern, and Mediterranean cuisine.

It is also known as the Halaby pepper.

Although a common condiment of the region, its use in Europe and the United States outside Armenian, Syrian and Turkish immigrant communities was rare until the 20th century.

The pepper starts as pods, which ripen to a burgundy color, and then are semi-dried, de-seeded, then crushed or coarsely ground.

The Aleppo pepper has a mild “chilliness” or heat which is a moderate heat level of about 10,000 on the Scoville scale.

Botanically, Aleppo chile peppers, botanically classified as Capsicum annuum, are spicy, brightly colored pods that grow on shrubs reaching up to one meter in height.

They are members of the Solanaceae or nightshade family.

Aleppo chile peppers are conical, straight to curved pods, averaging 5 to 10 centimeters in length, and feature deep, vertical indentations across the surface.

The skin of the pod is glossy, smooth, and firm with a waxy consistency, transitioning in color from green, orange, to bright red when mature.

Underneath the surface, the semi-thick flesh ranges from pale red to orange and is crisp, striated, and aqueous.

The flesh encases a central cavity filled with membranes and small, round, cream-colored seeds.

What is the nutrition value of Aleppo Pepper?

Know the nutritional value of Halaby Pepper or Pul biber

Aleppo Pepper is a low fat food because it contains less than 3 grams of fat per suggested serving.

Aleppo pepper similar to red coloured food items is high on carotene and Vitamin A.

Along with Vitamin A, it is rich source of Vitamin C, Folic acid, Potassium, & Manganese.

Vitamin A is known to aid tissues of eyes and improves vision.

They also contain capsaicin that creates the feeling of heat or spice and is believed to have antibacterial and some pain reduction properties when used topically on the skin.

What is the chemical composition of Aleppo Pepper?

Know and understand about chemical composition of Halaby pepper or Pul biber.

The cooking process not only positively affects the phenolic profile of pepper samples but also the colour, total phenolic content, and antioxidant activity.

What is the history of Aleppo Pepper?

Chile peppers are native to South America and were brought to Europe with Spanish and Portuguese explorers returning from voyages to the New World.

As the plants were introduced to Spain and Italy, they were quickly spread across the Mediterranean Sea to Turkey and Syria. Many new varieties of peppers were created in cultivation.

The town of Aleppo, Syria is considered to be one of the oldest inhabited cities in the world.

Aleppo sits along the famed Silk Road that once stretched from North Africa and traveled east through Arabia, Persia, and China.

Along this trade route, spice was used as currency and traded for other goods dating back as far as 200 BCE.

Aleppo chile peppers were developed in Aleppo, which is a town along the Syrian border next to Turkey, and gained global popularity in 1994.

It was grown by Christian and Muslim Arab farmers, possibly nurtured by Sephardic Jewish spice merchants, and traded along the Silk Road.

Since the Syrian civil war broke out in the spring of 2011, chile crops have been destroyed, and many farmers have had to leave their crops.

In an effort to keep the variety in the markets, some farmers moved their production into southern Turkey.

For centuries, the halaby pepper has been used to season kebabs, stews, and sauces.

What is the the taste of Aleppo Pepper?

With its high oil content, this dried, seeded and crushed red pepper has a deliciously deep, aromatic flavor, somewhat similar to Ancho chili powder but with a coarser, flakey texture.

Aleppo pepper have a medium level of heat, a distinctive fruitiness with earthy flavor and hints of cumin.

Pul biber flavour can be further described as that with a little more tartness, sweet, rich and almost a robust smoky flavour.

The slightly salty quality that Aleppo pepper has comes due to its drying process with salt.

It hits you in the back of your mouth, tickles your throat and dissipates quickly.

What are the uses of Aleppo Pepper?

Know more about how to use Aleppo Pepper or Halaby Pepper.

Aleppo chiles can be used in both raw and cooked applications such as roasting or grilling. They are usually dried and ground into a spice for Mediterranean and Middle Eastern cuisines.

How long does Aleppo Pepper last?

Learn about how long does Halaby Pepper last in storage.

The peppers will keep up to one week when stored whole and unwashed in the refrigerator.

How do I store Aleppo Pepper?

Learn about how to store Aleppo Pepper or Kalpasi.

For the best results, keep it stored in an airtight container in the refrigerator drawer as usual. You can also store it as you would other spices in a dark, dry space away from heat.

What can I use Aleppo Pepper for?

Learn how to use Kalpasi or Halaby Pepper in your food & beverages.

Is there a substitute for Aleppo Pepper?

If you can’t find Aleppo pepper, you can substitute a mixture of Hungarian sweet paprika and cayenne pepper.

Make sure to not go overboard with the cayenne—just a small pinch should be plenty. If you don’t have either of these spices, crushed red pepper works as a substitute in a pinch.

Where do I buy Aleppo Pepper from?

Where to Locate Aleppo Pepper in the Grocery Store?

Aleppo pepper will probably not be available at your standard grocery store, but it’s readily available online from retailers such as Amazon.

What are the health benefits of Aleppo Pepper or Halaby Pepper?

Learn about health benefits of Aleppo Pepper or Capsicum annuum

Sumit Malhotra
Aleppo Pepper Substitute - Aleppo pepper is known for its earthiness with hints of raisin and tomato so it is essential to balance their flavours out in the created substitute. Here is the recipe in case you are unable to find aleppo pepper locally.
Print Recipe Pin Recipe
Prep Time 5 mins
Total Time 5 mins
Course Condiment
Cuisine Mediterranean
Servings 3 Serving
Calories 5 kcal

The Aleppo pepper is a variety of Capsicum annuum used as a spice, particularly in Middle Eastern, and Mediterranean cuisine. It is also known as the Halaby pepper.

It is a robust, brick-red pepper grown in the around the city of Aleppo (Halab in Arabic & hence the name) in northwestern Syria, just south of the Turkish border.

This red spice information card above gives you a snapshot of Aleppo Pepper spice you’ll read about. Do share this spice card with your friends & spread the knowledge.

All About Galangal | Know Your Spice Greater Galanga (Alpinia...

All About Dill | Know Your Spice Sowa or Soya...

All About Mint | Know Your Spice Pudina or Peppermint...

All About Cassia | Know Your Spice Jangli Dalchini (Cinnamomum...

All About Barberry | Know Your Spice Zereshk (Berberis vulgaris)

All About Star Anise | Know Your Spice Star Anise...

All About Long Pepper | Know Your Spice Indian Long...

All About Loomi | Know Your Spice Dried Lime (Citrus...

All About Achiote | Know Your Spice Annatto (Bixa orellana)

Hey Fit.Digital(@myFitDigital), thank you for following me

Encyclopedia of Spices - The simplest #spice #recipes are compiled in this encyclopedia board. It is extremely easy to incorporate them in your #diet. pin.it/5zyqh2J via @Pinterest #food #foodie #spices #health #vegan #vegetarian #encyclopedia #online

All About Hyssop | Know Your Spice Jupha...

All About Galangal | Know Your Spice Greater...

All About Dill | Know Your Spice Sowa...