Chiang Mai Night Safari – A Great Park to Be In 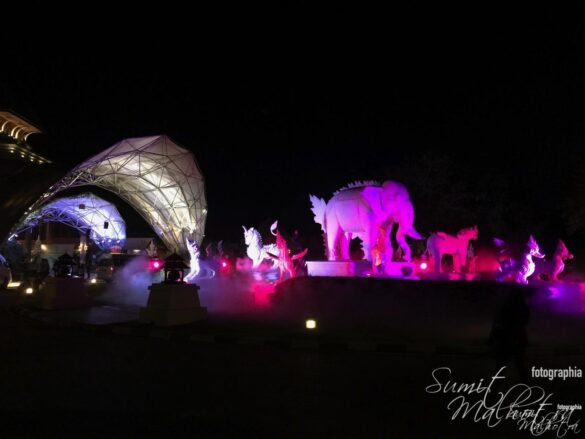 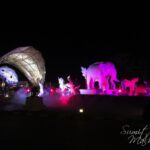 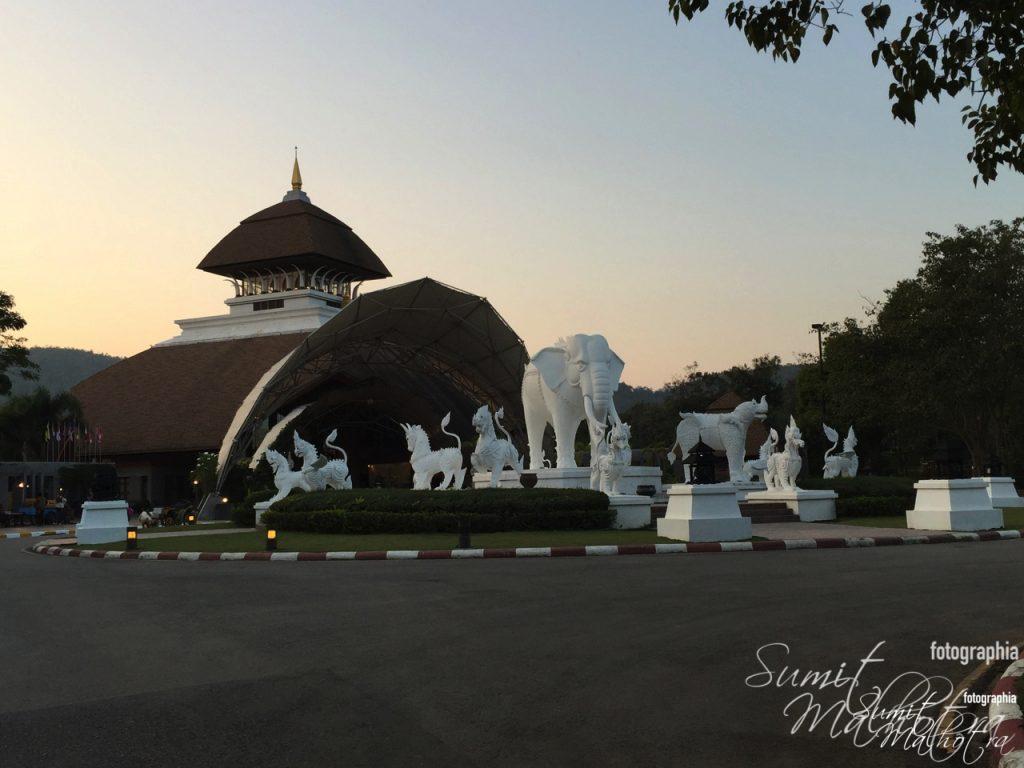 After spending a few hours at The Royal Flora, I went to The Chiang Mai Night Safari. It is right net door technically. It draws its inspirations from the Singapore Night Safari. The concept of the safari centre is to provide visitors with a thrilling experience similar to being out in the wilderness at night. Apart from this, there is a range of activities and dance & light shows that keep you entertained throughout your visit. There is a Tiger Show as well.

There are abundant food stalls and a restaurant that churns out freshly made and delicious food. One of the big downsides is that it is a bit expensive, 3x than the Thais. Though, if your lodging has a relationship with them, you can get a substantial discount too. So, please check before you book. 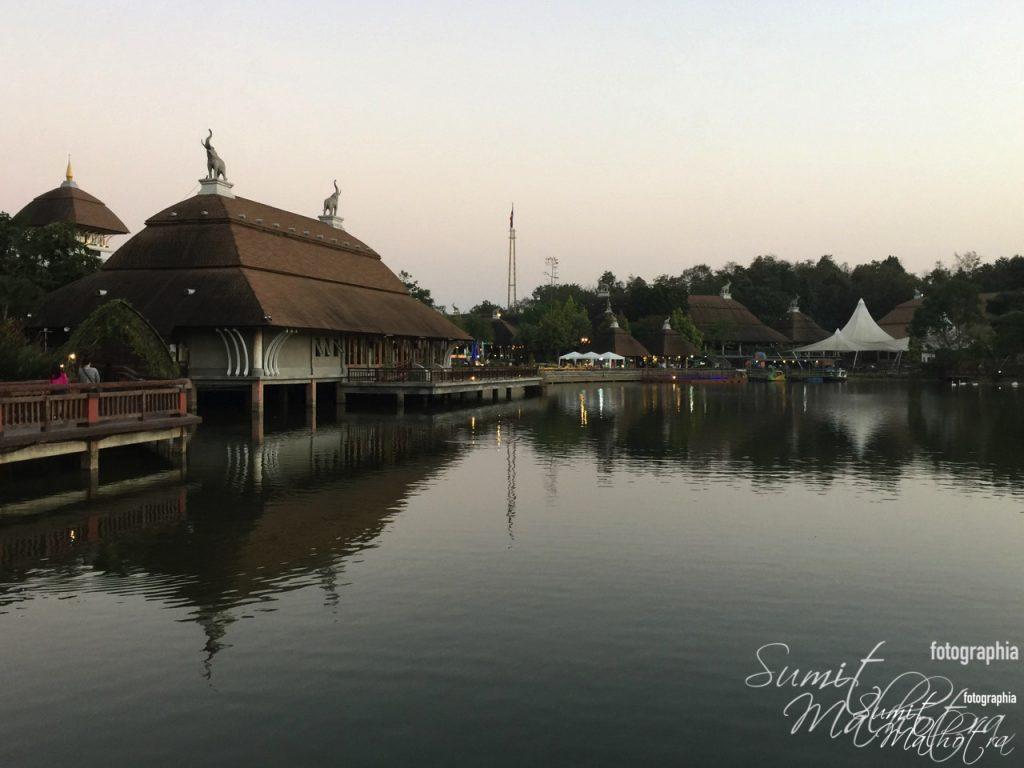 The lake at the safari

The Chiang Mai night safari opened in 2006 in the same year with the Royal Flora Expo 2006 in order to promote Chiang Mai tourism. It is the second night safari of the world modelled on the Night Safari in Singapore. I had missed this one during my Singapore trip, so it was my first night safari really.

The 320-acre site, annexed from the foot of the Doi Suthep–Pui National Park, includes a large lake surrounded by zoo-like enclosures and two ‘game drives’, where animals from Africa and Asia roam freely in larger fenced off areas. Some of the more docile species wander right up to the tram, but predators are kept behind security barriers. 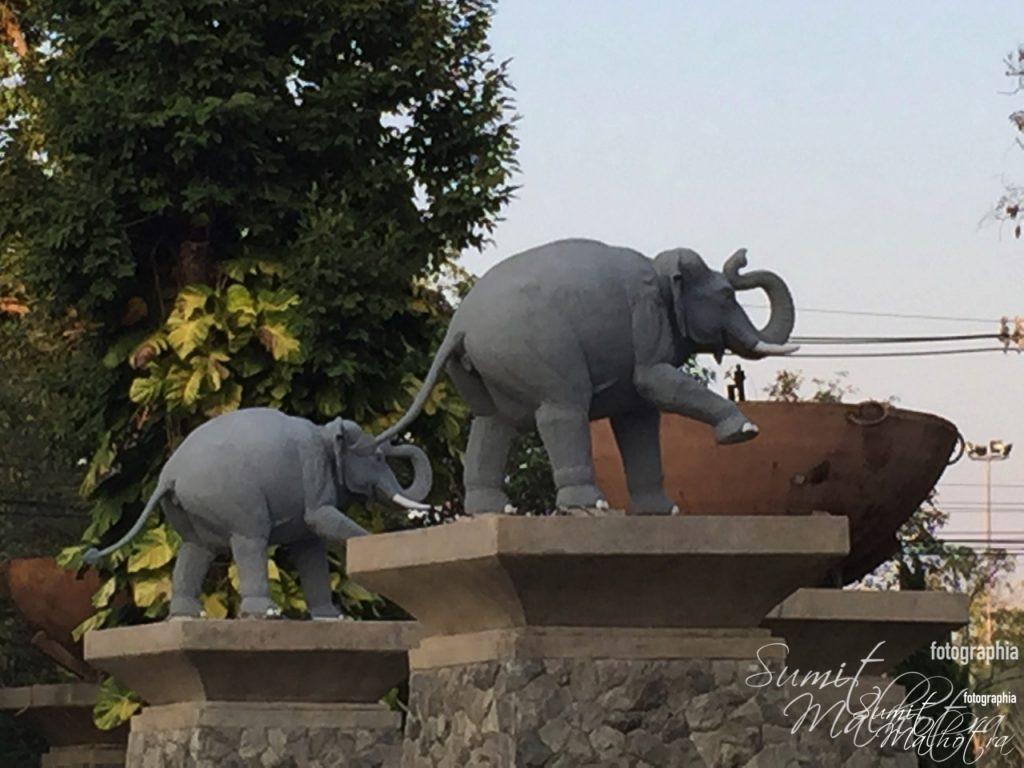 The Walk on the Jaguar Trail Zone

A great zoo and experience that I highly recommend when visiting Chiang Mai. I went there around 5 PM and left around 9:30 PM. First, I walked the walking trail in the 1.2 km Jaguar Trail Zone around the Swan Lake.

At one point in time, I heard the tigers roaring loudly. On the other hand, there were some ducks and other birds flapping their wings as if they were about to be feasted upon. The jaguar trail is super spooky at night time. I advise going in groups rather than solo. Overall, the surroundings were well thought through, inviting & clean. 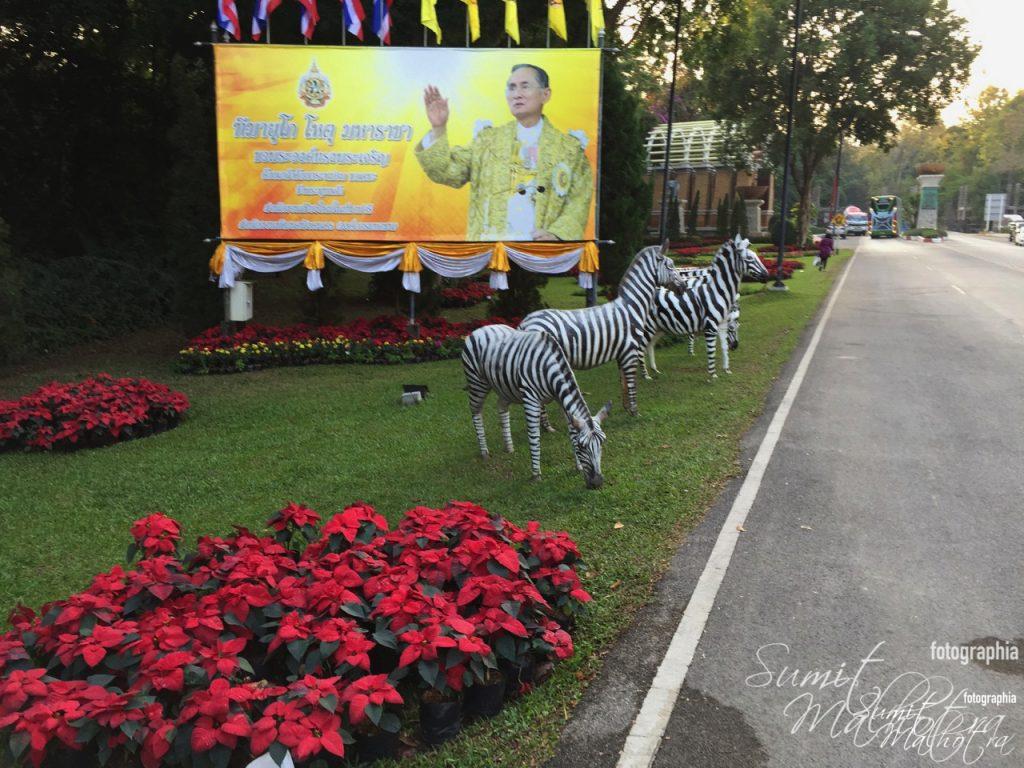 Road to the main entrance

After the walk, I watched the Tiger Show at 6 PM. Some of the tigers are trained to do “cute” things like dance, trot or beg for treats. This is definitely not a wildlife preserve, but more of an animal show.

I felt that the Tigers were in distress just like it happens in a circus. They were anxiously circling the enclosures and bearing their teeth. Then in a second, they were doing a stupid Gangnam style dance which I thought was cruel and terrible to watch. Then they were made to perform more tricks, like jumping through hoops etc. This was a bit of a downer. 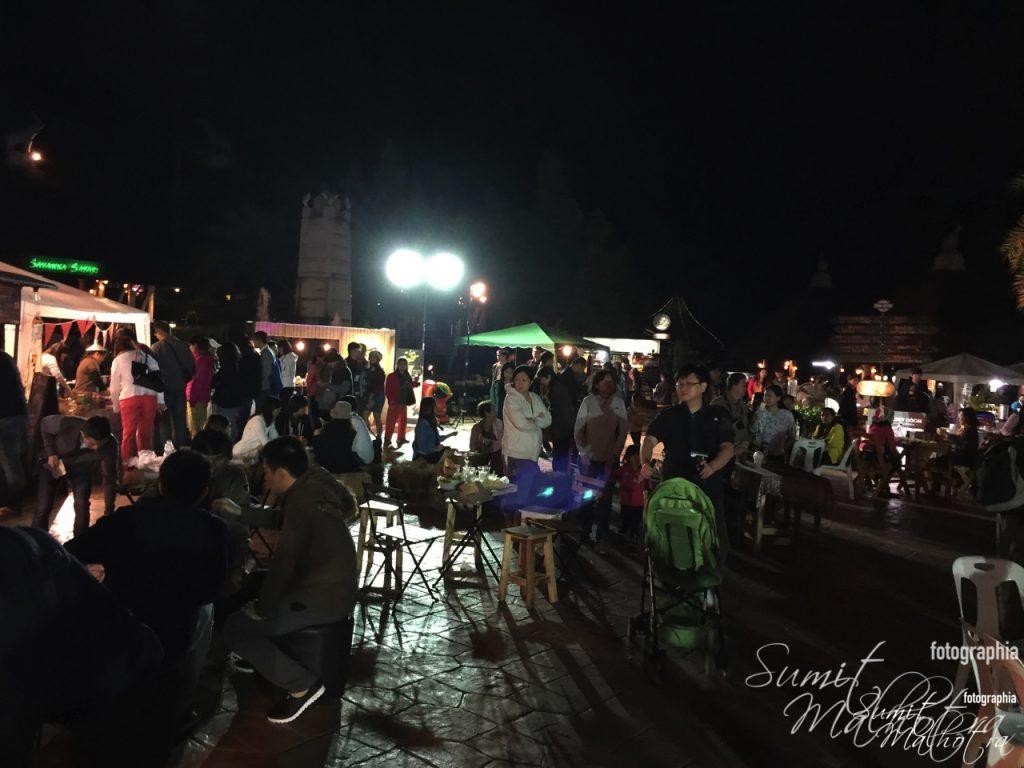 After the show, I took the next available tram to go around the safari. There are two tram tours – North & South called the Savanna and Predator Prowl zones. Together they last for about forty minutes. I missed the Southern tram tour due to language differences. It was announced in Thai and some broken English and the confusion got it missed after the North tram. So if you are visiting the Night Safari, ensure you get this bit right.

The guides stop the tram at every exhibit and tell you about each animal. Their English is pretty good and the content was also pretty funny and informative. If you’d like to hand feed them (food is cheap), ensure you buy some fruits and all before you board the tram. 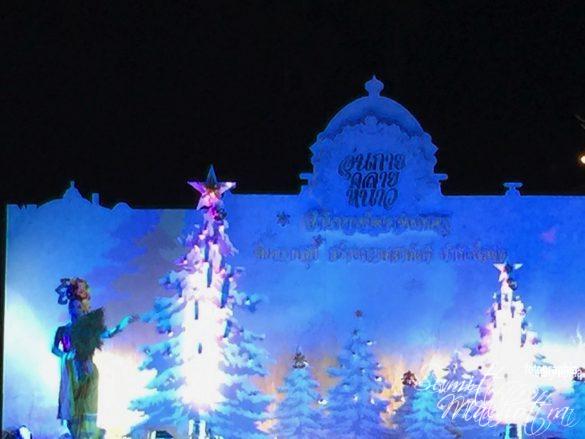 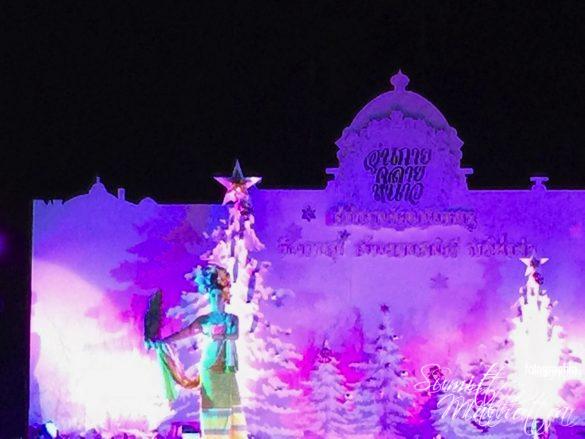 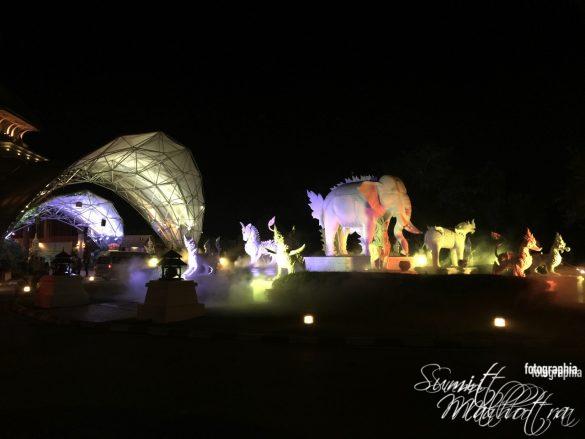 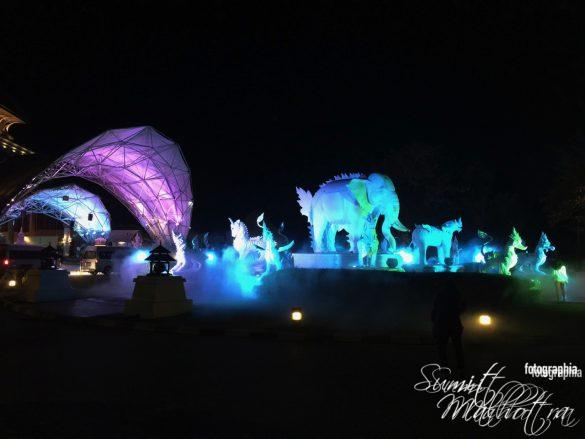 After the tram tours, there is an interesting dance show performance by beautifully decked up ladyboys wearing elaborate “Las Vegas” kind of costumes.  The same is followed by a light & water-laser show. Both the shows are spectacular. Do not miss them. 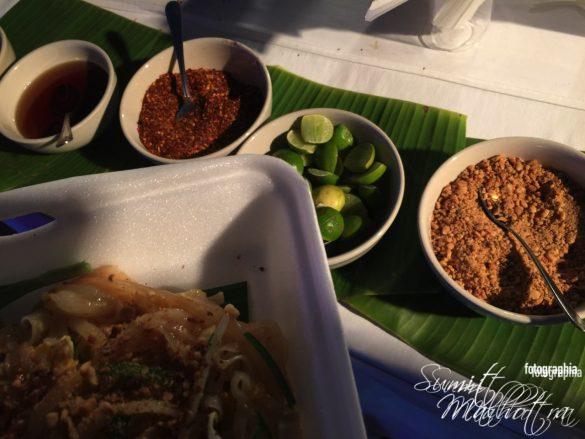 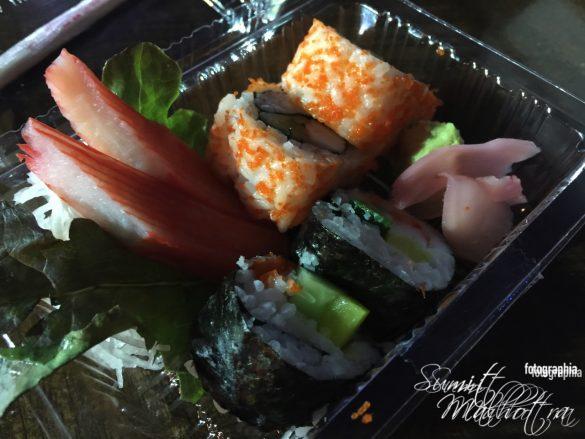 A Box of Sushi 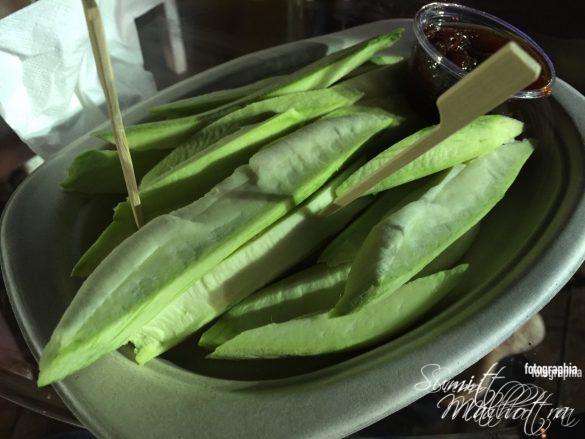 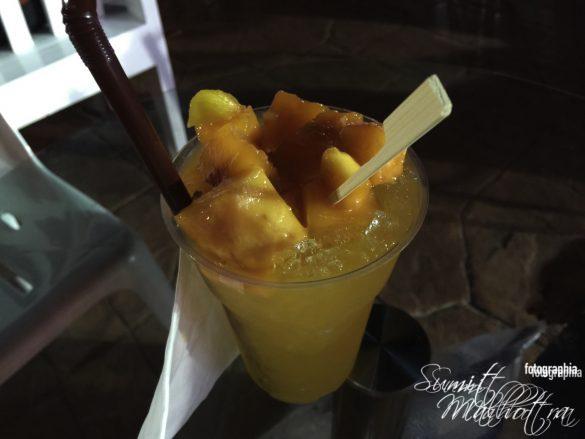 The food at the night safari is really fresh and delicious. You can choose from eating at the stalls at the gathering area or you can even dine at their restaurant that serves a buffet as well as ala carte dishes. I opted for a freshly made Pad Thai, A box of Sushi, Mangoes and a Mango Dessert which was like a drink.

A very nice place, highly recommended. The only bummer about the Night Safari is that it is too dark to take any good quality pictures except for the dance, light & water-laser show.