Sesame Seeds (Sesamum radiatum) is also known as Til in Hindi, Ellu in Tamil, Nuvvulu in Telugu and Tila/ Raashi in Oriya. 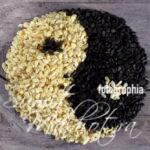 Sesame Seeds, Safed Til, Kala Til

Health Benefits of Sesame Seeds | Benefits of Til – Sesame seeds are small, even oval seeds and these seeds come in different colours, depending upon the variety, including white, yellow, black and red. Sesame seed is considered to be the oldest oilseed crop known to humanity.

Sesame seeds are highly valued for their high content of sesame oil, oil that is very resistant to rancidity. Sesame seeds were one of the first crops processed for oil as well as one of the earliest condiments.

Archaeological remnants suggest sesame was first domesticated in the Indian subcontinent dating to 5500 years ago. Charred remains of sesame recovered from archeological excavations have been dated to 3500-3050 BC.

Historical evidence supports trading of sesame between Mesopotamia and the Indian subcontinent occurred around 2000 BC. It is possible that the Indus Valley Civilisation even exported sesame oil to Mesopotamia.

Currently, the largest commercial producers of sesame seeds include India, China and Mexico.

What are the uses of sesame seeds?

Til or Sesame seeds are full of zinc, copper, calcium, vitamin B1, magnesium and dietary fibre.

These seeds offer the most nutritional value when the entire un-hulled kala til seed is used instead of safed til. Sesame oil is non-drying oil, rarely turning stale in hot climates.

It is very rich in protein & a polyunsaturated fat used in for cooking. Non-culinary uses include – an ingredient in soap, cosmetics, lubricants and medicines. In Southern India it is used to daub the body and hair.

What is the Difference Between Black Sesame and White Sesame Seeds?

Culinary Applications of Til or Sesame Seeds

Sesame or Til seed is a common ingredient in various cuisines. It is used whole in cooking for its rich, nutty flavour. Sesame or til seeds are sometimes added to breads, including bagels and the tops of hamburger buns. They may be baked into crackers, often in the form of sticks.

In Asia, sesame seeds are sprinkled onto some sushi-style foods. In Japan, whole seeds are found in many salads and baked snacks, and tan and black sesame seed varieties are roasted and used to make the flavouring gomashio.

East Asian cuisines, such as Chinese cuisine, use sesame seeds and oil in some dishes, such as dim sum, sesame seed balls and the Vietnamese bánh rán.

Sesame flavour (through oil and roasted or raw seeds) is also very popular in Korean cuisine, used to marinate meat and vegetables. Chefs in tempura restaurants blend sesame and cottonseed oil for deep-frying.

Sesame seeds and oil are used extensively in India. In most parts of the country, sesame seeds mixed with heated jaggery, sugar, or palm sugar is made into balls and bars similar to peanut brittle or nut clusters and eaten as snacks.

In Manipur, black sesame is used in the preparation of chikki and cold-pressed oil. In Assam, black sesame seeds are used to make til pitha and tilor laru (sesame seed balls), as well as used with meat to cook til mangko during bihu.

In Punjab and Tamil Nadu, a sweet ball called pinni in Urdu and ell urundai in Tamil, ellunda in Malayalam, yellunde/chigali, (sesame ball, usually in jaggery), is made of its seeds mixed with sugar. It is eaten in various forms during the festival of Makar Sankranti.

Sesame oil is used extensively in the cuisine of Tamil Nadu. Milagai podi, a ground powder made of sesame and dry chilli, is used to enhance flavour, and is consumed along with other traditional foods such as idli.

In Tamil Nadu and Andhra Pradesh, sesame oil is used as a preservative and to temper the heat of their spicy foods, pickles, and condiments.

Sesame is a popular and essential ingredient in many Middle Eastern cuisines. Sesame seeds are made into a paste called tahini (used in various ways, including hummus bi tahini) and the Middle Eastern confection halvah.

Ground and processed, the seed is also used in sweet confections. Sesame is also a common component of the Levantine spice mixture za’atar, popular throughout the Middle East. 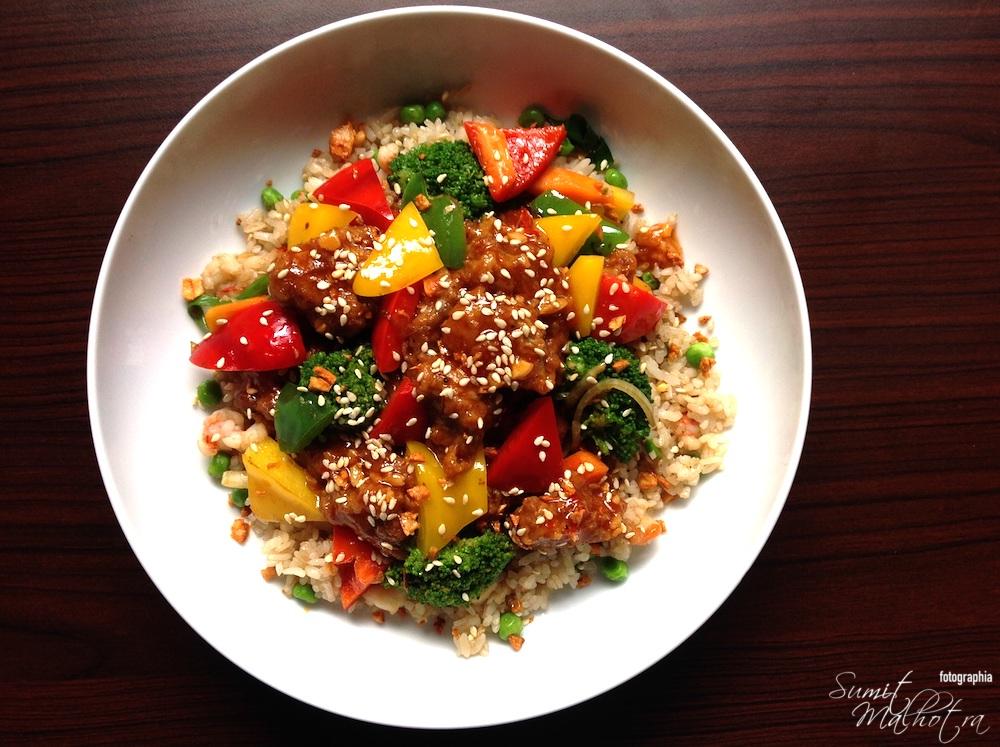 What are the Health Benefits of Sesame Seeds or Til 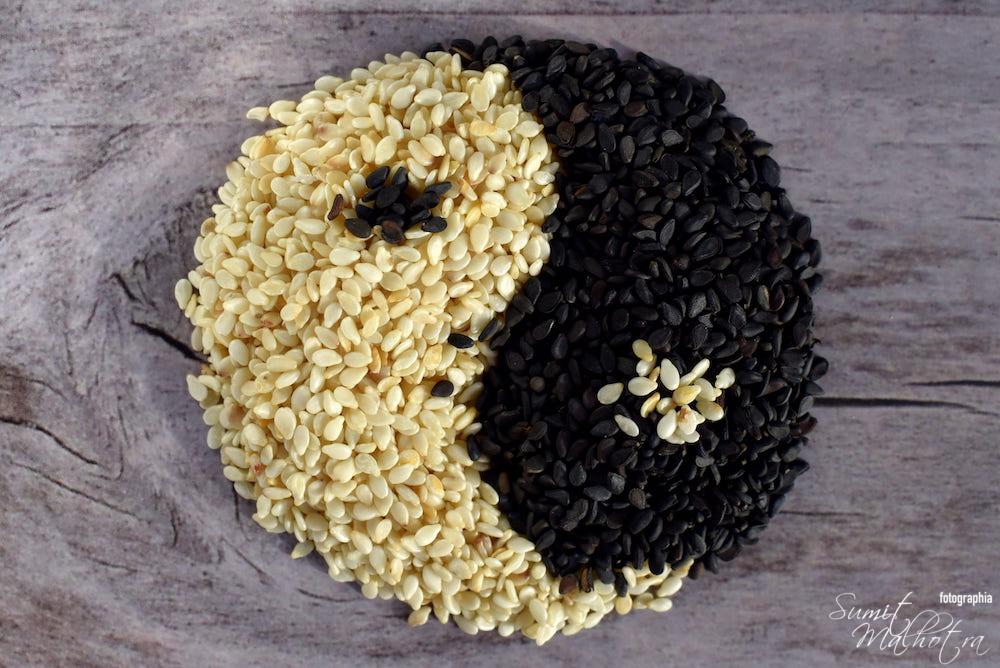 Sesame Seeds, Safed Til, Kala Til 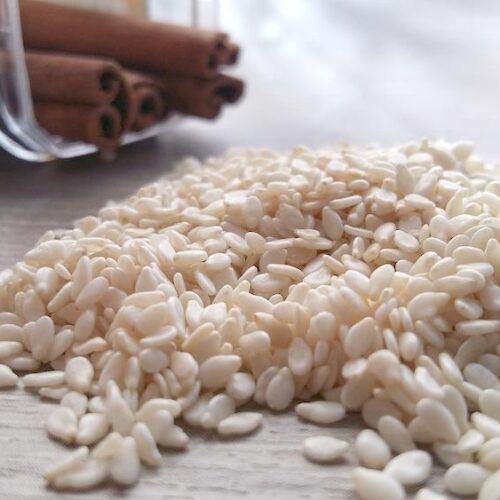 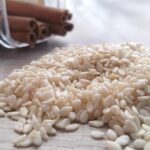 Health Benefits of Sesame Seeds or Til

Health Benefits of Sesame Seeds – Til or Sesame seeds are full of zinc, copper, calcium, vitamin B1, Vitamin E, magnesium and dietary fibre.

These seeds offer the most nutritional value when the entire un-hulled kala til seed is used instead of safed til. As a result health benefits of sesame seeds are significant.

Sesame oil is non-drying oil, rarely turning stale in hot climates. It hence forms the basis of most of the fragrant or scented oils. The refined version of sesame oil is also used for salad dressing.

If you like this article, you can let us know in the comments below or on social media using #gosumitup and tag me @gosumitup. I am always happy to read your feedback.

And, if you liked the dish or if you made the dish, better still, take a picture and post it on Instagram and tag as #gosumitup

All About Marjoram | Know Your Spice Marwa (Majorana hortensis)

All About Juniper Berry | Know Your Spice Aaraar (Juniperus...

VERY IMPRESSED WITH YOU SHARING YOUR DEEP KNOWLEDGE AND YOUR EXCELLENT DISCRIPTION OF TIL… QUALITIES AND IT’S POSSITIVE EFFECTS ON OUR BODY, SPECIALLY DURING THE PRESENT CORONA VIRUS PANDEMIC.
COULD YOU PLEASE LET ME KNOW THE QUALITIES OF KALA TIL & SAFED ( WHITE) TIL. PLUS WHICH IS BETTER FOR US IN THE PRESENT SITUATION.
THANK YOU….. COL S. S. SINGH

Dear Colonel Singh, Thank you very much for your comment. Really appreciate it. As per your question safed til is a hulled version of black sesame. Unhulled black sesame proportionately have a higher concentration of fibre & minerals. Their use however is more for baking and oil since the flavour of black sesame is slightly bitter than the white counterparts. However, you can try and use either of sesame seeds a few times in a week even it is simply by garnishing your dishes with them or by simply using sesame oil. It works wonderfully with fish as well as potatoes. After receiving your question, I have also incorporated a section differentiating black seeds from white ones in this post as well.

All About #Saffron | Know Your Spice #Kesar (Crocus sativus L.) gosumitup.com/all-ab… via @sumitmalhotra

@TataSky Hi Vishal ... I am not subscribed to tata sky services. That’s what makes it even more harassing.

All About Sage | Know Your Spice Salvia...

All About Saffron | Know Your Spice Kesar...

All About Rosemary | Know Your Spice Rusmari...