Learn How to Make Falafel? An inspired Middle Eastern Falafel recipe that is easy & delicious. 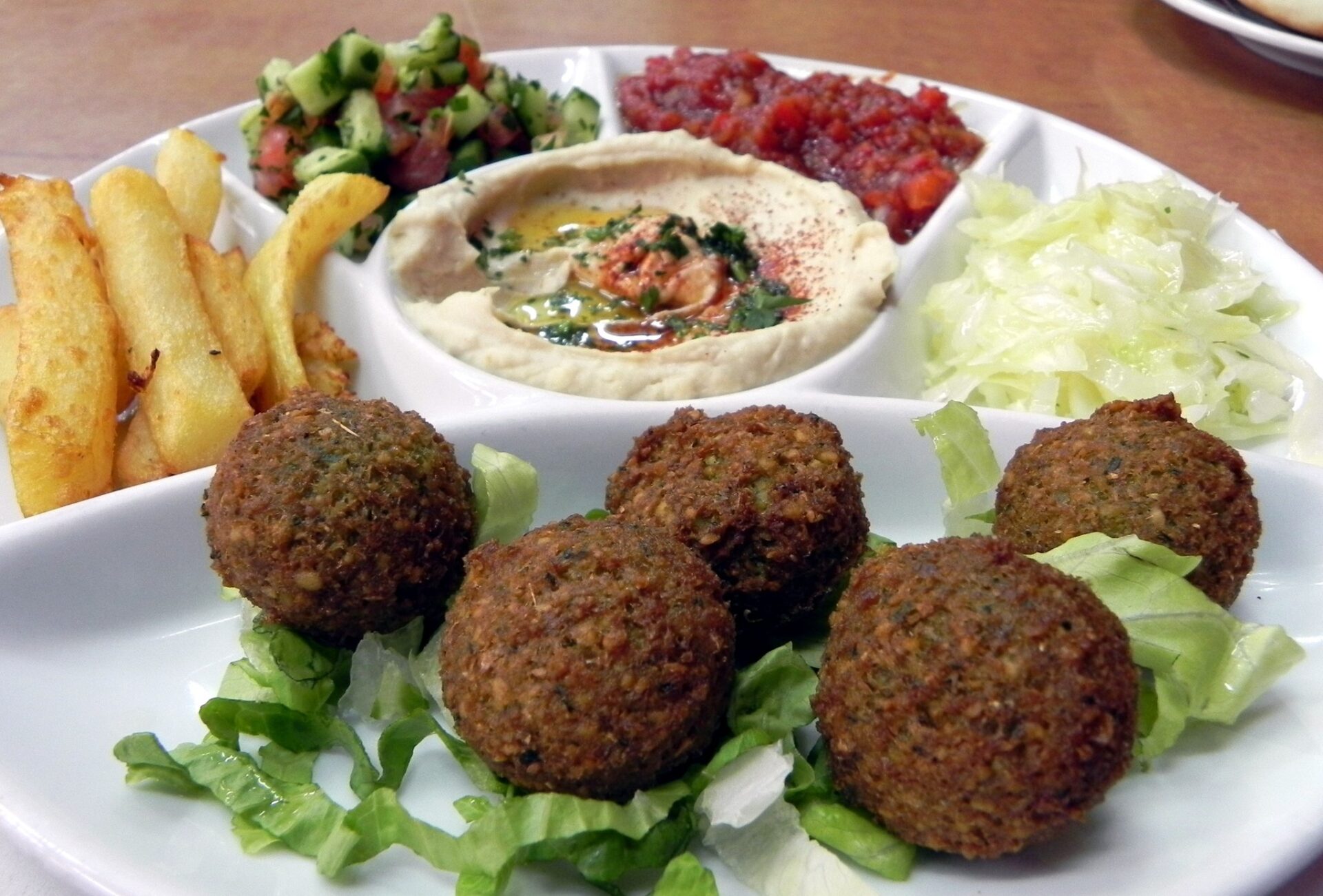 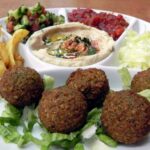 Falafel | how to make falafel recipe

Falafel is a popular Middle Eastern “street fast food” or a snack made with a mixture of chickpeas, fresh herbs, and spices. This mixture is then formed into a small patties or balls and deep fried.

The idea is to get the homemade falafel balls crunchy on the outside, but not oily on the inside.

Falafel is one of those Mediterranean snacks that have now become a very popular vegan snack all over the world.

Falafel continues to be the people’s daily fare in the Middle East & Mediterranean. You can find it from street vendors in almost every neighbourhood.

It’s often served in a sandwich form with pita pockets and a generous drizzle of hummus and loads of fresh salad of such sliced tomatoes, pickles and pickled turnips.

In this article hide
1 Falafel - The Perfect Homemade Falafel Recipe
2 Is Falafel Healthy?
3 What is the history behind Falafel?
4 How to Make Falafel?
5 What goes into Falafel?
6 Homemade Falafel Recipe | How to make falafel at home?
7 Tools & Equipment Used For This Recipe
8 Variations for Falafel or falafel
9 Options for Traditional Falafel
10 Serving Suggestions for Falafel
11 Versatility of Falafel Filling
12 Can I Freeze Falafel?
13 FInally! To Sum It Up
14 STAY CONNECTED

Find out about the nutritional value of homemade falafel

Falafel are little gold balls, made from soaked chickpeas, parsley, garlic and spices. Chickpeas are full of plant-based protein and fibre.

One cup of canned chickpeas contains 265 calories, 4 grams of fat, 15 grams of protein and 12.5 grams of fiber. There are also significant amounts of B-vitamins and minerals including iron, magnesium, potassium and zinc.

What is the history behind Falafel?

Who invented the falafel?

While the exact origins of falafel are unknown, there are many popular theories. Most of these theories agree that falafel was developed in Egypt. However, the subject of when and by whom is rather contested.

Some contest that it dates back about 1,000 years to the Egyptian Copts, who brought it with them from the Middle East. The the Copts invented the food as a meat-free option to enjoy over Lent during the time of the pharaohs, but there is little evidence to back up this claim.

‘Falafel’ is not a Coptic word, and it more likely came from Alexandria. The port city saw sailors bringing fava bean (original recipe) patties home, subsequently increasing their popularity throughout the Mediterranean.

It is contested that falafel first emerged in Alexandria, the principal port of Egypt and the city with the largest concentration of European troops.

Others say that falafel got routed from India in the 6th century. Falafel references began cropping up in Egyptian literature following the British occupation of the country.

British officers had enjoyed fried vegetable croquettes during their time in India and made their Egyptian cooks to prepare the dish upon returning home.

Some Jews point out that no single group can own a method for frying a mush of legumes; they say that falafel is generically Middle Eastern, having originated in Egypt and found its way as far as Morocco and Saudi Arabia.

However, Israel is perhaps the most steadfast in its claim over falafel, even advertising it as one of their national dishes and putting it into songs.

But many Palestinians believe that Israelis have stolen falafel, a traditional Arab food, and passed it off as what postcards at tourist kiosks all over Israel call ”Israel’s National Snack.”

This contest will have no ownership resolve, just as even now the Turks and Greeks have feud over coffee.

How to Make Falafel?

Here is an easy way to make falafel.

Falafel is crunchy on the outside and light and crumbly on the inside. You may use cooked or canned chickpeas as well rather than uncooked chickpeas. But cooked and canned peas will make them into a paste so best avoided.

While falafel are best served as balls, you can also flatten the balls into patties to be stuffed in a pita pocket. Patties are easier to deep fry as well. For a healthier version, you can bake them! 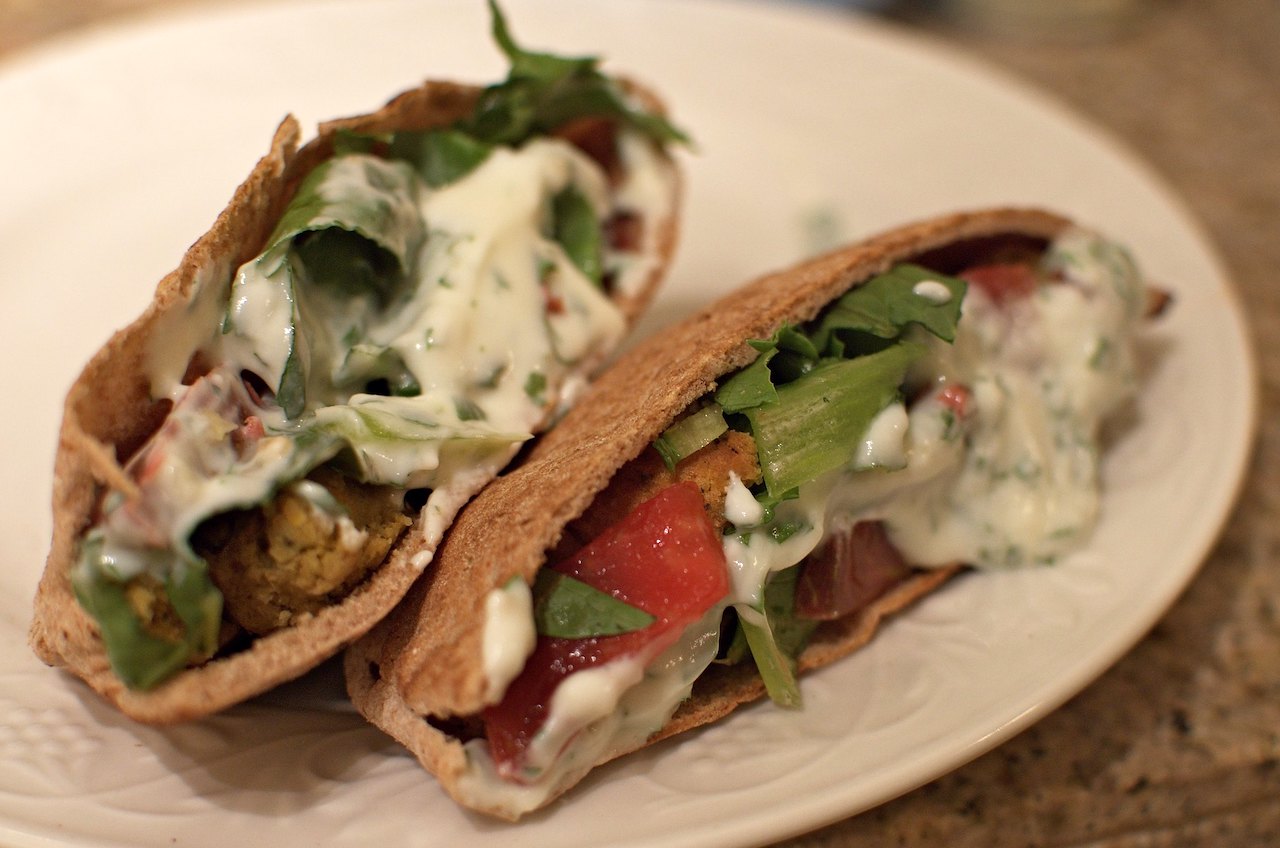 Falafel is all about one special legume – chickpeas! Balls made from heavily spiced mashed chickpeas are fried golden and served with sauces like hummus or muttabal or labneh made using tahini or yoghurt.

Falafel are typically flavoured with warm, earthy spices like cumin and coriander but falafel can also be flavoured with fresh herbs, garlic, onion, cayenne pepper and red pepper flakes.

You’ll also need a raising agent, whether bicarbonate of soda or baking powder, to make your falafel extra fluffy. A binding agent like flour and in some cases eggs may also be used.

What goes into Falafel?

What are the ingredients for Falafel?

Legumes – Chickpeas or fava beans (Vicia faba, Broad beans). Both of these are loaded with nutrients and may offer impressive health benefits.

Making falafel with fava beans is common in some Middle Eastern countries, and then there are recipes that combine chickpeas and fava beans.

Vegetables – You can add onion, shallots, chives, garlic and ginger to suit your tastes. The falafel are pretty forgiving and allow you to be creative.

Herbs – Parsley is popular but so is coriander, ground coriander and cumin are also pretty much a given. You can add ginger & garlic and some recipes use cayenne pepper, paprika or chilli flakes too.

Pita Bread – If you are making a falafel sandwich you can use pita bread to roll them into or you can even stuff falafel in a pita pocket.

Oil – The traditional way of cooking falafel is deep frying it in a neutral oil such as canola. 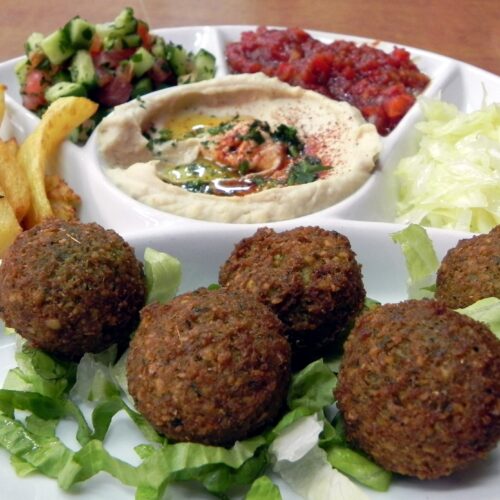 Homemade Falafel Recipe | How to make falafel at home?

For preparing the mixture
Buy Now

Variations for Falafel or falafel

Lentils – Use lentils to make falafel instead of chickpeas. As with chickpeas, be sure to soak them for 24 hours in plenty of water. When they are soft, remove excess water and then follow the steps of making traditional falafel.

Meat – Substitute a cup of raw minced beef for a cup of chickpeas and then follow the steps of making traditional falafel.

Baking – A healthier option is to bake the falafels in the oven instead of frying. Simply follow the steps of making traditional falafel and instead of frying them, place them on a metal tray, covered with absorbent paper, and bake them for 20 to 30 minutes until they are golden brown. Remember to turn them so they cook evenly.

A falafel is an anytime and all time favourite in the Middle East & Mediterranean. Some serving or eating suggestions for falafel follow below:

What are more options for filling this sandwich?

Simply stating, you can add in any vegetable you can eat raw into the filling. The most commonly used vegetables are onions, bell pepper (capsicum), carrots, cabbage, steamed sweet corn, steamed green peas, cucumber and tomatoes.

You can even add roasted red peppers, grated boiled beetroots, or roasted eggplants to this filling. If you are someone who likes spicy falafel sandwiches, you can even add chopped green chillies & radish to the filling.

Can I Freeze Falafel?

Can falafel be frozen?

Falafel | how to make falafel recipe

Falafel is a popular Middle Eastern “fast food” or a snack made with a mixture of chickpeas, fresh herbs, and spices. This homemade falafel recipe mixture is then formed into a small patties or balls and deep fried.

Falafel pita pocket are a good breakfast to start your day & that is the answer for is falafel healthy?

The idea is to get the falafel balls crunchy on the outside, but not oily on the inside.

Falafel is one of those Mediterranean snacks that have now become a very popular vegan snack all over the world.

Falafel continues to be the people’s daily fare in the Mediterranean. You can find it from street vendors in almost every neighbourhood.

It’s often served in a sandwich form with pita pockets and a generous drizzle of hummus and loads of fresh salad of such sliced tomatoes, pickles and pickled turnips.