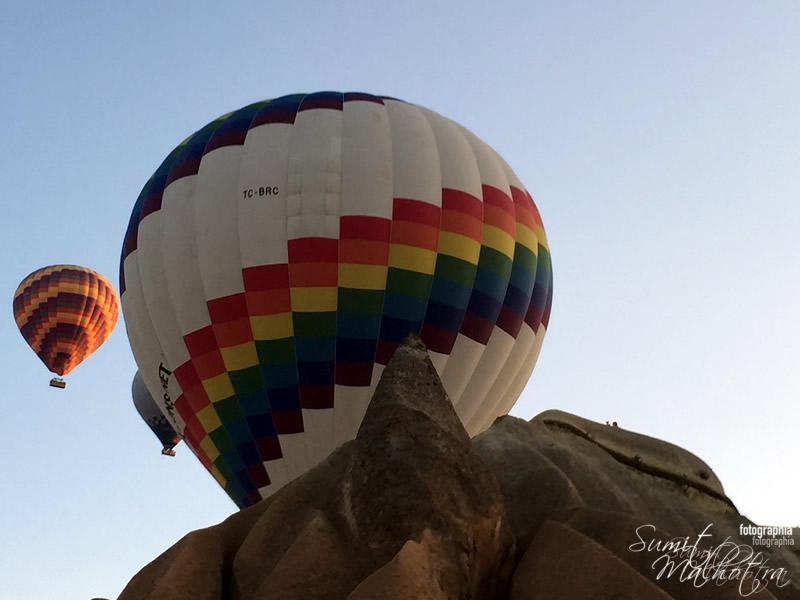 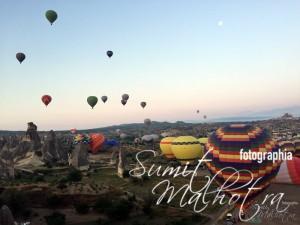 Cappadocia‬, Turkey is famous globally as one of the best places to fly in a hot air balloon‬. If you have not gone “Hot Air Ballooning in Cappadocia“, you have not really visited Cappadocia. It is amongst my top 11 things to do in Cappadocia. The spectacular ‪landscapes‬ combined with excellent flying conditions allow the balloons to gently drift over and between ‪fairy chimneys‬. You see ‪‎rock formations‬ and impressive ‪valleys‬ giving a breathtaking view of the region.

Hot Air Ballooning in Cappadocia, Turkey gives you the opportunity to see, smell and soak up the Cappadocian landscape on an entirely new level. It gives perspective to the environment & offers a great element of adventure. Hot air ballooning in Cappadocia is both serene and thrilling, offering amazing views and a feeling of freedom which is totally unique. 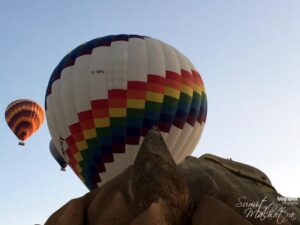 Hot Air Ballooning in Cappadocia starts early. We were picked up by the Ürgüp Balloon Company’s pickup van at sharp 4 AM in the morning for their standard flight. There are longer and more private options for Hot Air Ballooning in Cappadocia too. We regrouped with other ballooners at Ürgüp Balloon Company’s office. Here, a sumptuous feast of cookies, cakes and other snacks with Tea & Coffee awaited us. Having refreshed ourselves, we filled in the mandatory information forms and made our payments.

The ground transport took us to the take off site in Goreme National Park. The place was abuzz with activity. Some hundreds of balloons were being prepared. We were ushered to our balloon where we were greeted by our pilot “Mehmet Üzümcü“. In all, we were 16 people in the balloon. Mehmet proceeded to explain the ride and the landing procedure to us.

The balloon took off with numerous sighs upon the beauty of the landscape that we were witnessing. As the balloon cruised Mehmet explained the landscape to us. As the Sun rose the valleys started shimmering in the sunlight. The morning colours were captivating. We climbed to almost 900 – 1000 feet and floated carefreely. The flight was almost one hour ten minutes and we savoured the ethereal beauty of the Red Valley, Uchisar Palace and Fairy Chimneys.

The flight ended with a thud – Mehmet was unable to land on the motorised carriage as is customary and landed on the ground instead. However, no harm was done. There was a Champagne celebration at the end of the flight and we were given certificates of flight for hot air Ballooning in Cappadocia. We were back in our hotel by 6:45 AM. An amazing way to start a day :)

To Sum-It-Up: Hot air ballooning in Cappadocia is an awesome adventure. The shared flight for hot air balloons starts at Euro 150 I was told. The package includes pickup from and drop to the hotel, a basic breakfast really early in the morning (cookies, croissants, muffins, tea/coffee), the “Flight”, a post flight celebration with Champagne closure and a Certificate of Flight.

While I was travelling through the region, I was approached by a local shopkeeper in Uchisar who offered me a deal at 85 Euros. I spoke with my hotel hosts who incidentally run a ballooning company too in Cappadocia. Without much negotiation, they sweetened the deal to 75 Euros. It was a good bargain @ a 50% discount .. In my opinion, it’s a good idea to fish to land the best rates.

Enjoy the video and the photos of Hot Air Ballooning in Cappadocia, Turkey 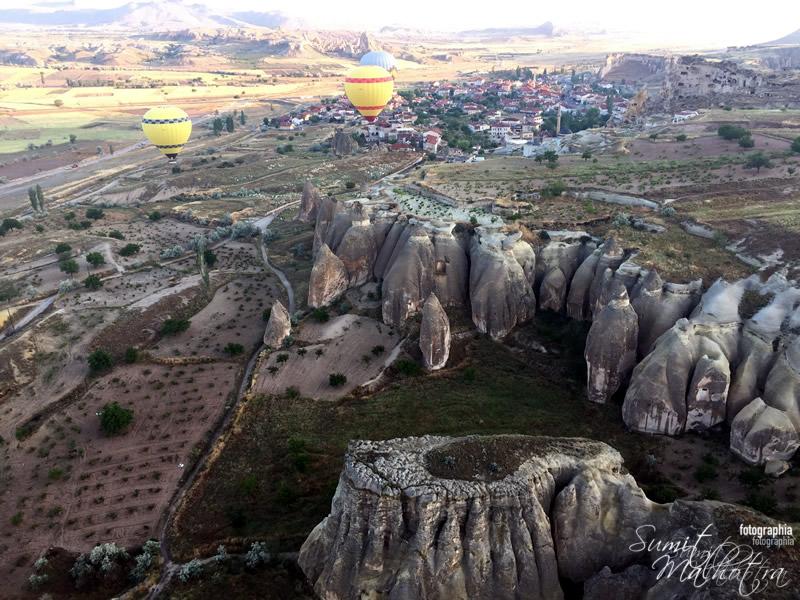 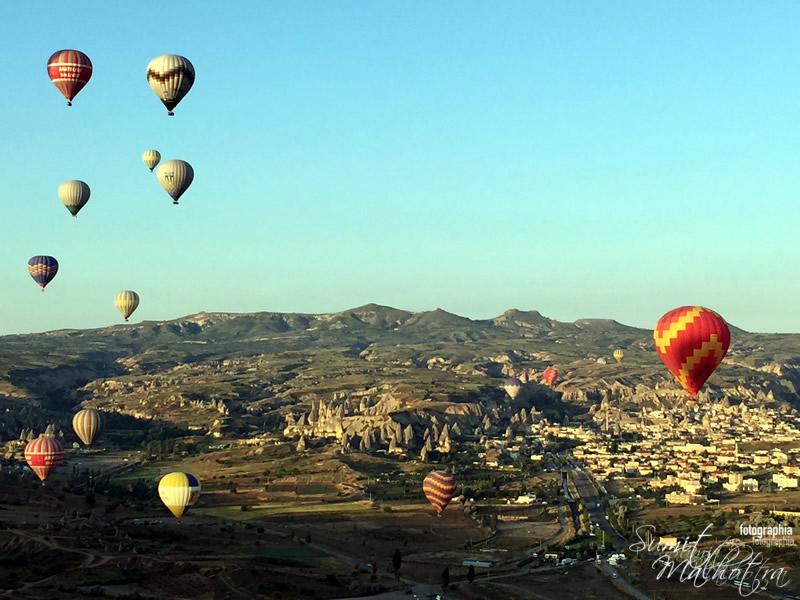 As the Balloons Drift over Cappadocia 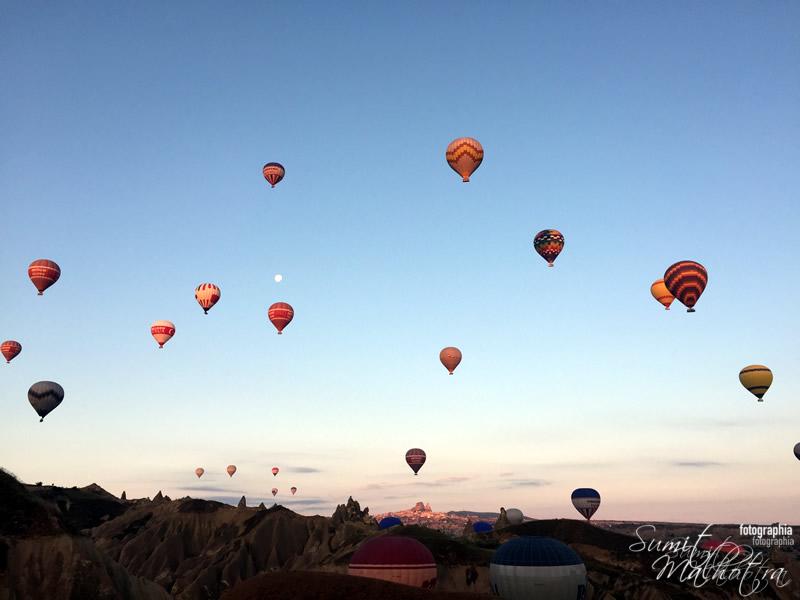 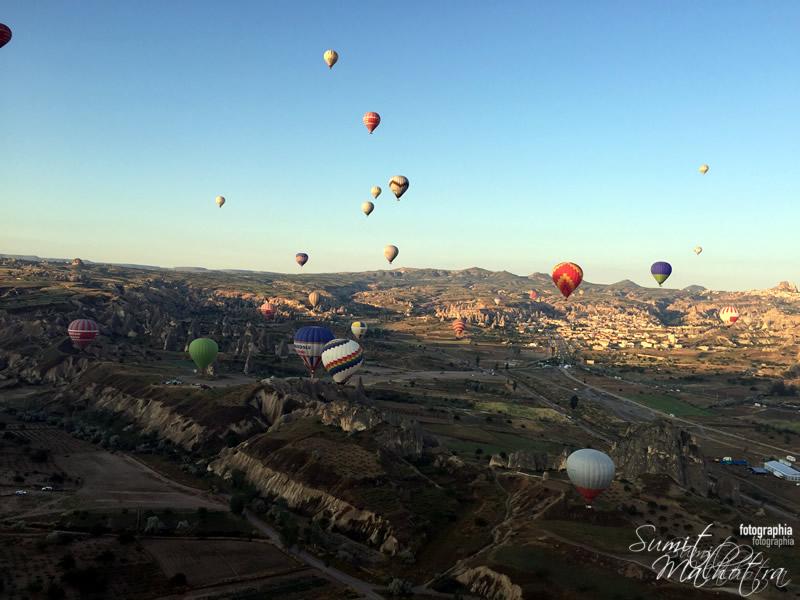 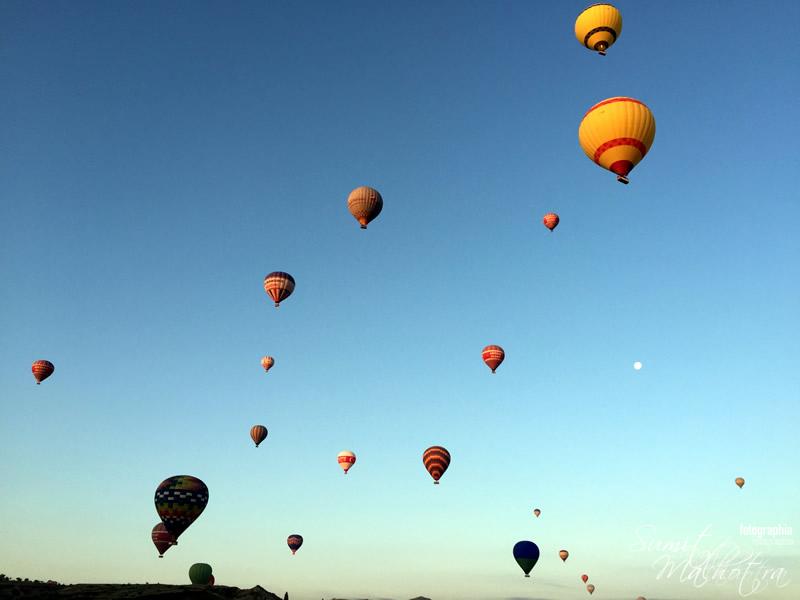 Flights Have Taken Off 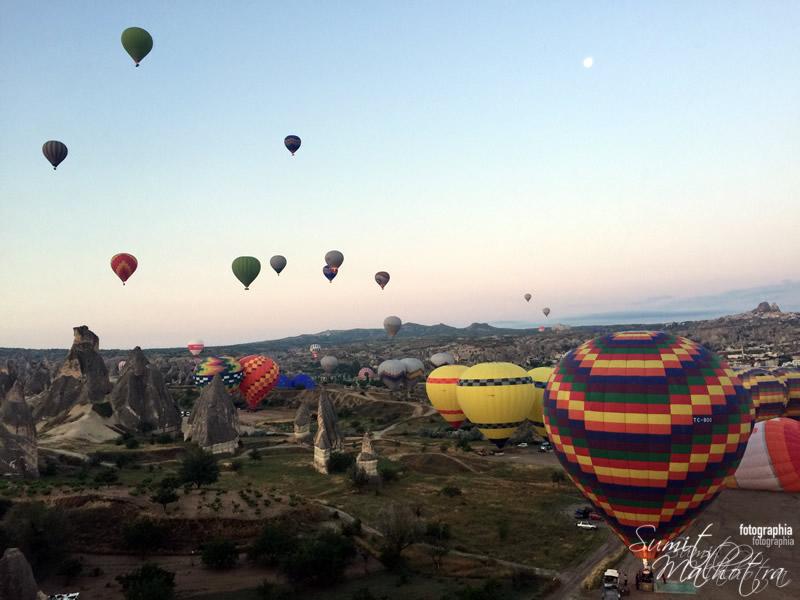 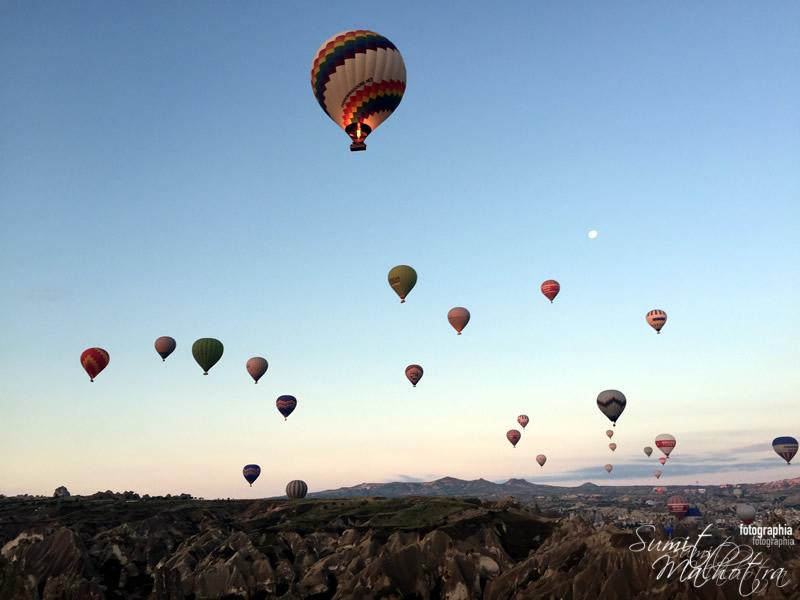 In the Cappadocian Skies

Rock Feature ahead of Balloon. Hot Air Ballooning in Cappadocia 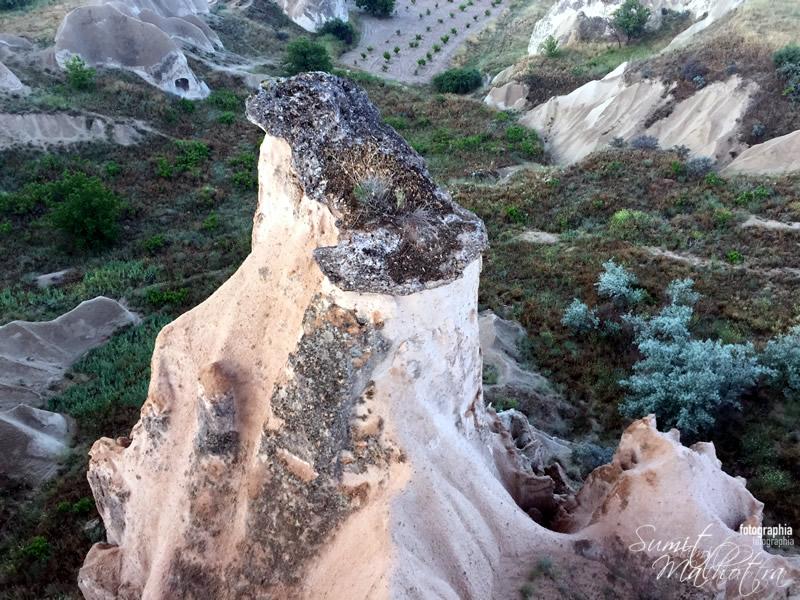 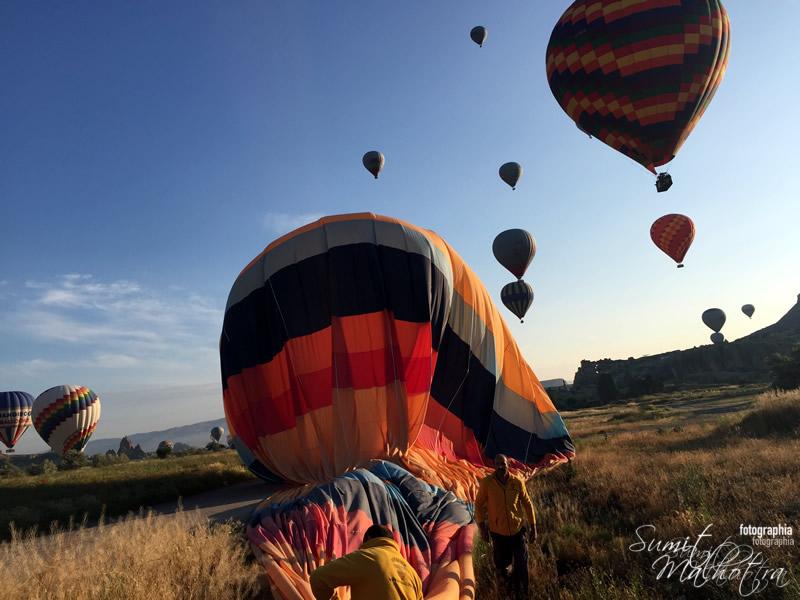 Time to Wind up the Balloon Tour 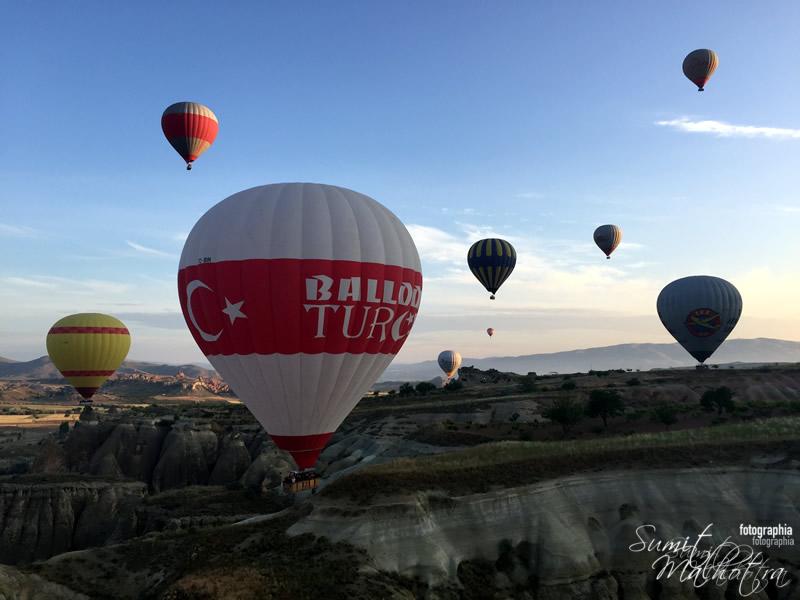 what is the name of the company in order to book?