All About Galangal | Know Your Spice Greater Galanga (Alpinia galanga) 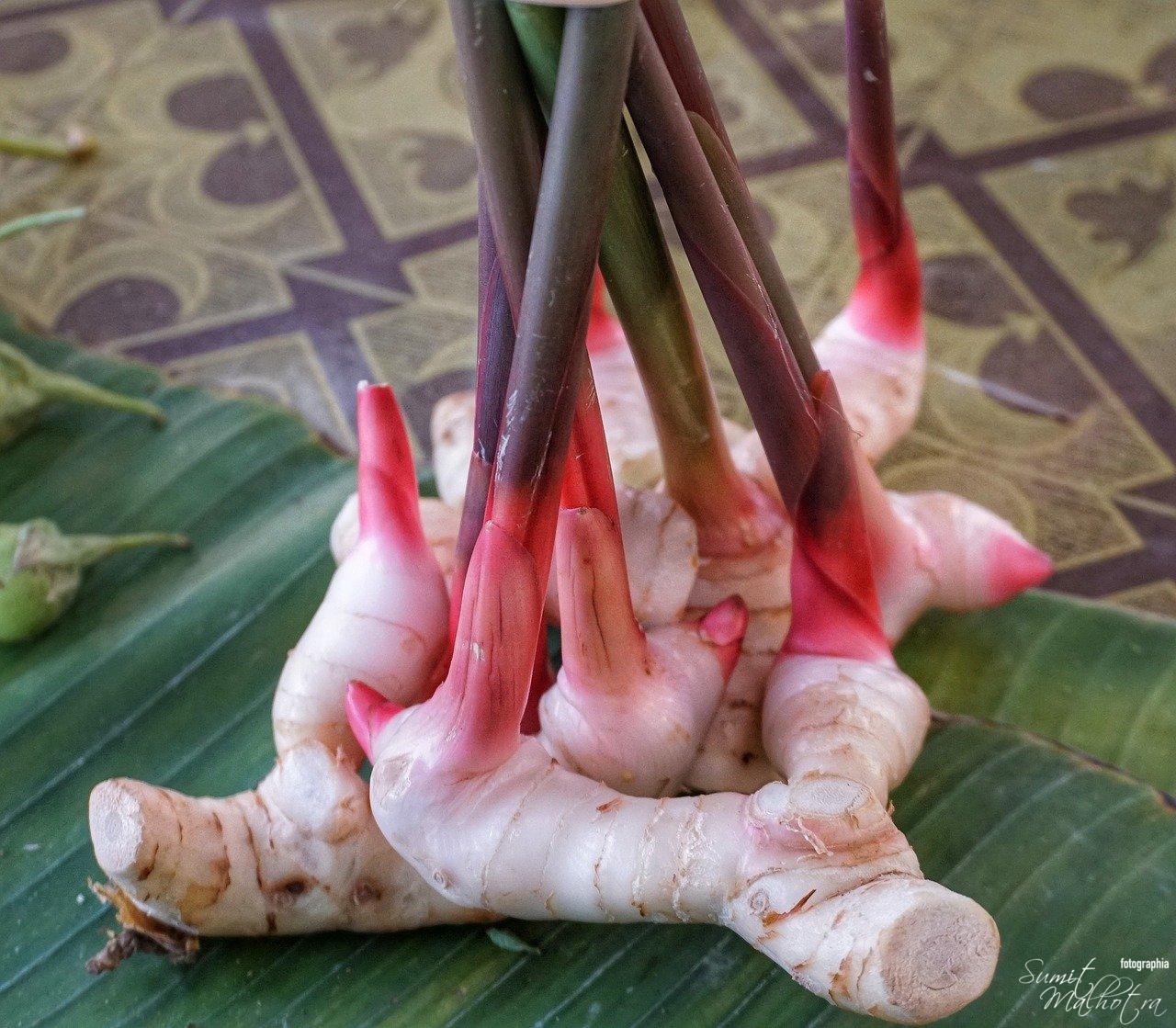 Galangal or Greater Galanga is the dried rhizome of a plant Alpinia galanga. This is a perennial, robust, tillering, rhizomatous herb.

It is one of four plants known as “galangal”, and is differentiated from the others with the common names lengkuas, greater galangal, and blue ginger.

Denser, firmer and even more knobby than common ginger, the rhizome is rounder, marked with concentric rings every half inch apart and has no skin to be peeled.

Tasting nothing like ginger, it has a hotter and sharper bite combined with a tangy spicy flavor which, to some people, is reminiscent of hot mustard.

Greater galanga is used largely as an herb in Unani medicine and as a spice in Arab cuisine and Southeast Asian cookery. Remember Thai curries.

What are the other names of Galangal?

Greater Galanga names in other languages are given below.

What exactly is Galangal?

Get to know more about Greater Galanga or Kulanjal 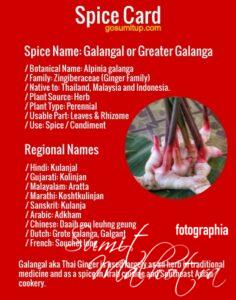 Galangal or Greater Galanga (Alpinia galanga) belong to the Zingiberaceae (Ginger Family) is a perennial herb.

It originated in South East Asia, probably southern China & it is now cultivated in Indo­china, Thai­land, Malaysia and Indo­nesia.

The rhizome resembles ginger in shape but is deep orange to brown in colour, aromatic, pungent & bitter.

Some varieties have a dark reddish brown skin and the interior is nearly white. The rhizomes are tough and difficult to break.

The pseudostem formed by the rolled leaf sheaths is erect, the inflorescence is terminal, many flowered.

The fruits are about 13 mm long, constricted in the middle and contain 3 to 6 seeds.

The rhizome is a common ingredient in Thai curries and soups such as tom kha kai. It is mashed and mixed into curry pastes. Indonesian rendang is usually spiced with galangal.

What is the nutritional value of Galangal?

Find out about the nutritional value of Greater Galanga (Alpinia galanga)

The rhizome (root) of Alpinia galanga resembles ginger in taste and appearance. One serving of galangal contains 45 calories and 2 g of dietary fiber.

It is also a source of sodium, iron, vitamins A and C. It also has some phyto-chemicals such as beta-Sitosterol, Galangin, Emodin and Quercetin.

What is the chemical composition of Galangal?

The rhizome contains up to 1.5% essential oil (1,8 cineol, α-pinene, eugenol, camphor, methyl cinnamate and sesqui­terpenes). In dried galanga, the essential oil has quantitatively different composition than in fresh one.

Whereas α-pinene, 1,8-cineol, α-bergamotene, trans-β-farnesene and β-bisabolene seem to contribute to the taste of fresh galanga equally, the dried rhizome shows lesser variety in aroma components (cineol and farnesene, mostly).

The resin causing the pungent taste (formerly called galangol or alpinol) consists of several diarylheptanoids and phenylalkanones (the latter are also found in ginger and grains of paradise). Furthermore, the rhizome is high in starch.

What is the history of Galangal?

The Latin generic name “Alpinia” was given to commemorate Prospero Alpini (1553-1617), an Italian Botanist who catalogued and described exotic plants.

The origin of the name galangal is the Chinese phrase gao liang jiang, meaning “good ginger from Gaozhou” (a city in Canton now called Maoming).

The common name “Galangal” is also thought to be derived from the Arabic Khalanjan, perhaps a perversion or an adaptation of the Chinese Liangtiang (meaning ‘mild Ginger’).

China is also probably where lesser galangal originated; greater galanga is native to Java, in Indonesia.

In the middle ages, galanga had routed widely and was used commonly all the way through Europe.

Between 1098-1179 St. Hildegard of Bingen named this ingredient as “The Spice of Life” and used it to reduce bad breath, lessen fevers, and improve weak hearts.

Hildegard’s most popular recipe was that of a greater Galanga wine, which combined white wine with the rhizome and simmered the mixture over heat to blend the flavors.

Later, a prominent herbalist utilized it to cure indigestion, heart problems as well as the deafness.

The Turks during 13th-14th centuries, used Greater Galanga as a tea while the Arabs used it as the compost for their horses.

It was also broadly used as the snuff for the various types of infections in nasal, and in Asia and Europe; it was used as an appetite manure as well as aphrodisiac.

Now in Russia, Thai ginger or Siamese ginger is used as the core medium of preparing the liqueurs and vinegars. Besides, it also has a flourishing market in India and other Asian countries.

Since time immemorial, it has been utilised in the leaf, root, powder and juice forms in ayurveda.

Today greater galanga is cultivated throughout Asia and Southeast Asia including India, China, Thailand, Cambodia, Vietnam, Singapore, Malaysia, and Indonesia, & is also in the South Pacific.

What are the uses of Galangal?

How is Greater Galanga used?

What is the the taste of Greater Galanga?

Fresh galangal has a pure and refreshing odour and a mildly spicy flavour with subtle citrus undertones.

Dried and powdered greater galanga is less fresh but more spicy, something in between of ginger and cinnamon. 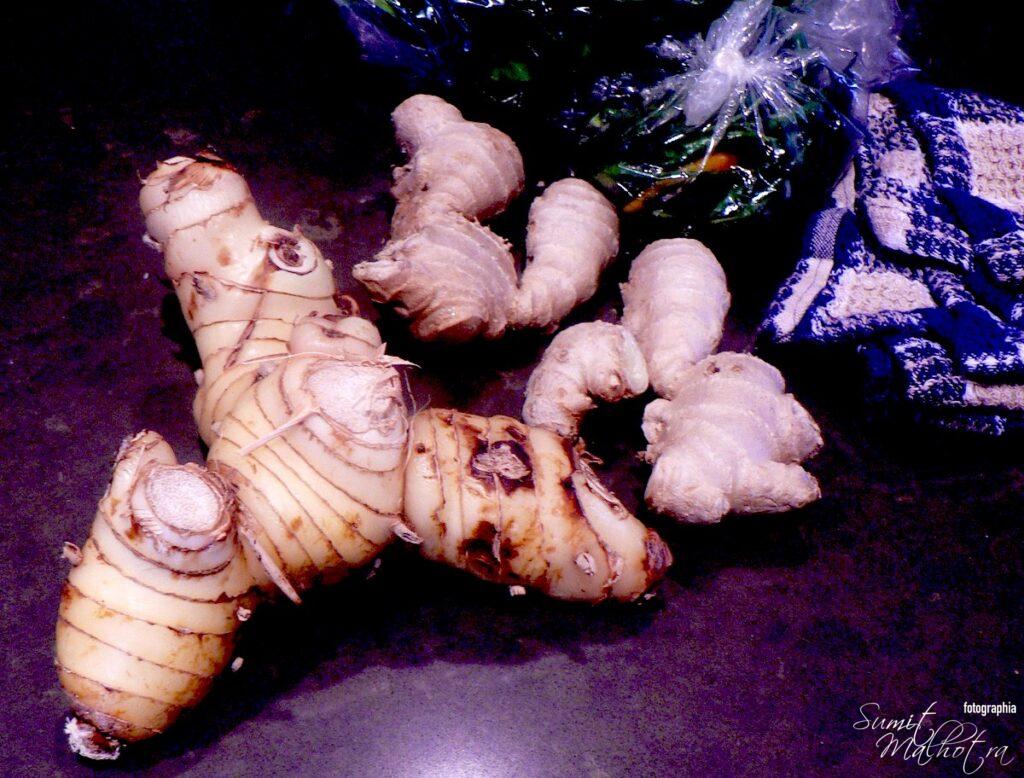 What are the ayurvedic properties of Galangal?

What can I use Galangal for?

Learn how to use Greater Galanga in your food & beverages.

Diced or sliced galangal makes an excellent addition to a stir-fry, stew or hearty pasta sauce. Because galangal is quite potent than ginger and other spices, so do add carefully to taste.

Here are some specific ideas:

How long does Galangal last?

Learn about how long does Greater Galanga last in storage.

You should freeze it with its skin intact to preserve the flavour & health benefits.

How do I store Galangal?

Learn about how to store Greater Galanga.

You should be able to freeze galangal as you can with ginger. You can cut it into smaller pieces and store them in a container or ziplock bag in the freezer. It’s easy to peel and grate while still frozen.

Store the whole fresh galangal root refrigerated in a ziplock bag with a paper towel for up to 3 weeks. To preserve longer, slice the unpeeled root thinly and air dry or freeze.

Is there a substitute for Galangal?

Learn how to use a substitute for Greater Galanga if unavailable

The best substitute for greater galangal is to use 1 tablespoon young, fresh ginger root with 1/8 to 1/4 teaspoon fresh lemon juice.

You can also substitute an equal amount of frozen galangal, thawed if you have some frozen.

Where do I buy Galangal from?

Where to Locate Greater Galanga in the Grocery Store?

The rhizome can be found fresh or in dried and powdered form from local markets and specialty grocers, and in dried form through supermarkets and online retailers.

It is also available as Galangal oil.

What are the health benefits of Galangal?

The following are health benefits of Kulanjan, Greater Galanga or Thai Ginger. 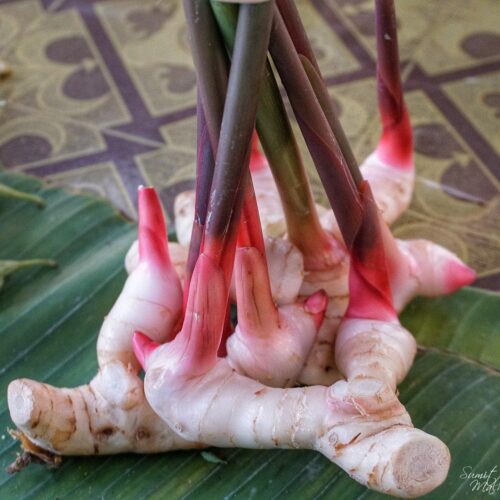 All About Galangal (Alpinia galanga) | Benefits of Galangal

Galangal or Greater Galanga is the dried rhizome of a plant Alpinia galanga. This is a perennial, robust, tillering, rhizomatous herb.

It is one of four plants known as “galangal”, and is differentiated from the others with the common names lengkuas, greater galangal, and blue ginger.

Denser, firmer and even more knobby than common ginger, the rhizome is rounder, marked with concentric rings every half inch apart and has no skin to be peeled.

Tasting nothing like ginger, it has a hotter and sharper bite combined with a tangy spicy flavor which, to some people, is reminiscent of hot mustard.

Galangal is used largely as an herb in Unani medicine and as a spice in Arab cuisine and Southeast Asian cookery. Remember Thai curries.

All About Dill | Know Your Spice Sowa or Soya (Anethum graveolens)

Wonderful article. It is a great way to learn about what we eat through your All About *spice* series. I read all your artciles and recipes. Keep writing & keep sharing.

What an informative post. I now know lots of facts about galangal!

Thanks for all the awesome information about galangal!

wow this is great information thank you for taking the time to give us an in depth background !

I had heard of it before but never used it in my cooking and I definitely didn’t know what the root looked like. Thabks for all thevinfo. Very useful.

Jacqueline Thank you. You can use galangal as a substitute for ginger too. It works well.

I did not know very much about this spice but after reading your article I feel like a pro on the subject. So much helpful information!