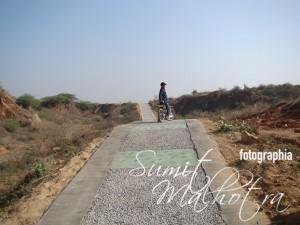 Muggy … one word is what came to my mind the moment I stepped out of the house today. Monsoons in Gurgaon have been playing truant and have led to an increased amount of humidity. 92% is bloody high for anyone’s comfort.

This was last Saturday. We slept beyond 7 AM, which is the self-appointed cut off time to go cycling in the morning. We slept way beyond that. Sidhant being disappointed at the morning failure insisted that we both go to Aravali Biodiversity Park MG Road later in the day.

But I was surely not in the favour of getting drenched by the salty excreta of the gazillion body pores caused by the mugginess of the day. Though it was cloudy and slightly windy, the weather still was quite disdainful. We eventually agreed upon doing it in the evening around 5.30 PM when I thought it would be cooler.

However, the weather gods seemed to conspire against us since the weather took a turn for the worse by evening. The wind had stopped completely and to further my disappointment it was bright shiny Sun in the sky breathing down the fire. The resultant breath was being delivered earthwards without respite.

We also found that both of Sidhant’s bikes had flat tires that had to be fixed. We loaded the bright yellow bike into the Tata Safari’s large spacious boot, installed our sunglasses and set out on our little expedition to the Aravali Biodiversity Park in Gurgaon. By the time we got the tires inflated and reached the park, it was almost 6 PM.

The Aravali Biodiversity Park in Gurgaon is spread over 160 acres of land right at the Delhi – Gurgaon border on Mehrauli Gurgaon road. If you are coming from Delhi, you should take a U-turn from in front of the Ajanta Filling Station just after crossing into Gurgaon and move left towards the service lane to find the entry gate.

If you are coming from the Sikanderpur side, you need to simply cross the traffic junction at the DLF Phase III & Neelkanth Hospital turn and move left into the service lane. The entry gate is just about 100 meters from there.

The Aravali Biodiversity Park Gurgaon is being developed over several pathways that have been carved out by sustained people use. The trajectory that these pathways follow is based on intuitive arcs that are in keeping with the site topography and the general layout of the land. These existing routes are now being consolidated into permanent pathways.

The more prominent of these developed permanent paths traverse the site from the west to the south-east, connecting the two natural depressions before arcing north. With this path serving as the main artery, four additional trails have been created along the periphery of the park which a lot of people are using for nature walks and cycling.

This is surely a great way of us engaging with the natural systems at work in the Aravali Biodiversity Park which is what we wanted to do with Sidhant cycling and me following him on my feet. This makes a business case for me to invest in a bike too and is seriously being considered. The park is widely spread and is being developed further to serve as the lungs of Gurgaon.

It’s amazing to see such green hugeness in the midst of the concrete jungle the city of Gurgaon has become.

Once in the park when you look around, on one side are visible the huge buildings made with glass and steel. You see high rise apartments, office complexes, and hotels and of course the Yellow metro line cutting through them. While on the other side you the greens of the undeveloped, uninhabited Aravali ‘ridge’ is there to amaze you.

As we approached the Aravali Biodiversity Park, we found the boom down on the entry gate. There was a huge puddle of water right below it. We decided to try the exit gate, where the boom was up high and as we entered, we saw a few cars parked too.

Offloading the bicycle, we set off almost immediately on the main trail, Sidhant taking advantage of the slope pedalled furiously and speedily went down the hill. As we crossed, the worked upon, amphitheatre, we had an option of either carrying on straight which was an uphill climb or to move towards another trail going towards the Eastern side.

We decided on taking the former so that Sidhant could apply more pressure to his paddling which would contribute to building his stamina. As we climbed the three uphill humps, Sidhant struggled and kept getting off the bike. He needed a push, both mentally and physically, to go on and that he gloriously did.

We eventually reached the end of the trail which was announced by a bolted huge green gate just planted in the middle without walls on either side.

The function of this gate confounded us since it was hardly protecting the trail which went beyond it. Even though Sidhant was tempted to unbolt the loud green gate, which any young inquisitive tyke would do, we decided to respect the sanctity of the bolted gate and turned around on the bike to follow the eastern trail.

As we headed towards the eastern trail which again had an uphill climb, an expatriate followed by a young Indian boy buzzed past us on their cycles towards the green gate. We lost sight of them soon since they crossed the gate and went beyond, while we started ascending towards the untouched side of the Aravali Biodiversity Park.

Sidhant was quite happy to see the downhill as he finished his short climb on this trail. He started descending almost immediately and came across a group of workers returning after completing their work on the pathways beyond the trail we were on.

As we went ahead, we came across a settlement of workers who were creating the permanent pathways. There were kids right in the path of Sidhant’s bike sitting and playing with mud right in the centre. As Sidhant cleverly manoeuvred his bike through the group of children, we came across a bunch of branches stopping him in his track.

A mason working beyond these branches cautiously told him to move his bike from the other side since this bunch was protecting the wet cement underneath. The cemented path in the Aravali Biodiversity Park has imprints of leaves embedded on it in plain cemented sections. These are what two masons were creating which pretty much intrigued Sidhant and he gladly offered his services to them.

As the mason instructed, Sidhant duly pressed the metallic leaf-shaped frame into the wet cement and hammered it in gently till the frame settled nicely into the cement leaving its imprint. Sidhant then removed the frame and repeated the task once again to make another imprint. He was impressed with his doing as well as he loved the thought of having contributed something towards the development of the park. This was brilliant kissa Gurgaon or a true story to be a part of history.

We thanked the masons for the opportunity and moved on towards the final climb beyond which I could see our car parked clearly. This climb proved to be a bit difficult and Sidhant dragged his cycle most of the way. By the time we got to the car, the little biker was clearly exhausted and both of us were sweating profusely. So, we didn’t waste much time to get into the car and drove away.

Some pics from the Aravali Biodiversity Park MG Road Gurgaon 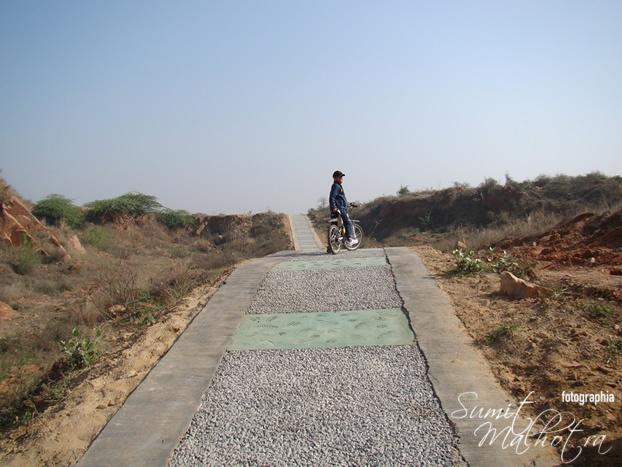 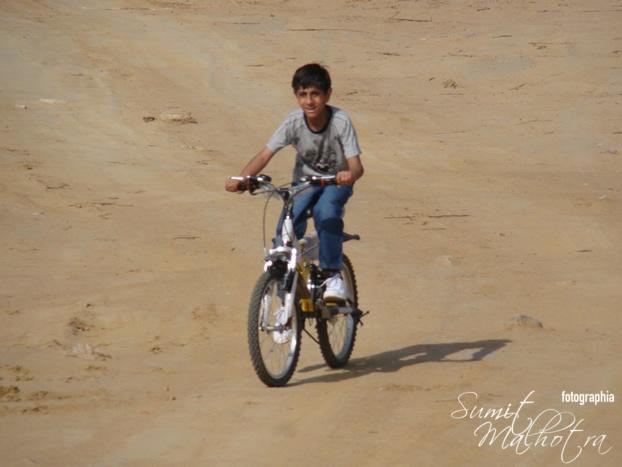