A visit for the love of their fluffy naans and their legendary butter chicken. 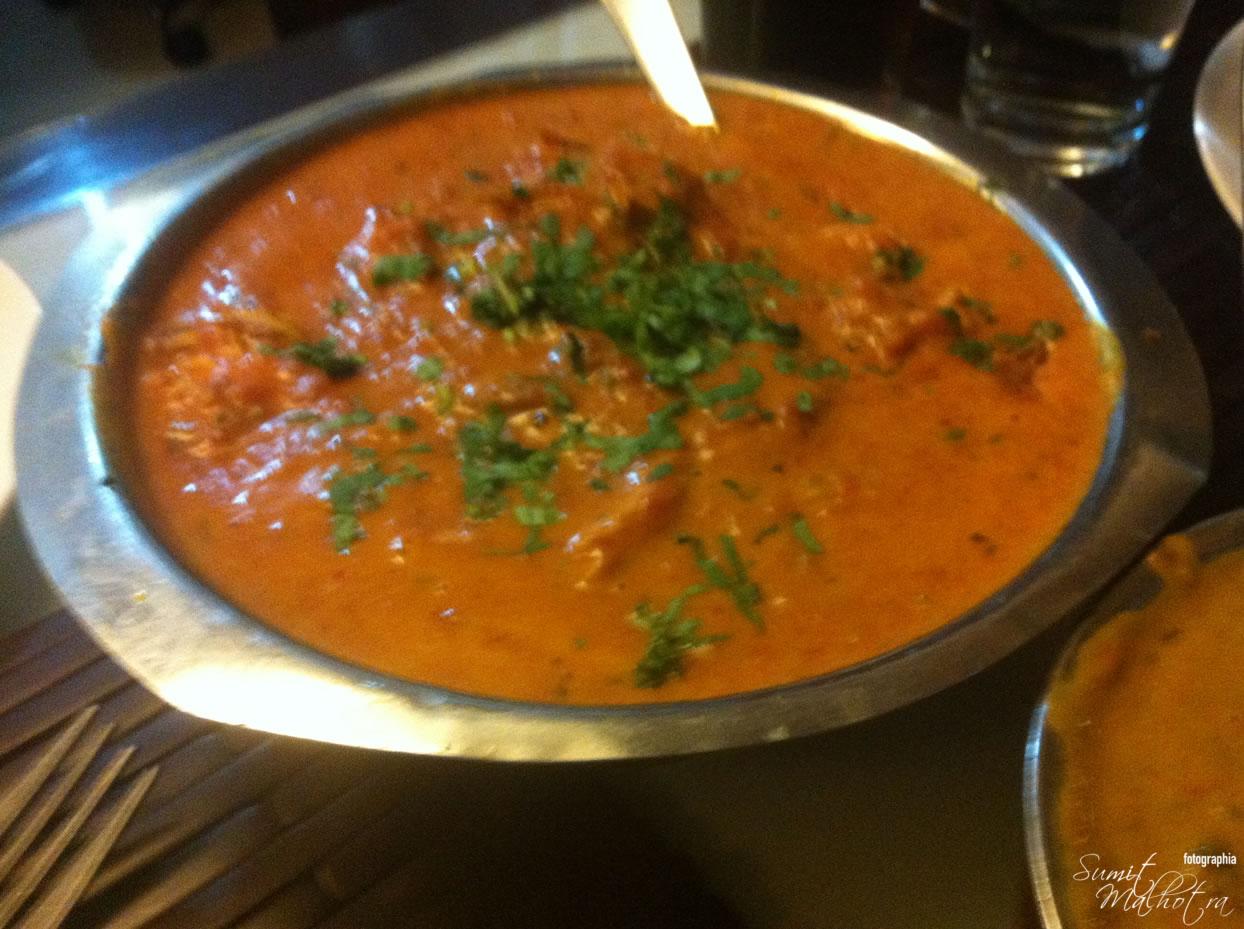 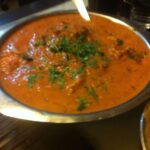 All in all, a lot of reasons hinder my visit to the “real” Mughal Mahal. Having said that, I have already made two trips to Mughal Mahal, Rajendra Place in this year – all for the love of their crisp, fluffy naans and the butter chicken that is no less than a legend. I often jest humorously that apart from blood also flows in my veins the creamy butter chicken gravy of Mughal Mahal.

Find it’s review, details, address, phone numbers, read about my experience, see the photos and then decide if Mughal Mahal New Delhi is worthy of your precious order.

Do drop in a comment on my review too, if you please, with your feedback about the outlet. It’ll be great to have you share your experience as well.

I have been going to Mughal Mahal from the days when they had a string painting adorning their main wall (which houses a huge mirror now). It was the same time when they used to serve mutton pasandah (it is off the menu now).

Being born and brought up in Old Rajinder Nagar, Mughal Mahal, Rajendra Place was one of the two non-negotiable “venue” for our special occasions.

It has today become a landmark in itself, with several offices using it as a direction indicator of their office addresses.

A lot of water has flown under the bridge since my childhood days. Mughal Mahal, Rajendra Place has visibly taken a beating by time and looks run down. Nirula’s Chinese Room has shut down.

My family has moved to Gurgaon and we work on maintaining our skeletal ties with Delhi. To make matters worse or maybe better for Butter Chicken’s sake, a Mughal Mahal franchise has opened in Sector 31 Market in Gurgaon.

Do Read the Review of Mughal Mahal Gurgaon.

All in all, there are a lot of reasons that hinder my visit to the “real” Mughal Mahal.

Having said that, I have already made two trips to Mughal Mahal, Rajendra Place in this year – all for the love of their crisp, fluffy naans and the butter chicken that is no less than a legend.

I often jest humorously that apart from blood also flows in my veins the creamy butter chicken gravy of Mughal Mahal.

The interiors of Mughal Mahal are a bit run down and tacky, if I may say even after renovations. They have moved ahead from having a string painting adorning their main wall to Mughal artwork.

During my last visit, the brightly lit restaurant was full of families celebrating birthdays or just eating out as well as a group of beaten-down corporate executives drinking their stress away.

There was a lot of Punjabi chatter around with stray conversations appreciating the great food Mughal Mahal restaurant serves till date.

The solid wood tables were full which is an indicator of a successful Mughlai restaurant, especially in today’s competitive time.

The Food That You Go To Mughal Mahal For

The packaging for my leftover doggy bags was spill proof, and functional

The Manager and stewards looked primarily the same from the years of my childhood. I have a recollection of these young, lean servers back then who have not only aged but grown (horizontally) too.

While I thought the pot-bellied Manager looked a bit uninterested, the service guys were super and served with a smile. The tips really go into their pockets.

The order was taken & presented in a reasonable time, though a couple of things requested were not available hence there was a bit of a disappointment.

On the other hand, we didn’t miss a generous “thank you for coming” and “please come again“. This speaks volumes about ensuring that the patrons remember the delectable food as well as splendid service.

The food service, quality, quantity and packaging… everything was top class.The quantity did justify the price that a lot of people think is quite high.

Dear Readers! Please note that this is not a review that has been paid for by the outlet or sponsored by an agency for the outlet.

Mughal Mahal Patel Nagar serves great food in my opinion. When one eats at Mughal Mahal you have to forget your sensitivity (or averseness) to butter, cream and ghee. My order is fairly standard & oh!! it indeed is loaded.

Butter Chicken – This is the best butter chicken I have had till this date in this life and still looks and tastes the same. It’s the yummiest, creamiest, tangiest, boneless butter chicken ever (Rs.895). 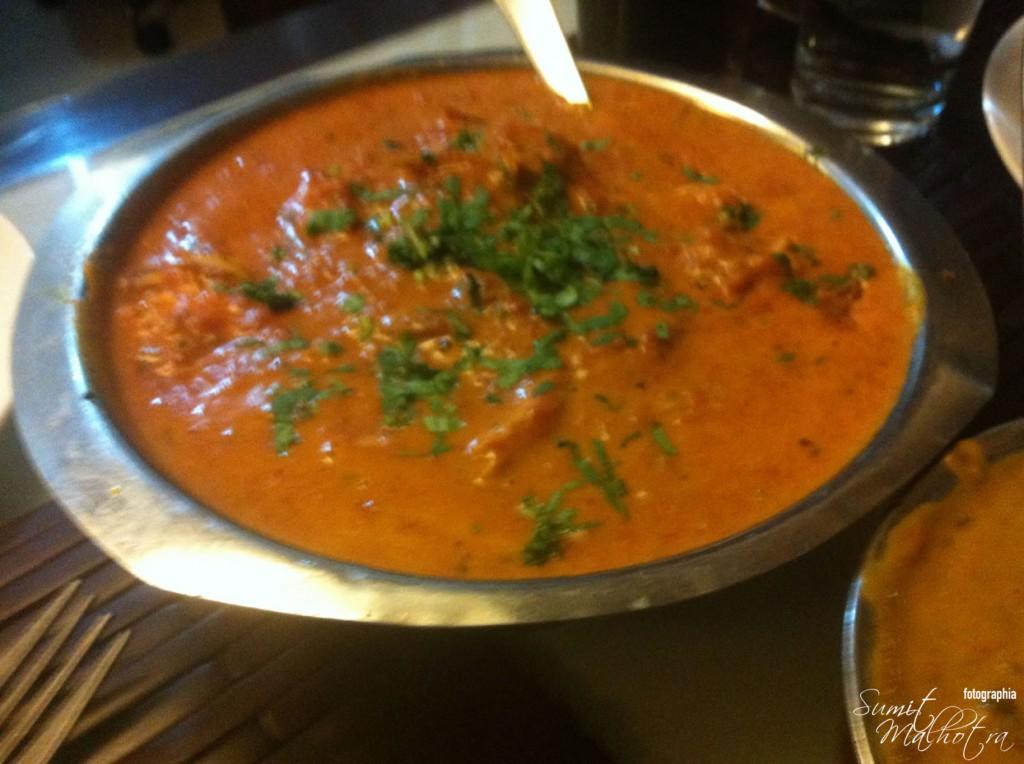 Naan – Their naans are always at their crispiest best. While some of us opted for Butter & Garlic Naan, I always reserve myself for their huge plain naans which come topped with Kalonji (Nigella Seeds). 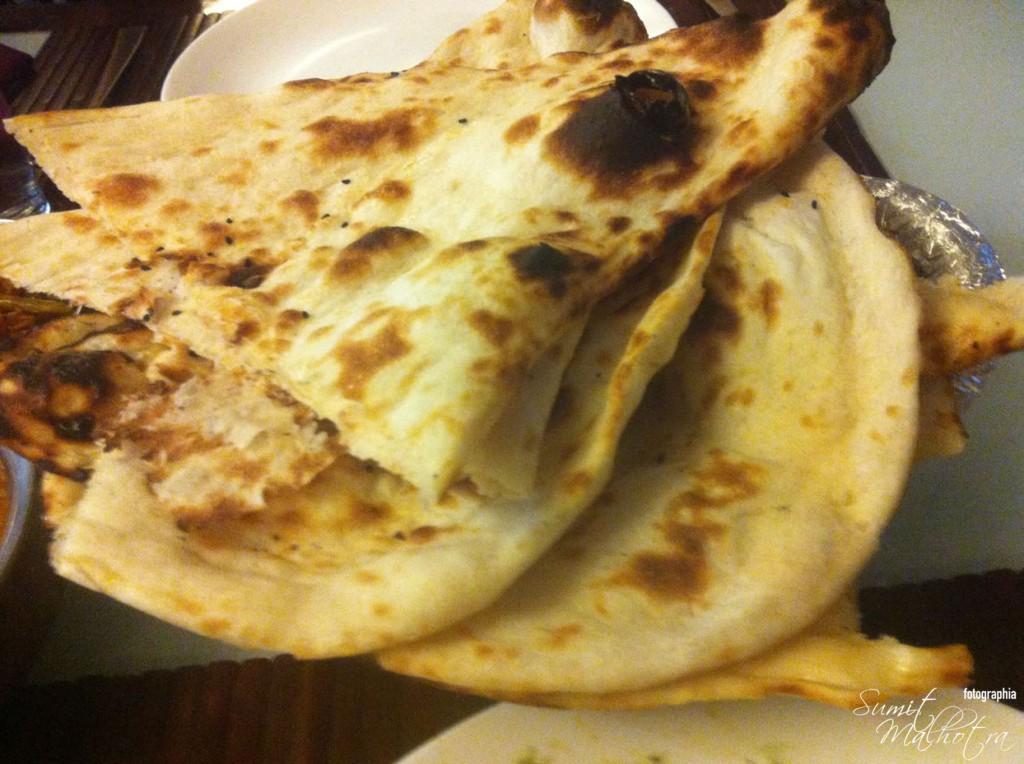 Gosht Pasandah – (Rs.365) made with delicately spiced, small pieces of succulent mutton. Unfortunately, the Gosht Pasandah has been removed from the menu now. So, you can opt for Gosht Rare that is equally good. 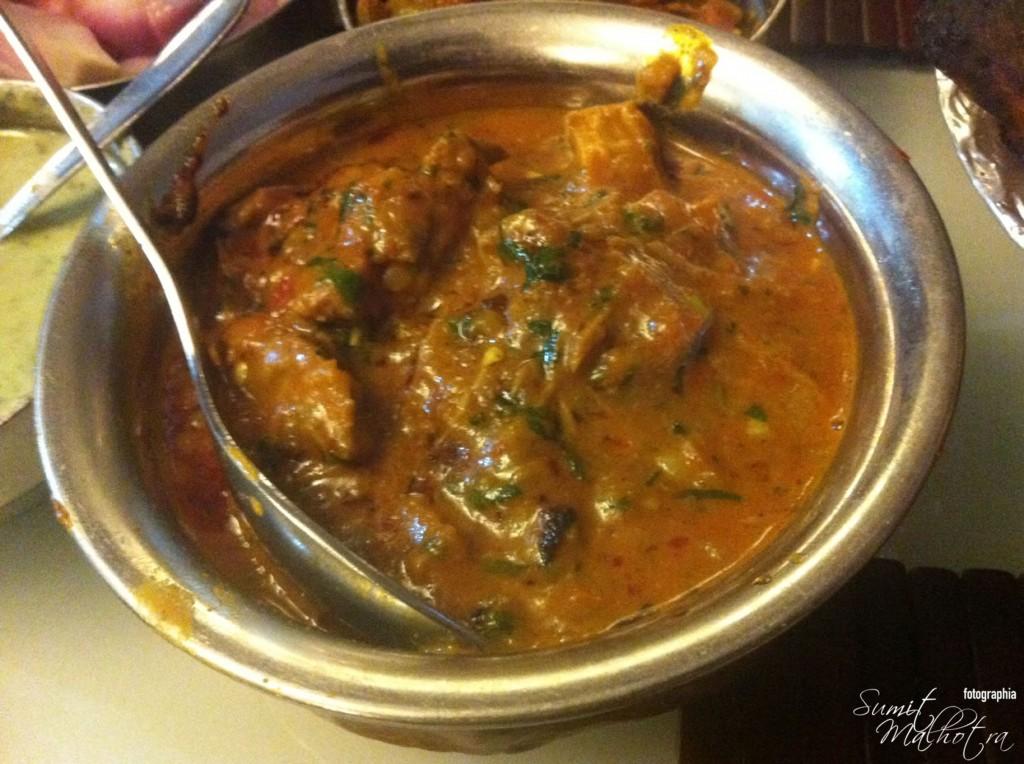 Paneer Makhani – It is always brilliant with no overflowing white cream and no butter dripping from the top. Still it has a very distinct taste & a very enjoyable bite. It simply melts in your mouth. 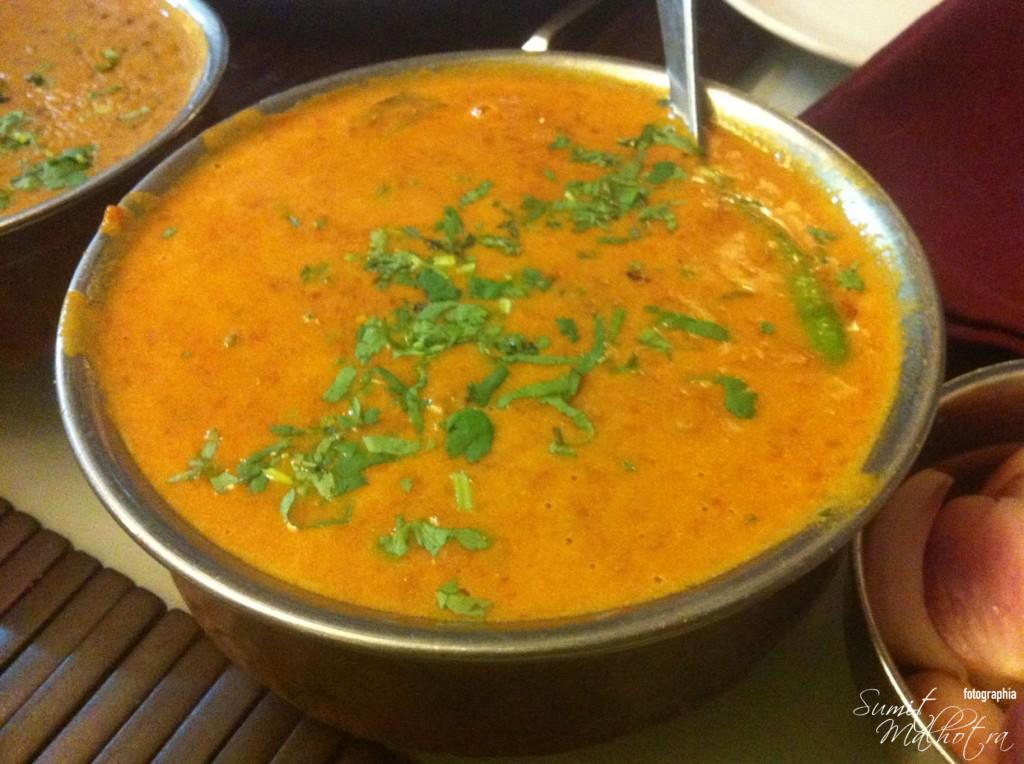 Fish Tikka – Their fish tikka is pretty decent as is their chicken tikka and chicken malai tikka. It has a light lemony taste and slightly spicy flavours. My sister absolutely loves it.

Check Amount for 4 people: Rs. 3079 (a lot of food was doggy bagged) | Revisit plans: Can’t live without this stuff, really.

JUST TO SUM IT UP

So now, just to sum it up the entire experience of Mughal Mahal Ardee City

All in all, there are a lot of reasons hinder my visit to the “real” Mughal Mahal Rajendra Place.

Having said that, I have already made two trips to Mughal Mahal Rajendra Place in this year – all for the love of their crisp, fluffy naans and the butter chicken that is no less than a legend.

I often jest humorously that apart from blood also flows in my veins the creamy butter chicken gravy of Mughal Mahal.

A visit to Mughal Mahal Rajendra Place for me is like living my carefree days of life once again with scrumptious food on special occasions or just like that too. It is really not a restaurant for me but a part of my life’s (culinary) journey.

If you haven’t been there ever, it is about time you did.

DO CHECKOUT - MORE SUCH RESTAURANTS IN DELHI

I always  endeavour to provide you with as accurate information as possible, however I make no warranties on the completeness or accuracy of the information and/or products on this blog.

Some information will understandably change or be less accurate as time passes.

When it comes to opening hours, website addresses and restaurant addresses, please double check this information as things may have changed since writing the blog post.

I am always 100% honest in my reviews.  If I don’t like something, I probably wont give it any attention on my blog and if I write about it, I’ll ensure it is elaborate enough so that the business owners can make relevant change.

I never accept payments to compromise my food philosophy, so you wont see me recommending or promoting restaurants or products that go against what I believe.

I prefer to dine anonymously and pay for my own meals. I believe that provides a more truthful dining experience for me as well as my readers.

My reviews are not just about my experience, they are also a clear endorsement of what I liked and what an entity or an eatery can do better to better enhance their business. This is a moment of truth for them.

While they aren’t my favorite thing to do, I really cannot afford to keep this blog running without doing the occasional sponsored post.

Something about being paid to write about a subject bothers me, but I will always be completely honest.

I never accept payments to write something that I do not agree with and I only accept sponsored posts that fit into my food philosophy so you’ll never read about me recommending everything people may pay for.

All About Cumin Seeds | Know Your Spice Jeera (Cuminum...