The funny part is and which I don’t understand, is that if the East Indian cuisine is so different from others, how come they don’t have any egg recipes published online. My research has not yielded even a single egg recipe.

So, it gives me great pride to have made and shared at least one Egg Dish online that is absolutely wonderful and because of the courtesy of East Indian Bottle Masala.

So my bottle masala omelette came out absolutely delicious. And, my tryst continued with the glorious spice mix. Hence, I used it for making my breakfast this morning.

In fact, the flavours of this East Indian masala have enamoured me to cook more and more with it.

And this time, the fiery red colour of the mixed spice gave a nice rich tinge to the omelette I used it in. It was a brilliant eat and treat because of the East Indian Bottle Masala.

So do you know this East Indian Masala was traditionally stored in long-nosed glass bottles?

These were usually beer bottles. And, that’s how the masala got the name “Bottle Masala“. Back then the bottle masala was tightly packed with a stick to remove the air within the spices in the bottle. This made it airtight and hence not easily spoilt.

The Story – Bombay’s growth, in the 19th century, was good news for the local Christians, who were well-positioned to work with the British rulers. But they were less than pleased to find that the city’s prosperity started attracting Goan Christians, who were soon competing for the same jobs.

To differentiate themselves the locals decided to adopt a new name and the name they chose was East Indians, after the East India Company.

The fact that this made them East Indians in Western India didn’t seem to matter. Though in time a further level of confusion was added when people abroad started referring to all Indians as East Indians.

This helped them distinguish Indian from the West Indians of the Caribbeans, which would make the community East Indian East Indians from Western India.

The Bottle Masala – Spices in the airtight bottles remained fresh over long periods of time along the humid Indian coastline. Even today, a little is taken out and used in various dishes. And, this happens every day.

In fact, before I was able to make bottle masala for my own self, I used to get it from Mumbai – Bottle Masala made by Sandra from Bandra. :)

History & story on one side, my challenge was different. At this time, I didn’t have a fixed recipe in mind for the masala omelette. And, not much came out of my research on the internet either.

So I played on by my instincts and got amply rewarded. The bottle masala omelette came out to me nice & spicy. It was a perfect finish to a filling and satisfying breakfast. 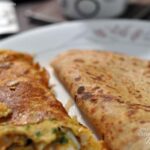