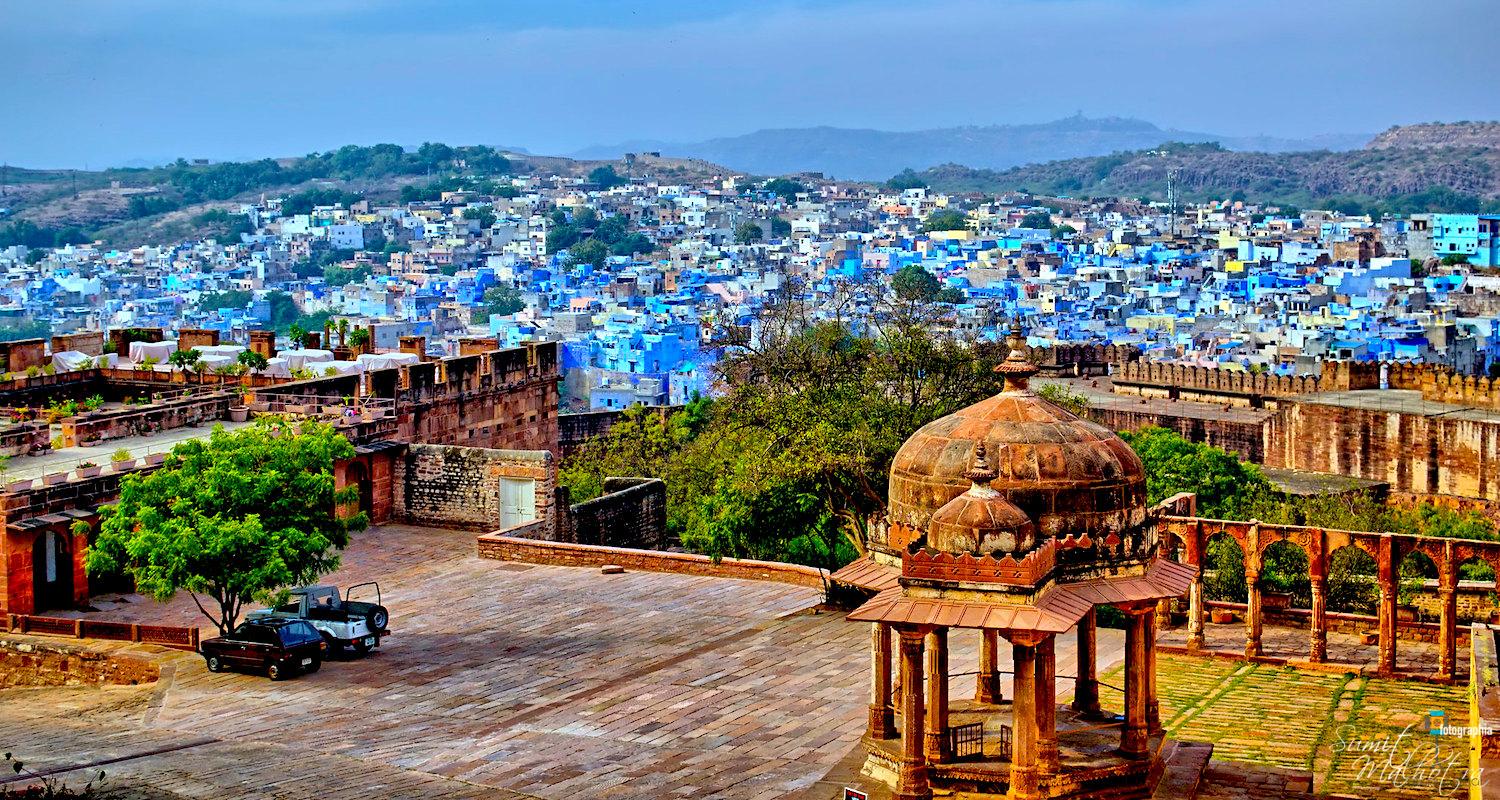 Departure from the Jodhpur City and arrival at Udaipur.

Jodhpur to Udaipur (Day 4 Rajasthan Road Trip) – We had an early start in Jodhpur, but the city of Mehrangarh Fort was still sleeping. I must warn you here, I have come to understand that Jodhpur is a sleepy city. It goes to sleep at 10 PM and doesn’t wake up till after 8.30 AM. In simpler words you won’t get anything for breakfast till perhaps 9 AM.

Jodhpur, popularly called the Blue City, is a city in the Thar Desert of the northwest Indian state of Rajasthan.

Set on on a rocky outcrop, the Mehrangarh fort overlooks the walled city, where many buildings are painted the city’s iconic shade of blue.

The Drive from Jodhpur to Pali

Totally famished and in search for some breakfast, but the 4th Day called for our necessary drive from Jodhpur to Pali and then to Udaipur.

We had to leave Jodhpur for Pali really early. And, we were really hungry at the time of departure. The heritage hotel’s staff was still in slumberland.

They would rise and start preparing breakfast only at 8.30 we were told by the receptionist at The Kothi Heritage Hotel – the 130 year old property.

More so, they have a rule, “no outside food allowed” which is strange, we needed our breakfast desperately.

Since we were not really tourists, we couldn’t wait for them to rustle out from their sleep. We had to leave on our schedule and that we did eventually.

Our Quest for Breakfast

Most of the dhabas (restaurants on Indian highways) also declined for food was not ready, until ...

Since we had to leave for Bali (via Pali, the district and then through Falna). We left Jodhpur on empty stomachs. We, literally, stopped at every Dhaba on Pali road to find something to eat.

Luckily, as we exited Jodhpur and crossed into the Pali district, we chanced upon a Dhaba called Rajputana Hotel & Restaurant on the highway.

The dhaba was 100% vegetarian, but fortunately for us, it had food available. Located right across the road to a local temple, it was busy, really busy.

We settled ourselves on a table and ordered our brunch. We ate really nice and hot from the griddle parathas stuffed with a spicy mix of onions and potatoes.

I could see the amount of chillies, both red and green, that went into the paratha with every tear of its bite. These were accompanied by fresh curd and pickle, so it was perfection on a hungry man’s plate.

We washed everything down with a “special tea” (the boy who made it used full cream milk), it was a perfect breakfast and we were rejuvenated for the day.

Educate Girls is a non-governmental organisation that tackles the issues at the root of gender inequality in India’s education system.

Fully satiated, moving onwards we reached the “Educate Girls” office in Bali (Pali) in about half and hour or so.

Educate Girls is an NGO (non-governmental organisation) that works to systematically challenge structural, cultural and socio-economic barriers through a combination of community mobilisation strategies and child-centred learning and teaching techniques.

Their works is to enhance girls’ attendance and retention in 500 schools in Rajasthan’s Pali district. The organisation currently serves approximately 4,500 schools in the Pali and Jalore districts.

The office managers treated us to some excellent “chaas” that cooled us down even more. If you are in Rajasthan, Chaas is one thing that’s not to be missed, so do drink it by litres.

A Brief Temple Halt at Ranakpur

After the meeting, we moved on to Ranakpur and arrived around the lunch hour. Ranakpur is very famous for its Jain & Lord Shiva temples, so obviously the food options for lunch out there were very limited for us omnivores.

Located in a village of near Sadri town in the Pali district of Rajasthan, this area is in the Aravallis of Rajsamand and Pali border. It is in close proximity of the Kumbhalgarh Fort & the Kumbhalgarh wildlife sanctuary.

The Ranakpur Jain temple or Chaturmukha Dharana Vihara is a Jain temple, dedicated to Tirthankara Rishabhanatha.

The temple honours Adinath, the first Tirthankar of the present half-cycle (avasarpiṇī) according to Jain cosmology.

The Ranakpur temple is one of the largest and most important Jain temples in India. Furthermore, the temple campus here includes various temples.

Located very close to the Chaturmukha Dharana Vihara is the Parshuram Mahadev Temple that is is a cave temple dedicated to Lord Shiva. It also houses his son, Lord Ganesha‘s figurines.

This temple (cave) is located 3,995 feet above sea level. It has naturally made figurines or idols of Lord Ganesha and Lord Shiva. It also has nine Kunds (wells or tanks) that never go dry.

It is believed that Parshuram, the sixth avatar of Lord Vishnu, made this cave with his axe to worship Lord Shiva at this serene place in the foothills of the Aravallis mountain range.

Ranakpur - The Gateway to the Kumbhalgarh Wildlife Sanctuary

Kumbhalgarh is the birthplace of Maharana Pratap, the legendary King of Mewar.

The drive through the sanctuary is absolutely fantastic with its mountain climbs, twisting turns and splendid nature’s bounty in abundance.

While driving & enjoying the beauty of the landscape, we were also keenly eyeing the signboards of various resorts which were going to present themselves as soon as we exited the protected jungle area.

Kumbhalgarh Fort, a Mewar fortress on the westerly range of Aravalli Hills, in the Rajsamand district near Udaipur of Rajasthan
Do you see something peculiar in this picture? This was taken while crossing the Kumbalgark Wildlife Sanctuary. The drive and the views were simply amazing.

Two, Once Again, Famished Souls at The Aranyawas, Kumbhalgarh

We stopped at Aranyawas, which was the first one to appear as we started our climb down the mountains. The place turned out to be quite serene and extremely well managed from the reception located at the car park.

Their security guard happily received and assisted us in parking the car and then gave directions towards the restaurant. We headed straight for lunch.

The stewards at the restaurant were simple, gracious and welcoming. We were seated, luncheon mats, cutlery and plates were laid and order for our lunch was taken quite promptly.

We kept it non-complicated and ordered a simple fare of Chicken Curry, Chana Masala to go with Rotis. It would be enough for both of us.

The food for lunch was brilliantly done. I think it had a pahari touch to it but the spices that were used were obviously local.

Full of spicy flavour the chicken was soft and tender, while the chanas had slight bite to them but were refreshing in taste. Best of all, there was no trace of oil in either of the dishes. It was a perfect meal in a jungle!

i ventured out after lunch to explore the Aranyawas Resort property. It is undoubtedly set in a wild, mountain valley, hidden away from the outside world.

The natural terrain is formed of the rugged mountainside with outcrops of rock and indigenous forest.

However, they have tamed a small part of it with their orchards of guava, various types of mango, awla, cherry, lychee, lime, orange, pomegranate and chikoo trees. They also have cultural performances in the evenings.

When you are travelling from Ranakpur to Udaipur, Aranyawas is on the right hand side and a great place to break your journey. Apart from good food, they have cottages and camps also.
Lunch at Aranyawas
Now doesn't this make an interesting and cute ashtray - At Aranyawas

Two, Once Again, Famished Souls at The Aranyawas, Kumbhalgarh

After lunch, we started our approach to Udaipur. It took us about two hours (85 km) to get there via NH 27.

We had identified two hotels to stay, so after checking out the Karohi Haveli, zeroed on the second Haveli called Jaiwana Haveli.

So after a late breakfast, a late lunch, we finally had a late dinner as well at Jaiwana Haveli, Udaipur.

The first course to come right out of the tandoor was a tandoori chicken. It was lightly or rightly spiced, hot, crisp and juicy chicken served with a chutney onion rings in slightly thinned curds (very different and delectable).

This humble dal fry was one with a nice, garlicky punch. The dal itself was done to perfection and served with a tadka of garlic done just right. The dal was the top dish of the day.

This melange of flavours on our dinner table coupled with roti thrown in brought our day 4 of Rajasthan Road trip to a wonderful close. All that was needed now was their comfortable bed to climb & crash in.

Totally famished and in search for some breakfast, but the 4th Day called for our necessary drive from Jodhpur to Pali to Udaipur. 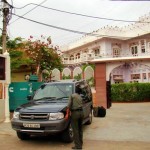 Day 4 was an easy drive through the greener pastures of the desert state of Rajasthan. The only let down was non-availability of a sumptuous breakfast before the drive at the time of departure.

The drive took us through Bali where we met the people behind “Educate Girls”.

Onwards to Udaipur, we paid our respects at the Ranakpur Jain temples and then crossed through the abode of Maharana Pratap, the Kumbhalgarh Wildlife Sanctuary. Of course, there was some natty food to go with the drive too, but outside Jodhpur.

The Blue City will be visited again, since this visit did not do much justice to it.

Nazeer Foods - A Relatively Good #Nihari & #Biryani in #Gurgaon - I can confidently say that Nazeer Foods Gurgaon makes one of the better Nihari in #Gurugram. Read all about it at the link below gosumitup.com/nazeer…